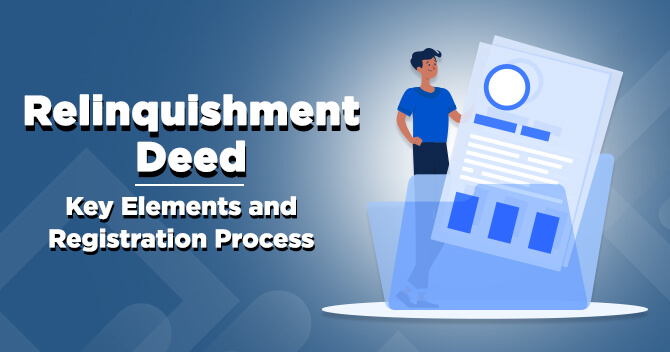 Many people avoid creating a will for years. And many times it happens that a person dies without one. When a person dies without a will, it is said that the person died “intestate”. In such a case, when a person dies “intestate” the property of that person is inherited by his/her legal heir. Now, if there are two or more legal heirs and they wish to separate the property further, they can resort to the relinquishment deed which allows a smooth transfer of property. Relinquishment deed is a legal document where a legal heir gives up his legal rights in an inherited parental property for another legal heir such as his mother, son, daughter, brother, sister etc. The process of transferring property from one co-owner to other co-owner with or without any consideration is known as “Relinquishment of Property”.

Points to be considered on Relinquishment of Property

Key Components of the Relinquishment Deed

Note: The unregistered relinquishment deed is not a valid deed and cannot be contested in the court.

The validity of Relinquishment Deed

Deed of relinquishment is considered valid only when the following situations are fulfilled:

Read our article:Commencement of Winding Up of a Company by Tribunal under Companies Act 2013

Can a Relinquishment Deed be challenged?

Generally, any registered deed cannot be revoked simply on the grounds that the person transferring his/her claim over property has changed their mind. Relinquishment Deed can be challenged based on the same grounds used for revoking a general contract. It can only be revoked when there is a lack of consent and not as per your wishes.

In order to revoke a Relinquishment deed, both the parties involved, i.e. the person who relinquished his property and in whose favour it was relinquished, must give their consent to the cancellation. If the beneficiary of property is unwilling to cancel the deed, you can approach the Civil Court for cancellation of the deed. The time period available for challenging a Relinquishment deed is three years as per the Limitation Act.

Read our article:New Winding Up Companies Rules (2020) under Companies Act 2013

How to Send a Legal Notice for...

over the years we have observed a gradual shift from traditional money remittance methods like money orders, cash,...