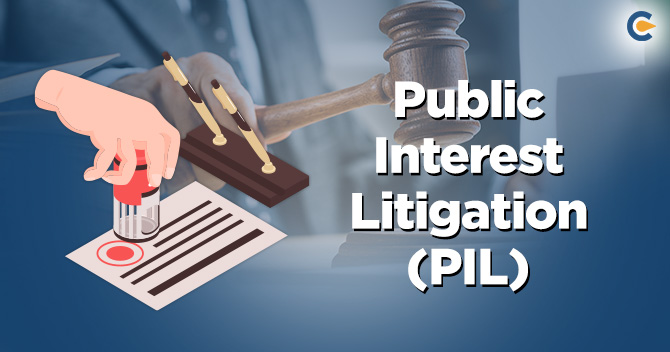 Being the sentry of constitutional, statutory rights, Judiciary plays a vital role in the legal system. It can examine administrative and legislative actions on the foundation of constitutional law. For the implementation of fundamental rights, one has to opt for Supreme Court directly by requesting Writ Jurisdiction.

With litigation waived around high cost and complicated procedure, it fails to offer fair access to jurisdiction in respect of millions of underprivileged masses. The Supreme Court of India is the only body that is responsible for the proper establishment of Public Interest Litigation (PIL).

Who is eligible to file PIL?

Any Indian citizen can file the Public Interest Litigation through the proper channel. It should be noted that the PIL cannot be filled with a private interest. Instead, it has been developed over the year only to provide strength to the public interest.

What is the PIL Filling Procedure?

One must do a comprehensive research before the filling of Public Interest Litigation. The petitioner must get in touch with all affected interest groups and jot down all the weak point before addressing the court.

Next, gather all the pertinent documents and information to back your case. As per the law, you are entitled to appoint an advocate for your case. However, if you wish to fight the case on your own, then you must confront the court’s guidelines thoroughly.

If you are conducting the same procedure with the Supreme Court, then make sure to file five copies of the petition before the court.

What is the cost associated with PIL?

In context to conventional court cases, Public Interest Litigation is cheap. A fee of Rs.50 has to be paid for each respondent and later attach it with the petition. However, the cost of hiring an advocate may vary to a great extend. The experienced lawyers are more likely to charge big money as compared to the new one.

What is the difference between the Writ Petition and PIL?

Writs are filed in the context of the private interest; meanwhile, Public Interest Litigation is entirely dedicated to the public interest.

What are the issues not served by PIL?

As per the Supreme Court guidelines, PIL is only intended to serve a specific interest, not the following matters.

PIL in the context of Indian Law

In Indian law, PIL means lawsuits for the assurance of the public interest. It is litigation presented in a court of law, not by any other private party. It is not mandatory, for the exercise of the court’s discretion, that the victim should personally approach the court[1].

PIL has today acknowledged as a powerful weapon to combat political anarchy and social persecution. The judicial communications transmitted through PIL cases provide legal support against the abuses of power. The Indian PIL has developed regarding the political history of State control. It arose as a tool to rejuvenate judicial ability to motivate the government to live up to its pledges.

PIL is meant for the implementation of the legal rights of the people who are in a disadvantageous position due to poor social or economic background. Such litigation can be used for the cure of a public injury or defending interest of public nature.

Representative standing can be seen as a productive augmentation of the standing difference, which permits a third party to file a habeas corpus petition on the ground that the victim cannot address the court himself. And in this regard, the Indian concept of PIL is much more explicit as compared to Americans.

The concept of citizen standing marks a significant augmentation of the court’s rule, from a defender of personal rights to protector of the state of law wherever threatened by official anarchy.

PIL needs a judge that provides immediate relief to the victims of human rights or by exempting the suitor to verify the alleged facts which are reviewed by the court itself. If all the things are not present, the matter concurrently cannot be called a PIL.

The norms for supporting a PIL should be established to overcome prejudiced choices of the judges to treat anything under the sun as a PIL. PIL should only be used to defend the rights of the victims of political anarchy and social persecution. Problems involving political governance or unreasonable exercise of power and so on are also vital, but they should still be managed within the traditional framework of litigation.

Assets of an individual pass on via two ways after his/her demise. The first way is a Will and the second is automa...

Important clauses under the Sh...