A need emerges with the Corporate to watch out for outside trade exchanges, in the setting of sectoral tops, investment tops, to go around from the enormous penalties. FEMA compliance plays an essential role in the growth and success of various sectors in India. The purpose of introducing the Foreign Exchange Management Act, 1999 (FEMA) is to smooth external trade, maintaining a healthy foreign exchange market in India, promote the importance of balance payments.

India adheres to stringent compliance for cross border transactions. Often companies have to go through a cumbersome and irritant process while going through cross border transactions. An increase in inbound outbound flow of funds has also led to increase in the level of check on compliances in the milieu of foreign exchange. A need emerges with the Corporate to watch out for outside trade exchanges, in the setting of sectoral tops, investment tops, to go around from the enormous penalties. FEMA compliance plays an essential role in the growth and success of various sectors in India. The purpose of introducing the Foreign Exchange Management Act, 1999 (FEMA) is to smooth external trade, maintaining a healthy foreign exchange market in India, promote the importance of balance payments. 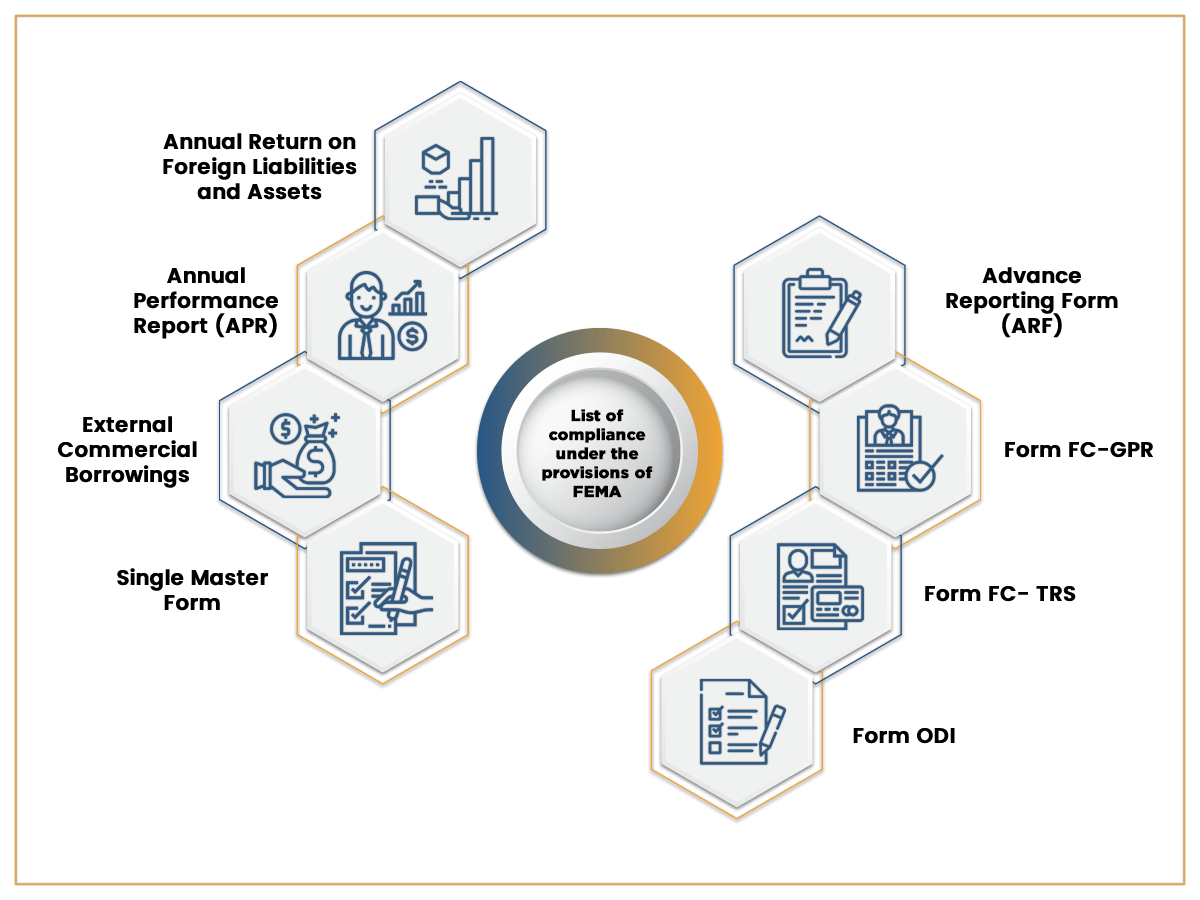 FEMA considers all forex-associated offenses as civil offenses whereas FERA considers them as a criminal offense. It can be counted as one of the features of FEMA.

Other essential features and guidelines of FEMA compliance are as follows:

If any individual fails to comply with the norms, orders, and provisions of FEMA is liable for penalty. The penalty to be charged is up to thrice the sum involved in such contravention or up to Rs 2lakhs. Further penalty, which may reach out to rupees 5,000 for each day post the first day during which the contravention proceeds. Hence, it is wise of you to stick to all the compliances of FEMA.

What is FEMA limit?

Under the LSR plan of FEMA, a resident Indian, NRI, or remote national can send cash from India to outside nations up to 2,50,000 USD in one monetary year without looking for endorsement from RBI or central government.

What is FEMA violation?

The Foreign Exchange Management Act, 1999 (FEMA) is an Act of the Parliament of India "to consolidate and amend the law relating to foreign exchange with the objective of facilitating external trade and payments and for promoting the orderly development and maintenance of foreign exchange market in India".

RBI issues this form under Foreign Exchange Management Act, 1999. At the point when the organization gets the foreign investment and against such investment it distributes its shares to such outside investors. It becomes the obligation of the organization to file subtleties of such allotment of shares with the RBI within 30 days and for that organization needs to utilize the form FC-GPR (Foreign Currency-Gross Provisional Return) for submitting subtleties with RBI.

Who is an authorized dealer?

An Authorized Dealer (AD) is any individual explicitly approved by the Reserve Bank under Section 10(1) of FEMA, 1999, to deal in foreign exchange or remote securities and regularly incorporates banks.

What is the difference between FERA and FEMA?

What are the main objectives of FEMA?

The principle objective behind the Foreign Exchange Management Act (1999) is to unite and revise the law identifying with outside trade with the target of encouraging outer exchange and payment. It was additionally figured to advance the efficient turn of events and support of outside trade showcase in India.

What is LRS limit?

The Liberalized Remittance Scheme (LRS) of the Reserve Bank of India (RBI) permits occupant people to transmit a specific measure of cash during a budgetary year to another nation for venture and consumption. As per the predominant guidelines, inhabitant people may dispatch up to $250,000 per money related year.

Form FC-TRS stands for Foreign Currency Transfer. This form is filed at the time of transfer of shares or convertible debentures of an Indian company from a resident to a non-resident/non-resident Indian or vice versa with the purpose of sale.

What are the guidelines of FEMA compliance?

Why is A2 form required?

The model arrangement requires the remitter to announce what the remitter proposes to do and not what he won't do. The A2 structure ought to be abstained from for settlements up to US $ 25,000 for each annum and any answering to the RBI for parity of instalments purposes ought to be filled by the AD and not the remitter.

What is the penalty for violation of FEMA?

Any contradiction, under FEMA, may welcome after sorts of punishments: If, the sum against which offense is amounts, at that point punishment will be "THRICE" the total associated with negation. Where the sum can't be measured the punishment might be forced upto two lakh rupees.

How much does LRS cost?

The Municipal Administration and Urban Development (MA&&UD) office reported Layout Regularization Scheme (LRS) for the 68 recently shaped districts and civil organization, with fundamental guideline charges beginning from ₹200 per sq ft for under 100 sq meters plot to ₹750 for plots over 500 sq meters.

Why was FERA replaced?

The Foreign Exchange Regulation Act (FERA) was passed in 1973; the fundamental reason for which was to guarantee the utilization of outside trade. The FERA was making snags in the advancement of the nation so government supplanted it by FEMA in 1999.

What is the difference between FPI and FDI?

The genuine distinction between the two is that while FDI intends to assume responsibility for the organization in which venture is made, FPI means to procure benefits by putting resources into offers and obligations of the contributed element without controlling the organization.

Allocation and Transaction of Business Regulations for...