Grab all the benefits for the investors by Changing Share Capital of the Company! CorpBiz professionals will assist you to plan seamlessly at the least cost, ensuring the successful completion of the..

Issue a Notice to the board members and hold theBoard Meeting

Notify the ROC about the change in the share capital

The amount of capital to invest in the Company is one of the most critical decisions that have to be made by the supporters when a company is in its incorporation stages. As the business begins to pick up, the Company may look to expand its operations, expand in size, scale, or structure. To make that dream a reality, it may require the driving of more funds into the Company, basically increasing/Changing the share capital of the Company. Sometimes, the amount of necessary capital might surpass the limit of the authorized capital at the time.

The word capital signifies 'Share Capital' of the organization where the rupees divided into a predetermined number of shares of a fixed amount. Every Company requires cash in the form of share capital to maintain the business. The organization utilizes cash to meet its necessity by the method of gaining business premises and stock-in-trade and so on.

The Company having Share Capital if so authorized by the Article of Association, can modify the Share Capital. In this case, the Company needs to follow the technique as recommended under the Companies Act, 2013. For the increase/Change in share capital, it is required to acquire the approval of the registrar of companies by filing required forms.

The provision of section 61 governs the Change in share capital in the organizations, read with section 13 and 64 of the Companies Act 2013. According to Section 2(8) of the Companies Act, 2013, 'authorized capital' or 'nominal capital' signifies such Capital as approved by the memorandum of a company to be the most considerable measure of the share capital of the organization.

In this way, it is clear that employing the previously mentioned definition, an organization can extend its business up-to the level of authorized Capital. If you need to expand your business by infusion of more funds, at that point first, you need to grow your approved Capital by following a couple of steps, as discussed ahead.

What are the Characteristics of Change in Share Capital?

What are the Kinds associated with Change in Share Capital?

As provided in Section 61 of the Companies Act, 2013, different types of Change in Share Capital are associated.

What are the Extensive Types under Change in Share Capital?

Kinds of Change in Share Capital under Section 61 of the Companies Act, 2013 are as follows:-

The share capital is that portion of a company's equity, which has been established by issuing shares and exchanging them to stockholders in exchange for capital (cash or other events). Authorized Share Capital means the nominal capital, with which the company was consolidated.

The company can also fix Change in Share Capital by consolidating the smaller classifications shares into broader classifications.If consolidation and division appears in changes in the voting percentage of shareholders, it must not take effect except the Tribunal confirms it subsequently:

The company can go for Change in Share Capital by transforming the fully paid-up shares into the Stock. The re-conversion of the stocks toward fully paid up shares can also be done additionally. The Conversion of loan into equity share capital is the standard & reliable model to raise capital without direct investments. In pursuant to take out a smooth business in India at times, in that case, the debt gets transformed into share capital.

The Companies Act, 2013 has emerged with new provisions for the conversion of loans into equity shares, and the same is included in section 62(3) of the said Act. According to provisions of section 62(3) of the Companies Act to convert the loan into share capital, the company has to take a loan on the terms that the loan will be transformed into share capital.

In this prototype, the company sub-divides its shares in a smaller amount than that of what established by the Memorandum of Association. "Subdivision of share certificates" means a separate document needed by a shareholder for a serving of his holding. This is where shareholder demands smaller number of shares than he holds. Considering the Rule 6(1) of Com (Share Capital and Debentures) Rules, 2014, Capital distributes by means of subdivision of share certificates.

Whenever there is a subdivision of shares, the company changes the composition of its share capital by Changing/increasing the number of shares issued initially and decreasing the par value, respectively. Consequently, the value of each share is decreased, and the number of total shares is developed. The class of shares and the full amount of shares announced remain consistent.

If any person does not take shares, and/or diminish the amount of share capital by the number of shares, it is so called Cancellation of Share Capital. The Reduction of Share Capital means reducing issued, subscribed, and paid-up share capital of the company. Earlier, the reduction of the share capital was administered by section 100 to 104 of the Companies Act, 1956. Now it is operated by section 66 of the Companies Act, 2013. As per the old Act, it was subordinated to the confirmation of high court, but under the new Act, the high court's said authorities had been transferred to National Company Law Tribunal (NCLT).

Buyback of shares and redemption of Preference Shares is also a reduction of share capital but governed by specific provisions prescribed under Act. Such decreases in the Form of buyback and recovery do not require sanction/approval from Tribunal (NCLT).

Documents required for General Changes in Share Capital including Annexure- B

What is the procedure accompanied for Change in Share Capital?

The Procedure followed for the Change in Share Capital in brief is follows: 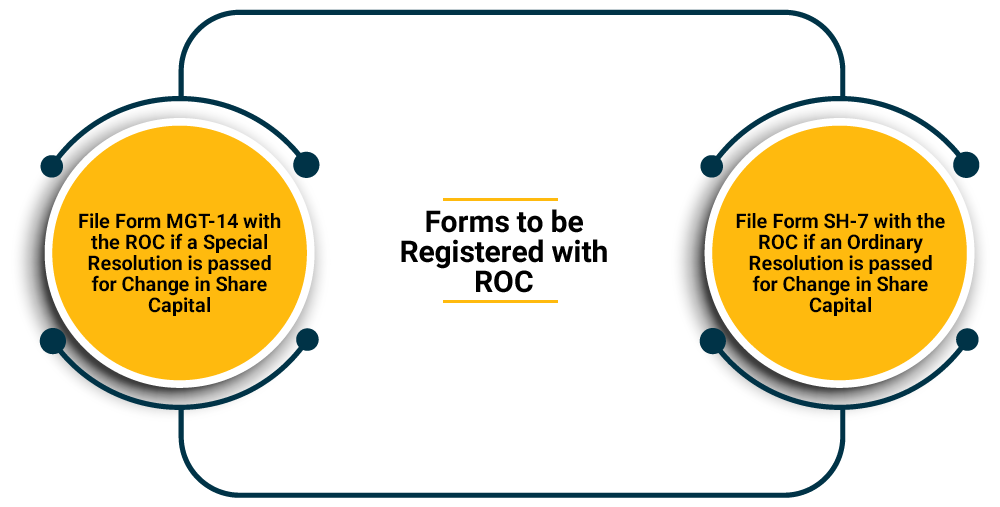 The above forms should get filed with the designated fees by the Ministry of Corporate Affairs. If the Forms discussed above are not registered with the (ROC) Registrar of Companies, in those case (Section 117 of the Companies Act, 2013) the company must be liable for a fine which shall not fall below five lakh rupees and may reach up to 25 lakhs of rupees. Every officer who is in default will be liable to pay 1 lakh rupee and which can be increased to 5 lakhs of Rupees.

Detailed Steps for Change in Share Capital with CorpBiz Professionals

CorpBiz professionals shall be at your disposal to assist you in the procedure of Change in Share Capital of your Company. We will plan ideally and will make sure of the successful completion of the process.

A modification in the number of shares.
If an organization wishes to expand its paid-up capital, it can expand it by offering the Right Issue of shares. The right Issue can be offered to current investors under a plan of workers' investment opportunity, subject to a special resolution passed by the organization.
The measure of share capital can be either expanded or decreased. In either case, the Companies Act manages the methods for such changes. The share capital can be changed via a share issue, Issue of alternative rights or other unique rights, an increment from reserves, or interest in share capital.
Capital reorganization is a critical change in Share Capital to an organization's structure. Capital redesigns include: Reducing share capital. This might be finished by uniting shares, or by lessening the par value of shares.
The fundamental difference between the authorized share capital and paid-up share capital is that the authorized share capital is the most significant value of shares that an organization can issue to its investors. While a Paid-up Capital is the piece of approved share capital for which the shares were given to the investor.
A company can raise share capital from the primary market by means of various methods. The methods may induce public issues, offer for sale, private placement, right Issue, and tender process. This is the most famous method of rising for long term capital. It expresses the raising funds directly from the public.
If the authorized by its articles, a company may utilised any undistributed profits to the company's share premium account or capital redemption reserve to finance an issue of wholly or partly paid-up bonus shares in proportion to their existing holdings.