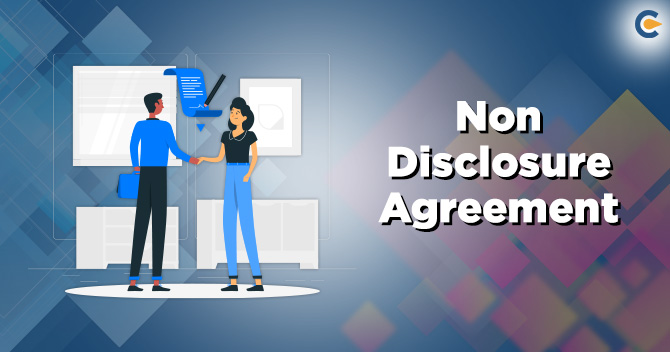 To protect the information, a person often takes great measures. If any wrong hands receive the certain information which a party wants to protect, can destroy a business, can ruin reputation, harm someone’s political careers, or violate the privacy of any person.  NDA’s or Non – Disclosure agreements are the legal agreements that can compel a party to keep quiet about the information. Information can be related to any trade secret or other confidential information about the second party.

To put this simple, we can say that if any person discloses any prohibited information after signing, the agreement can be sued for damages. For suing the party for damages, it’s important to make the agreement legally enforceable.

In India, Non – Disclosure agreements are governed by Indian Contract Act, 1872. To make it valid and, enforceable agreement should be stamped.

Non Disclosure Agreements can be used for number of purposes where the subject’s silence is desired. There are common uses of an NDA include, which are limited to the protection of the following;

Different names of NDA agreements are referred but share the same meaning;

Every NDA has contained some exclusion from the requirements of another party (Receiving). The reasons behind exclusion are to address those situations, which can make it hard for the other side party to keep the information confidential.

Some of the exclusions are;

Non Disclosure agreements can also deal with the situation where the recipient of the information is compelled to reveal the information through legal way. Recipient shall have the right to disclose the information on court orders, without breaching the NDA.

Key functions of the Non–Disclosure Agreement;

Typically NDA serves three key functions which are as;

Benefits of signing the Non-Disclosure Agreement;

Issues can be raised due to NDA;

Situations when NDA shall be drafted;

During the following situation NDA shall be drafted

Following are few examples which can be covered by NDAs:

While drafting the NDA, following things shall  be kept in mind;

When are Non-Disclosure Agreements valid?

Lawyers can challenge the enforceability of NDA in court of law. Most common challenges are like;

NDAis required to be drafted in much reasonable manner; the criteria of drafting can vary by jurisdiction. Court will enforce the NDA if they are unreasonable, vague, and burdensome.

If the party is looking to enforce the secrecy of provided information fails to safeguard it from their side or any breach occurs, NDA shall not be considered to enforcement.

The penalties over the breach of the contract are generally specified in the agreement itself, and breaks or infringement is accordingly dealt with. If in any agreement the sanction is not specified, it is clearly added that the humam guilty of violation or breach of contract shall be sued for such misappropriation

Non Disclosure agreements are governed by Indian Contract Act, according to which it is not mandatory to register the NDA. However, the registering of NDA makes it easy to prove the validity of NDA.

Knowing the violation of NDA

If any party comes to know or suspect that the confidential information covered under the NDA has been shared in the public or trade secrets of business of the business are leaked, it requires quick attention. For a party, it is important to gather all the information related to leaked information, like from where it got leaked, who has leaked it. After this, the individual shall hire an attorney who has experience in IP and shall sue a person responsible.

In India, Non Disclosure agreements are on the rise these days. Law governing these agreements is the Indian Contract Act, 1882. There are many crucial circumstances and situations where the use of NDA can be very beneficial. Such situations can be like tie of employees who are working over the patentable technology, where the employer intends to apply for the patent. Non – Disclosure agreements are playing a very important role in India as Outsourcing business is very burgeoning. It’s important to stamp the NDA to make it valid, enforceable document. NDA creates a confidential relationship between the parties and protects the proprietor information or trade secrets.

Read our article:Prohibitions and Restrictions Regarding Political Contributions

Underlining the Position of Pe...

Previously, carrying business activities were not that cumbersome, at least from a legal standpoint. But from the l...

Death is inevitable, and there is no way one can avoid it. In legal purview, the transfer of property of the deceas...