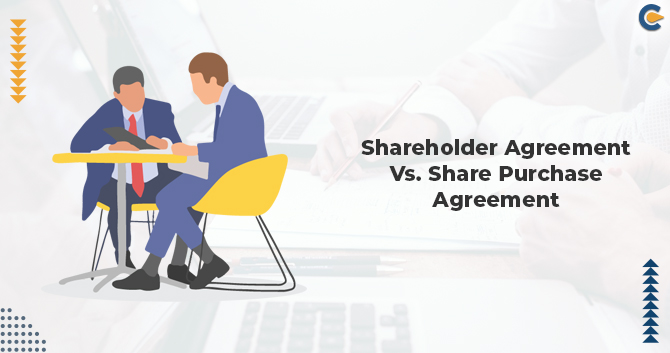 Shareholder’s agreement is primarily entered to rectify the disputes that occurred between the company and the Shareholder. Meanwhile, the Share Purchase agreement is a document that legalizes the process of transaction of share held between the buyer and the seller. In this write-up, we would look into some fundamental differences between these two terms.

Understanding the Significance of Shareholder Agreement

Maintaining a healthy relationship with shareholders is a tedious undertaking for any company. Shareholder agreement bridges the gap between the company and shareholders which are likely to turn into conflict in the future.

Every company (including the one witnessing impressive growth) once in a while run into a state of crisis where they find it hard to obliterate disputes with their Shareholder. And that’s where a shareholder agreement comes in handy. It brings transparency to the company-shareholder relationship by getting rid of prejudice[1] and potential barriers that could prove detrimental to the business in the future. Shareholder agreement helps secure the Shareholder’s investment and lays down the rules for the members and other individuals related to the company.

A shareholder agreement is a mechanism that safeguards an organization from losses & protects the company interest. It is intended to ensure that shareholders are treated fairly. The agreement contains a section manifesting the fair pricing of the shares. It also empowers shareholders to decide the criteria for Shareholder’ selection and the protection of minority shareholding in a company.

Read our article:Shareholders Meeting is Crucial to Your Business. Learn Why!

Insertions of a Shareholder Agreement

Many startups and entrepreneurs will intend to draft a shareholders’ agreement for the initial parties. This is to make sure of what parties originally proposed; if some dispute comes to light as the company thrives and changes, a written agreement can get rid of issues by serving as a reference point. Entrepreneurs may also wish to incorporate shareholder eligibility criteria and measures to counter issues raised by active Shareholders’ unavailability.

Startups need to make sure that the shareholder agreement consolidates the following clauses and sections:-

The aim of the share purchase agreement is to prove that both the parties agreed to the conditions and how much amount of shares is to be transferred from the seller to the purchaser at what cost.

Technically, such an agreement refers to a legal contract between the purchaser and the seller. It includes a specific number of shares that are subjected to trading at the predetermined price. This agreement proves that conditions that laid the foundation of the contract were agreed upon mutually.

Share purchase agreement safeguards the interest of both parties during the transaction of shares. Being a legal contract, it encompasses various facet of the transaction. Both parties must go through the clause cited in the agreement and understand it’s thoroughly. Any transaction of shares that occur without a legit paperwork often gave birth of innumerable disputes. While transferring shares to another party, the seller must understand the significance of the share purchase agreement to the fullest and should draft it under the expert’s supervision.

From the information above, it can be summarized that every legal agreement, whether share purchase agreement or shareholder agreement, is entered into to safeguard the investor and the organization from any future disputes. Both agreements are distinctive and have an unparallel significance.

You don’t need to enter into an agreement to sell or buy a share, but it is always imperative to give such transactions a written form to avoid future contingencies. Consider dropping your queries in the comment section if you need some help or clarification on this topic.

Read our article:What is Share Purchase Agreement in NBFC?

While there is no compulsion to possess a Terms and Conditions agreement, there are plenty of reasons to having one...

The share purchase agreement (SPA) refers to a legal document that outlines the buyer and seller's role for a given...