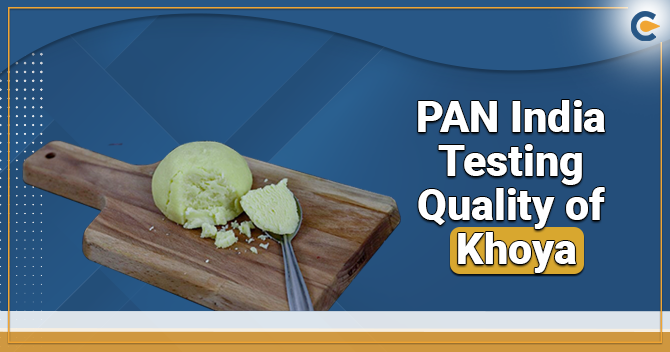 Khoya or Mawa is a food ingredient that is high in demand throughout the year and especially during festivals as it is used for preparing numerous traditional Indian sweets. As khoya is a multipurpose ingredient it can also be used for preparing different varieties of sweets like barfi, kalakand, peda, halwa, milk cake etc. Food Safety and Standards Authority of India (FSSAI) is a statutory body under the Ministry of Health & Family Welfare, Government of India. FSSAI is the authority to keep a check on the quality of food and constantly monitors and comes up with guidelines to check that the food is proper and safe for human consumption. The FSSAI on Khoya quality testing has issued a notification for the same after receiving several reports on manufacturing and marketing of adulterated Khoya.

Reason for Notification Circulated by FSSAI on Khoya Quality Test

The Sweets and Namkeen manufacturer’s federation met the CEO of FSSAI and reported the issue of Khoya adulteration which was supplied to them. Consequently, the Department of Food Safety, Delhi conducted a pilot survey under the supervision of FSSAI, where from 31st August to 4th September 2020 they placed Food Safety on Wheels (FSWs) at Mori Gate Khoya Mandi in Delhi.

During this survey, the FSW staff tested the Khoya samples for 3 parameters i.e. Titratable acidity, added sugar in Khoya and the maximum added starch. Also a small part of the sample from the Khoya was sent to the Laboratory of State Food Testing for testing of other five parameters i.e. Neutralizer, Urea, Baudouin, B.R. reading and Detergent.

Therefore, because of the failure in collecting samples during the pilot survey in Delhi the Food Safety and Standard Authority of India announced and came up with the new notification for all the Food business dealers and the Food regulators.

The Food Safety and Standards Authority of India (FSSAI) initiated a nationwide examination across the country i.e. Pan–India Khoya Quality survey. Thus, FSSAI on Khoya or mawa quality testing has issued the notification to improve and check the reports of manufacturing and marketing adulterated Khoya across the country.

Read our article:Let’s Understand the Process for Obtaining an FSSAI License Number

Details on Notification of FSSAI on Khoya Quality Test

The Commissioner of the Food Safety in all States and Union Territories has requested to choose Khoya mandis in their concerned States or UTs particularly in big cities. They have placed the Food Safety on Wheels (FSWs[1]) for 5 days from 12th to 16th October 2020 in few selected khoya mandis and motivated the Khoya buyers to get their Khoya samples tested under FSSAI on Khoya quality test.

Further, few of the points concerning the new notification on FSSAI on Khoya Quality Testing are given below:

Purpose of Testing Quality of Khoya

The purposes of FSSAI behind testing quality of khoya are given below, which are as follows:-

After going through the sample testing procedure and complying with all the steps given above the FSSSAI decides as to the extent and proportion of adulteration in the khoya.

FSSAI on khoya quality test has taken into consideration the results of the surveys and available testing infrastructure. FSSAI has decided to focus on the three areas: continued surveillance, testing and corrective measures for implementing and monitoring the manufacturers and dealers to strictly avoid adulteration of khoya and more consumer engagement.

FSSAI has provided with upgraded testing infrastructure and high end precision test equipment for continued surveillance and for keeping up the rapid testing of the same. Moreover, FSSAI has notified National Accreditation Board for Testing and Calibration Laboratories (NABL) and other public food laboratories for testing, regulatory measures and conducting surveillance that can be used by the states to complement testing. Thus, FSSAI on khoya quality test has the aim to prevent adulteration of khoya and to promote distribution of safe khoya with the objective to secure public health and life.

Read our article:Everything you need to know about FSSAI License Renewal & Validity

What are the Benefits of Eatin...

To understand the benefits of eating house license, we must understand about the first and foremost what is an eati...

Food truck marketing plan is the way through which food truck businesses can score well on all the grounds by stick...