Is it Legal to sell Homemade Wine in India? 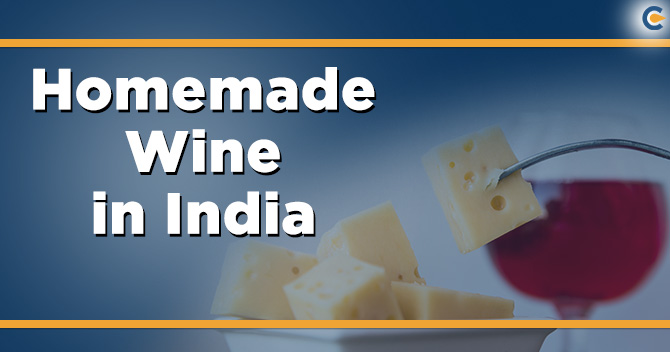 There are various production laws for wine in India. India has not customarily a wine-drinking nation. The production & consumption of wine in India is almost negligible as compared to other countries because of restrictions in India. There are high prices of wine as compared to spirits like brandy and whiskey made in the country. In Maharashtra, there is a Champagne Indage’s plant, which signifies the production of wine on an organized scale in India. Commercial wine manufacturing has come into existence in the 1980s in India.

Is it really Legal to have Homemade Wine in India?

YES, it is absolutely legal to make wine or brew beer at home in India but only for personal use except in states where it is banned totally like in Bihar, Gujarat, Manipur, Lakshadweep, and Nagaland. There is no restriction imposed by state laws in India that one cannot make brew beer or make wine at home, but it is only for personal use and not for any commercial purpose.

One can make wine or brew beer but must consider some points:

Types of Wines in India

Production of Wine in India

India has around 123,000 acres of vineyards, in which only 1% is utilized for wine production. There were 6 working wineries when India’s first wine production was set up in the 1980s. However, manufacturing is consequently expanded rapidly; it is was at approx 13.0 million liters in 2010. There are presently various wine production laws.

Wine laws on production in India

Licenses of Wine in India

Licensing procedures is differ from the state by state. Few states do not allow the sale and manufacture of liquor. Some prohibition on the sale of liquor beverages. The state-run restraining infrastructures which control the distribution of liquor. In general, individuals must have a Liquor license to deal with liquor beverages. In some other states, licenses are further described to take into consideration things like room service sales of liquor.

Distributors and importers are mandatory to register themselves and, in some cases, label the brand with the state excise department for showcasing the label in the state. The state office charges a fixed registration expense, and registration should be renewed each year. In a few states, importers are too required to mention the MRP for the wine at the time of registration.

The state excise office gives guidelines and standards on specific labeling prerequisites for sale at the time of registration. These labeling guidelines may include:

Transport Permits as per wine laws of production

According to wine laws of production, subsequent to order from a licensed purchaser and buyer gets permits. The licensed merchant or distributor applies for a transport license from the excise office. Therefore, Licenses are normally issued after payment of sales charge (VAT), state excise tax, and other pertinent taxes.

The Indian wine industry is constantly evolving over the past 10 years. Wine in India is step by step turning into an urban Indian way of life. These import taxes in the nation reduces and also empowers the foreign exporters to exploit India’s huge consumer market. However, the wine market is biting by opening up as quantitative limitations are being lifted, import duties are being decresed, and domestic regulations are being untangled.

Read our article:Suspension and Revocation of Liquor License in India

How to get a Liquor License in...