What is minimum age of consumption of liquor? 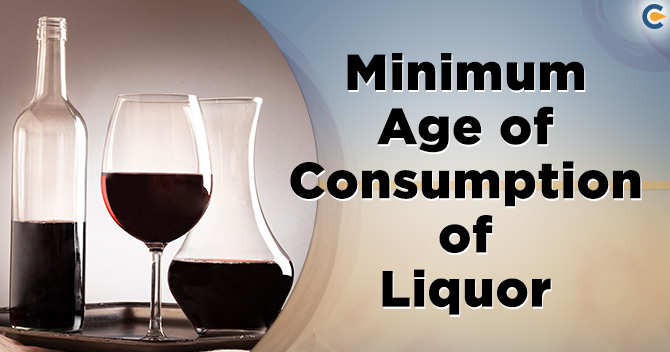 Every year government formulates the Excise Policy and approves Terms & Conditions to obtain a liquor license. In pursuance to the policy, the approved terms and conditions, licenses are granted for the wholesale supply and consumption of liquor. These were granted to a Company or a society or proprietorship firm or a partnership firm having licensed manufacturing units (distillery or winery or brewery or bottling plant).

What is the legal drinking age in different states in India?

There is a partial ban on alcohol in a few districts of Manipur. All Indian states permit alcohol consumption but a prescribed legal drinking age that ranges at different ages per region. In some states, the legal drinking age is may be different for different types of alcoholic beverages.

List of the legal drinking age in various states

In spite of legal restrictions, the consumption of liquor in India has risen over almost 72% over the period of 20 years (as per OECD figures) because the laws were generally not followed in a customer-business relationship.

The maximum permitted ABV is 45.5%. Since consumption of liquor and distribution laws are governed differently in different states, each state has its own age criteria when it comes to the legal drinking age.

Here is a list of the legal drinking age in various states:

Note: Alcohol is the subject in a State List under the Seventh Schedule of the Constitution of India. Hence, the laws governing liquor license varies from state to state.

The (BAC) blood alcohol content legal limit is 0.03% or 30 mg alcohol in 100 ml blood. On 1 March 2012, the Union Cabinet has approved the proposed changes to Motor Vehicle Act. Higher penalties were introduced. It includes fine from ₹2,000 to ₹10,000 and imprisonment from 6 months, which extends up to 4 years. Different penalties have been assessed depending on the blood alcohol content at the time of the offense.

Dry days are specific days when a sale of alcohol is not permitted. Most of the Indian states observe dry days on major national festivals or any occasions, for instance, Republic Day (26 January), Independence Day (15 August), and Gandhi Jayanti (2 October). Dry days are also observed during the elections in India.

ICAP has gathered information from over 100 countries around the world that have a minimum age for legal purchase and consumption of alcohol. The minimum legal purchase has both on and off-premise and by beverage type (beer, wine, and sprits).

World Health Organization defines on and off-premise as follows:

Liquor in Indian states is generally sold at liquor stores, hotels, restaurants, bars, clubs, pubs, and discos but not online. Some states such as Kerala and Tamil Nadu prohibit the private parties from owning liquor stores making the state government a sole retailer of alcohol in those states. However, in other states, liquor may be sold at groceries, departmental stores, banquet halls, and farmhouses. Some tourist areas have special laws that allow the sale of alcohol on beaches and houseboats.

Read our article:Suspension and Revocation of Liquor License in India

In order to sell alcohol, one needs to procure a liquor license in India. Usually, liquor stores, pubs, clubs, disc...

How to apply for Liquor Licens...

Restaurant liquor in a bar, a pub, a hotel, and so on is legal, only if the seller holds a valid liquor permit, whi...