Terms and Condition for Grant of Liquor License in Delhi 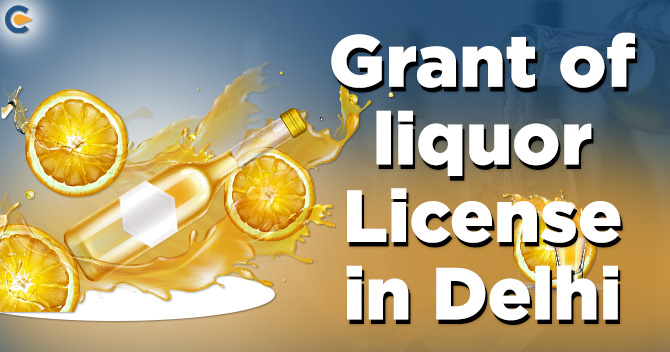 Liquor license is issued only after scrutiny to all the details of the license holder because selling Liquor without a license is an offense under various state laws. The Delhi Liquor License Rules, 1976, pronounces types of licenses that serve liquor in a State. Besides this, the Act ensures to supply quality and safe Liquor to its consumers. The legal age for consuming alcohol has been specified in every State. Under Section 23 of Delhi Excise Act, 2010 and Delhi Liquor License Rules, 1976, the legal age for alcohol consumption is 25 years.

Types of Liquor Licenses in Delhi

Grant of Liquor License in Delhi

A person licensed to import, export and transport of liquor

No person except a licensed vendor can import, export or transport liquor, provided that-

No person must have in his possession any quantity of intoxicant, except the permissible limit of possession and retail sale as prescribed. Also, further on the condition that it must not be –

Conditions applicable to grant of a liquor license in Delhi

All passes and the Liquor license granted to cover import, export, and transport of intoxicants must be subject to the conditions-

It is provided that a pass shall be sufficient to cover the transport of intoxicants to the premises where an importer is either licensed to sell and to possess intoxicants in Delhi.

The export pass must show in all cases the quantity and strength of intoxicants to be exported and duty at the rates prevailing in Delhi has been paid, or exemption has been granted, or the bond has been executed to safeguard excise revenue.

Power of refusal to grant a liquor license in Delhi.

The Excise Commissioner, the Assistant Commissioner or the Deputy  Commissioner might refuse to grant any licenses for any sufficient reason, which is to be recorded and must not grant any such licenses if he had a reason to believe that an applicant has not paid any dues demanded from him.

Passes for an import, export, or transport of liquor and permit for possession of liquor can be granted by a Deputy Commissioner, or he can delegate his powers to any excise officer who is subordinate to him.

Extension of validity of liquor license in Delhi

The validity of liquor license in Delhi

Read our article: Suspension and Revocation of Liquor License in India

Restriction on grant of liquor license to certain persons

Persons to who licenses cannot be granted.In addition to the provisions provided in Section 13, license for vend of intoxicant shall not be given to:

Granting of liquor Licenses in Delhi

Licenses in this domain are of different kinds. The granting provisions for a few of them are as below:

The L-1 licenses are for wholesale vending to companies, partnership firms, societies, or proprietorship firms subject to the condition that the applicant has distillery/manufacturing units/breweries/bottling plants. Moreover, they have to abide by the terms and conditions ordered by the concerned authority.

The L-6 licenses are for the retail sales of foreign liquor. Issuance of this license requires to choose undertakings of the Delhi government, DTTDC, DSCSC, DSIDC, and DCCWS.

The L-9 licenses are for the retail sale of various brands of Indian Liquor and Foreign Liquor. This license was earlier known as L-52 D. To attain this license. The applicant requires to abide by the terms and conditions ordered by concerned authority.

The L-10 licenses are for the retail sale of various brands of Indian Liquor and Foreign Liquor. However, the terms and conditions for the L-9 license do not apply to the L-10 licenses.

These licenses are temporary licenses for serving liquor in the parties, functions, and conferences. The terms & conditions ordained for these licenses vary from residents, clubs, hotels, restaurants, and other premises.

These licenses are for star hotels that are approved by the Department of Tourism to accommodate the tourists. The hotel management is to abide by the terms and conditions ordered by the authorities.

These licenses are for the star hotels which are approved by the Department of Tourism. These establishments must be located in a commercial area with adequate space for parking.

The L-28 license is for clubs that have been registered with the registrar of firms or registrar of cooperative societies to provide services of foreign liquor to its club members. All clubs which agree to specified terms and conditions can apply for this license.

The L-29 license is for clubs or mess which provides liquor or beer exclusively to Government Servants, and that are not subject to commercial rates and rules. The application procedure and required documents for an L-29 license are similar to that of the L-28 license.

No Licence is required by an individual for serving liquor to his guests, and family members at his residence provided the liquor served is within permissible possession limit

Any licensee, bidder, tenderer, manufacturer or supplier, whose products are sold in Delhi can be blacklisted by a Deputy Commissioner for violation of the provisions of Act and the rules framed or for any other reason which can be considered detrimental to the interest of revenue or public health. No such order must be passed without giving reasonable opportunity of hearing to the person concerned.

Any person whose name has been mentioned in the blacklist must be debarred from applying for or holding any excise license within Delhi for such period, not exceeding five years, as may be specifically indicated in the blacklisting order. The name of the blacklisted persons must be circulated by the Deputy Commissioner to the Excise Authorities of the neighboring States.

Read our article: How much does Liquor License cost in India?