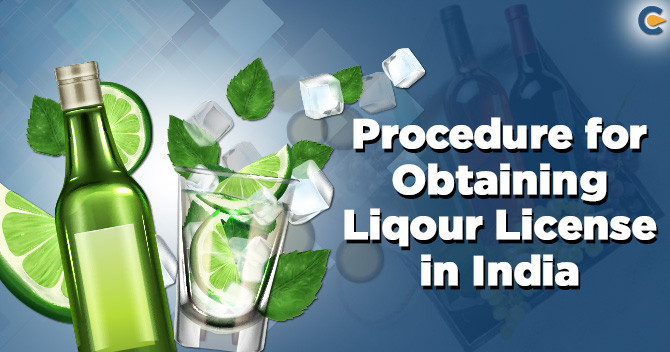 The liquor license in India for online selling of liquor is also mandatory and can be acquired from the Excise Department of the State Government. Thus, in simple legal terms, a liquor license can be defined as a license granted by the state excise department to anyone who wishes to indulge in the manufacturing, import, export, transport, possession, purchase and selling of liquor and other alcoholic beverages.

Classification of Liquor License in India

While many of the Indian States grant a single liquor license for various kinds and classes of alcohol, in some states, an application for a grant of license of a specific class is required. Therefore in states where a permit is required for different classes of alcohol.

The different set of general liquor licenses available in India are as follows:-

This type of license is granted to businesses, which in spite of offering food items make up half of their profits out of the alcohol sale.

As the name suggests, this type of license is granted to those who make/ brew their wine and beer.

What is the need to obtain a Liquor License in India?

Every state government keeps a stringent check on the sale and consumption of alcohol sold within its territory, every State has a different set of liquor laws that must be carefully observed before applying for a Liquor License. Moreover, since dealing with the manufacture, import, export, transport, possession, purchase, sale, etc., of liquor is made punishable in the absence of a Liquor License, it is mandatory for one to obtain a valid Liquor License in India accordance with the state laws.

The Ambit of a Liquor License in India

Depending upon the legislation and laws of each state, a valid liquor license in India covers a wide ambit in relation to the manufacture, import, export, transport, possession, purchase, sale, etc., of liquor. Thus a liquor license granted by the state excise department is applicable to not only to the businesses/entity involved in selling alcohol, but it also caters to few considered subjects.

In case liquor is to be served at an event/party or a marriage organized in a small town, with a population below twenty lakhs, the temporary liquor license will cost somewhere around Rs.10,000 for more than 100 members and Rs. 7,000 for less than 100 members.

As per the excise department, the FL 4 license is required for bringing in liquor in a party organized in a resort or a private flat. The average cost of an FL 4 license is Rs. 13,000.

For obtaining a Liquor License in a particular state, the applicant is required to submit an application fee along with the relevant application form. The license fee attached ranges from Rs. 5000 to Rs. 15000 or more depending upon the prevailing state laws and regulations.

How to apply for a Liquor License in India?

As each state in India has its own set of liquor laws, rules, and regulations, it is important to have full knowledge of the liquor laws prevailing in your state before applying for a liquor license. Since liquor laws of the state are laid down by the State Excise Department, anyone wishing to obtain a liquor license can inquire about the same by:

After having a fair idea about the prevailing liquor laws, rules, and regulations of the state, one can decide the type and class of license which need to apply for.

The general classes of license include:

In India, any establishment that serves alcohol must have a valid liquor license. Liquor consumption, manufacturing, and distribution are issues pertaining to the state list as per the seventh schedule of the Indian constitution. This is why each state has its own liquor laws. Even for registration of foreign liquor bar licenses, every government regulates alcohol sales to prevent minors from purchasing spirits, wine, beer, and liquor. For instance, the requirement for a liquor license varies in small towns where they often only approve a new license when the population grows.

According to the Licensing Act 2003[1], one needs a liquor license in India for selling the alcohol. This includes giving away free alcohol as it is considered an incentive to purchase or that it is included in your pricing structure. Before starting a liquor business, one has to know about the License or Government regulations and legal things, which are the most important factors before starting the liquor business in India.

Procedure to apply for a Liquor License in India

Revocation of the Liquor License

A Liquor License in India will be liable for revocation if any one of the following acts is committed by the applicant:

Validity and Renewal of License

A Liquor License has a validity of 1 year from the date of issue. After expiry, a liquor license can be renewed annually, by filling the renewal application form available on the website of the State Excise Department and paying the relevant renewal fee.

Therefore, if any person wishes to get his /her license renewed, then they must apply for same before the thirty days from the date of expiry of the license along with the payment of a renewal fee which is fixed by the State Excise Department depending upon the type and/or class of the license. There can be a reduction in the renewal fee, based upon the conduct and goodwill of the applicant.

Guides by the Excise Department

To provide safe and quality liquor to consumers, and to promote responsible drinking in India, the state excise department issues various guidelines from time to time. These guidelines are aimed at raising awareness and ensuring a safe drinking environment. State Excise guidelines include:

Liquor is more than just a drink that is served in restaurants, hotels, parties, and functions. It is associated with the complex socio-legal backdrop of a nation. Often associated with crimes and other violent activities, liquor is a sensitive issue to deal with for any state government. This is why in order to regulate and control the manufacturing, production, and selling of liquor and other intoxicants, each state government allots a liquor license in India.

Read our article:How to Get Hookah Lounge License in India? – Process & Fees

Is it Legal to sell Homemade W...

There are various production laws for wine in India. India has not customarily a wine-drinking nation. The producti...