Suspension and Revocation of Liquor License in India 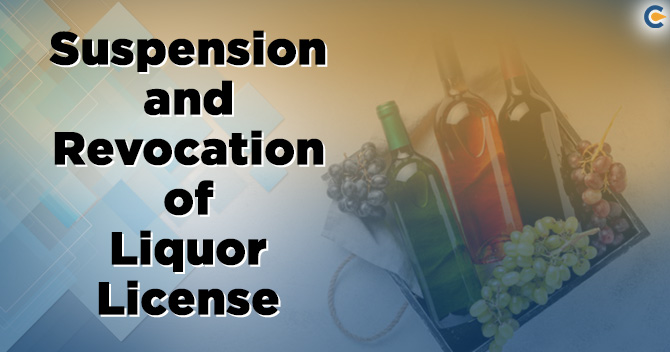 Why is liquor License revoked?

Governments have vested interest in regulating alcohol, as irresponsible consumptions can lead to some tragic outcomes. While most people use alcohol responsibly, enjoying it and use it as a social lubricant and means of relaxation, while some use it improperly. Regulation can decrease these unfortunate occurrences, deterring behavior such as drinking and driving, and other alcohol-related offenses. Facilities that alcohol is an important frontline in these efforts, that is why governments regulate the demand for sale and purchase and also provide the requirements for avoiding the revocation of liquor license.

States throughout the country regulate the sale of alcohol. They can take action to ensure their public freedom to have a good time doesn’t threaten or compromise the safety of others. Hence, one way the government enforces alcohol regulations is through license, which provides the facility of state sanction to sell alcoholic beverages. When the restaurants, bars, and other alcohol-serving facilities don’t comply with the law, they have to face the revocation of liquor licenses.

Reasons for revocation of Liquor License

Bars, restaurants, and other facilities can lose their licenses in case of non-compliance with laws regarding the sale of liquor. Some of the common reasons for revocation of liquor licenses are as below:

Serving minors – The legal drinking age is regulated by states and law enforcement. They are very vigilant in enforcing rules against serving minors. If they get caught by serving to minors, then the license will be swiftly revoked. The bartenders or servers may even face criminal charges if it is found they knowingly served to minors.

Unfortunately, many minors also try to skirt the law regarding the legal drinking age by lying about their age or presenting fake IDs. The facility’s staff needs to receive thorough training on the drinking age and why it’s important that it’s enforced. It is important to request identification for all customers who appear to be underage.

Violating time limits of serving – In many cities, licenses provide the right to serve alcohol at certain times of the day. Selling outside the premises prescribed would result in revocation of liquor license—for instance, serving customers at 3:15 a.m. when local ordinance forbids sales after 3 a.m. could be cause for revocation of license.

Improperly trained staff – All of the establishment’s staff has to meet the requirements of state and local laws during their training. In many cities, bartenders and staff that serve alcohol must follow the guidelines. If the staff is caught serving without the right certification, one could lose the license.

Over serving – Most states have laws against serving people who are obviously inebriated. If the staff serves someone who is intoxicated, and that person gets into an accident, then the establishment may not only lose its license but can also be sued by the third parties who get injured in an accident. It is important to know when to cut off customers, as it is an important part of the hospitality.

Disorderly conduct – Bars and other facilities are the frequent locations of fights, public nudity, and other disturbances that may quickly be a reason for the revocation of liquor license. It is a duty of bar and restaurant owners to maintain an orderly environment by establishing rules of conduct and strictly enforcing them.

Why is the liquor license required?

Read our article:How to apply for Liquor License for your Restaurant

How the License can be regained?

Every state process for granting and revoking of liquor licenses is different, as individual states set their own rules, within limits, for this process. There are some general steps should take to obtain a license back, these are:

Gather documentation – Get copies of all documents pertaining to the revocation, including police reports. If the facility has video monitoring, be sure to review the footage of the incident or incidents that led to the revocation of liquor licenses. The more evidence one has, the stronger the foundation for any appeal can be made. Obtaining documentation can also help in identifying problems in the business.

Appeal your revocation – In case if one knows that the revocation was unjustified, then one can appeal against revocation. Submit all the requested information to the State Excise Department to improve the chances of a regaining license.

Pay your fines – The revocation can be removed once complies with the fines and other penalties. Failure to pay fines will keep you away from getting the license back. Be sure to pay all fines and penalties in a timely manner, as it will help to get the clean slate required for a new license.

Face the tricks of revocation – If one doesn’t face the problem that led to the revocation of liquor license, then one cannot regain its license. If the problem is disorderly conduct, ban unruly customers, and train your staff to better handle situations. If problem employees are over serving or are serving minors, correct the behavior or part ways with them. If your facility is violating time limits on sales or other local rules, make sure that staff knows the compliance. Complying with the law is essential for a license.

Liquor is more than just a drink that is provide in restaurants, hotels, parties, and functions. It is related with the complex socio-legal backdrop of a nation. Often related with crimes and other violent activities, liquor is a serious issue to deal with for any state government. This is why in order to manage and control the manufacturing, production, and selling of liquor and other intoxicants, each state government allots a license in India. If the rules and laws of license are not followed, then it would result in a revocation of liquor license.

Read our article:How much does Liquor License cost in India?