Implementation of GST in place of VAT in Indian Economy 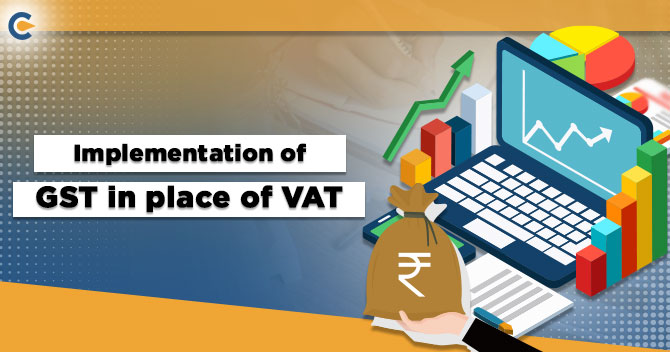 Indian Economy is one of the economies that spend a huge sum of money towards tax paid. GST had combined all the indirect taxes together and made one tax. It is applicable from the beginning of manufacturing till the end in order to maintain uniformity among the system. Implementation of GST can bring the central and sales tax together. Multiple taxes have been reduced after the Implementation of GST in the Indian Economy.

Value Added Tax is known as VAT which is an indirect tax that was introduced in Indian taxation system on 1st April, 2005. As per the concept of taxation, VAT replaced the Sales Tax in the present situation.

The disadvantages of VAT are as follows-

What is the cascading effect?

What is the Difference between GST & VAT?

GST has been designed to be a single, comprehensive, destination-based tax concept that will unify the entire country in terms of how the tax is collected. The Goods and Services Tax intends to eliminate the concept of “tax on tax” (Double Taxation) also known as cascading effects.

Indian Economy before Implementation of GST

Before the introduction of GST, the manufacturer, wholesaler, and retailer imposes VAT at 12.5% on customers.

The above table shows a clear specification about how the customers were forced to practice the multiple tax system. The tax on tax is also known as cascading effects of the tax which led in inflation in the prices of goods and services

Read our article:List of Goods and Services where GST is Applicable: Latest Rates

Indian Economy after Implementation of GST

Goods and Service Tax Act[1] was first brought by Loksabha on 29th March 2017 and was implemented on 1st July 2017. Law took initiative and combined most of the indirect taxes that existed during that period. Moreover, the multiple taxes implemented by the government GST (12%) + State GST (12%). The central excise duty, additional excise duty, special additional duty & service tax were merged into a single tax.

Benefits by the adoption of GST

The benefits are as follows-

The Short-Term Impact of Implementation of GST

From the customer’s viewpoint, they are now paying more tax for almost every goods and services they consume. The majority of everyday products draw the same or a slightly higher tax rate.

Moreover, the Implementation of GST has a compliance cost attached to it. It seems that this compliance cost will be high-priced for the small scale manufacturers and sellers. They can end up pricing their products at higher rate.

Talking about the future scenario, it is anticipated that GST would not just mean a lower tax rate, but also minimum tax slabs. Countries where the GST has helped in improving the economy, apply only for 2-3% rates – one being a lower rate for essential commodities, and a higher rate of tax for the luxurious commodities.

Presently in India, we have 5 tax slabs, with 3 tax rates – an integrated rate, a central rate, and a state rate + cess. The government is playing on lower rates due to fear of losing out revenue. This is very doubtful to see a shift anytime soon; though the government has said that rates may be revisited once the Revenue Neutral Rate is reached.

By implementing GST on goods and services, the Indian government is improving the economy by removing the cascading system of tax and reorganizing the business process in India.

Our CorpBiz professionals will be at your assistance if you want expert advice on any aspect of GST registration, implications, or compliance, and any Government Licensing. We will help you with all your compliances concerning the issues related to GST applicability-based on your anticipated activities, ensuring well-timed completion of your work.

Read our article:Implementation of Delinking Credit/Debit Notes on the GSTN Portal

All you need to Know about Ins...

The Goods and Services Tax (GST) is an indirect tax which has replaced the various indirect taxes which were being...

Goods and Service Tax on Direc...

Directors remuneration is payable for the services that the director offers. The supreme power of a company or a co...