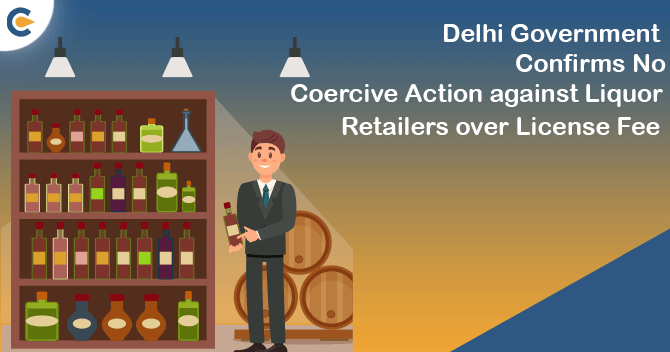 The government of Delhi on Thursday assured the Delhi HC that it would not take any Coercive Action against liquor Retailers for non-payment of the license fee under the Delhi Excise Policy 2021-22.

Senior Advocates Rahul Mehra & AM Singhvi, appearing for the Delhi government, furnished before the HC that it will not trigger any coercive action against liquor retailers. After receiving assurance from the Delhi government, Justice Rekha Palli adjourned the matter for 15 November for further hearing.

The assurance was shared verbally when the HC was hearing pleas by over various petitions challenging the government’s decision to impose licence fees w.e.f 1 November 2021.

The pleas also sought to prevent the state government from demanding licence fees or security deposits & also ordering the concerned authorities not to impose or seek license fees from the successful bidders until the state government addressed its obligations under the tender terms & the Delhi Excise policy 2021-2022.

Further clarifications made by Delhi Government before Delhi HC

Apart from assuring no Coercive Action against Liquor Retailers, the AAP government make the following clarifications before Delhi high court.

The state government has also stated that around 20 mainstream brands rule 80% of the market share in the Indian-made Foreign Liquor (aka IMFL) & 30 brands, including ten prominent brands, have already secured MRP registration in all regards between 29.10.2021 – 10.11.2021. These brands collectively dominate around 28 % of the total market share.

The Delhi government has also confirmed to the court that 10 L1 licenses have applied for registration of around 78 brands as of 11 November & no legit application of brands is pending as of date.

Moreover, the state government has also confirmed the 92 brands of overseas liquor have been examined & awaiting web-based application by the wholesaler & once legitly applied; the process will be completed in not more than two days.

The government’s[1] decision to facilitate relaxation to liquor retailers for paying license is undoubtedly an appreciable one. This will allow the retailers to seamlessly initiate their business proceeding without worrying about the cumbersome license fee.