Detention and Confiscation of Vehicles and Goods under GST- Law, and Procedures 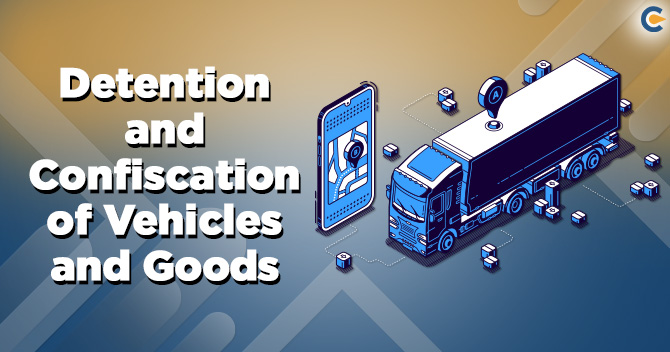 Powers related to detention and confiscation of vehicles and goods under GST must get appropriately exercised. Post the implementation of the GST regime, the generation of Eway Bill must take place in case of the movement of goods beyond the worth of Rs 50,000 by a registered person. The person who is carrying the goods of exceeding the figure of Rs 50,000 must-have documents like an invoice and an e-way bill. The propel officer has got the authority by central or state government to intercept goods in transit. The interception process involves the inspection of documents as well as goods by the right officer.

Along with Section 68 of the CGST Act, 2017, Section 129 of the same Act, in addition to Rules 138B of CGST Rules, 2017[1], provides the respective Officer with the right to intercept the vehicle. Also, it provides them with the power to verify the documents related to the carrying of goods in the vehicle.

Confiscation of Vehicles and Goods under GST

There is no provision for confiscation of vehicles and goods under GST in case the vehicle owner proves by any means that no information was available to him regarding the use of the vehicle. The tax officer shall give the option of making the payment of the fine in place of confiscation.

Quantum of Fine Imposed on Owners of Goods and Conveyance

Difference between Detention, Seizure, and Confiscation

Procedures Ahead of Detention of Vehicles or Goods

In cases where the Officer intercepts the vehicle and the person(Driver) having the conveyance unable to provide the relevant documents in front of the Officer or the Officer who is waiting to continue with the inspection process, the Officer can take the following actions (As shown in Circular No. – 41/15/2018 dated- 13th of April, 2018) given in the table provided below-

Tax and Penalty as per Section 129

Read our article: Composition Scheme under GST- The Next Big Thing

Procedure for Appeals under GS...

GST Act defines the expression “Adjudicating Authority” as the competent authority to pass any order or decisio...

Coupons and Vouchers under GST...

Since the Pre-GST period, the taxability of gift coupons and vouchers under GST are not considered as unlawful clai...