Consequences of not filing ITR: A Complete Overview 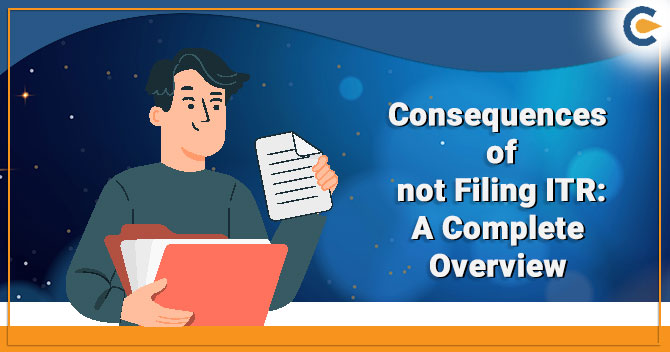 Filing an income tax return is something you can’t afford to overlook considering the repercussions that exist within the law. In the write-up, you will become accustomed to the potential consequences of not filing ITR. So let’s get started without any further ado.

The IT authority possesses the right to carry out best judgment assessment as per section 144 of the IT Act, in case of non-filing of ITR by the taxpayers. It is pertinent to note that March 31st of every assessment year is the last date for filing an income tax return. Every taxpayer must abide by this rule of filing or else penalties would be levied as per Act.

Possible consequences of not filing ITR

It is vital to remember that the IT authority has the right to carry out the Best judgment assessment u/s 144 of the Income Tax Act where the taxpayer has committed the filing default. But, section 119(2)(b) vests IT authority with the right to admit any forms or claim for an exemption, refund, deduction, or any other relief even after the expiration of the period cited under the Income Tax Act.

Read our article:Section 269ST of IT Act 1961: Explained with Examples

Apart from these repercussions, the additional penal provisions for non-filing of return as per u/s 139(1) of the IT Act may cover taxpayer whenever he/she submits the return after availing permission under section 119 of the IT Act which includes the following

If a taxpayer fails to submit a return of their taxable income on time as per section 139, then such individual may confront a penalty of

Details Regarding the Late Filing Fee

It is in the best interest of taxpayers to make a timely return considering the above-mentioned consequences of not filing ITR. The income tax department makes a continual effort to nudge down the likelihood of tax evasion by altering the existing provisions whenever necessary.  Therefore, holding ITR for unnecessary reasons could be detrimental for taxpayers both in terms of credibility and short-term benefits. Also, it is not wise to wait for the due date and expect the date extension as it entirely depends on the Government’s[1] discretion

Read our article:IT Return for the Deceased: A Detailed Outlook

There are legitimate ways to save your tax under Income Tax Act, 1961. Income Tax liability on an income is calcula...

The Income Tax Appellate Tribunal (ITAT) Jaipur bench; in an assessee-friendly ruling has held that under section '...