Significant Modifications Introduced under CGST (Fourteenth Amendment) Rules, 2020 as per Notification No. 94/2020 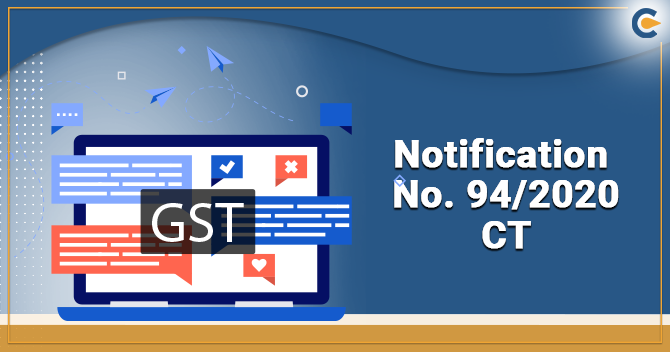 The Goods and services tax in India comprise of Central Goods and Services Tax (CGST) as one of its components. CGST is an indirect form of tax that is levied and collected by the central government on supplies between states. Though, the supplies exclude alcoholic liquor for human consumption. The taxes are implied as per the rules of Central Goods and Services Tax Act, 2017. The act was formed to provide the guidelines to regulate the collection of the tax levied on the intra-state supply of goods and services by the CG and for the other matters concerning the same. However, certain changes has been introduced in the CGST (Fourteenth amendment) Rules, 2020 to amendment in CGST Rules, 2017.

Key Provisions of the Central Goods and Services Tax Act, 2017

The Key Provisions of CGST Act, 2017 are given as below-

Read our article:The Migration to the New Tax Structure under GST Transition Process

On the recommendation of the council of ministers, the central government has notified to insert important changes introduced under CGST (Fourteenth amendment) Rules, 2020.

The highlights of the amended provisions in the existing CGST (Fourteenth amendment) Rules, 2020 are as follows:

The time limit for system-based Goods and Services registration tax has been increased from 3 days to 7 days, now. Meaning which, that now the authorised department will have review and grant Goods and services Tax registration within 7 days rather than in 3 days; which was the earlier time limit specified in the previous rules. The day counts from the date on which the registration application has been filed.

As per the Rule 9, the verification of the application is to be done through biometric-based Aadhaar authentication and taking photograph/KYC of the applicant.

In the situations, where the applicant fails to undergo the Aadhaar Card authentication or when the authorised department is suspicious and feels that the verification should be carried out physically, then the time limit for grant of system-based Goods and Services registration shall be 30 days instead of 7 days.

Additional Provisions for the Cancellation of the GST Registration (Rule 21)

More conditions have been inserted in order to cancel the registration of the Goods and services Tax.

Power has been allotted to the GST department to cancel the GSTIN. An officer of the same department can move forward with the proceedings to cancel the Goods and Services Tax identification Number of a tax payer, when the tax payer has availed Input Tax Credit (ITC) exceeding the amount than that permissible in Section 16. Clause (e) has been inserted in Rule 21 of CGST (Fourteenth amendment) Rules, 2017.

No opportunity would be provided to the tax payer to restrict the officer from cancelling his GSTIN, if the authorised officer has sufficient and reasonable grounds (if an analysis of GSTR-1 of the taxpayer and suppliers / other analysis shows significant amount of differences) to believe that the GSTIN of a tax payer is liable to be cancelled.

Restriction has been imposed in respect of invoices or debit notes, 10 % cap of claiming ITC has now been reduced to 5%. The reduction in the of 5% in ITC claims means that a taxpayer’s ITC claim shall now be restricted to 105% of the Credit reflected in his GSTR 2B. The provision shall come in force from 1st January, 2021.

Central Government on the commendations of the Council has informed the CGST (Fourteenth amendment) Rules, 2020 to amend the CGST Rules 2017. In every way, the newly introduced rules are harsher which will eventually regulate the imposition of free and fair Goods and Services Tax.

Read our article:Understanding Cases on Change in Contract Price after GST Implementation

The concept of e-invoicing is a major trick for India due to the several business transactions performed daily, wit...

Guide to E-way Bill under GST...

The E-way bill was introduced by the Central Government in April, 2018 under the Goods and Services Tax (GST). A tr...