The Migration to the New Tax Structure under GST Transition Process 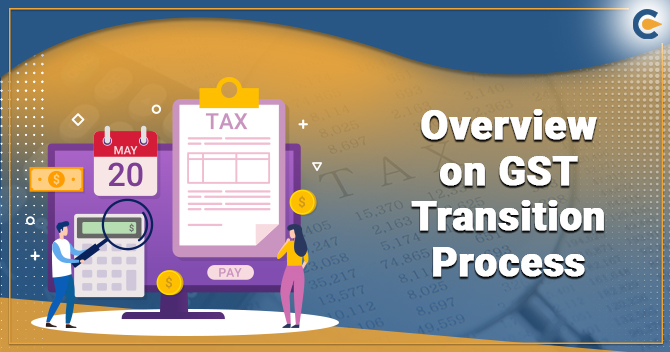 There are certain doubts among all the small and medium enterprises regarding the preparation that will be required for GST Transition Process. In this article, we will discuss how one must prepare them for the migration to the new tax structure from the current one.

Certain Provisions have been made for the smooth transition of Input Tax Credit available under Service Tax, Excise Duty or VAT to GST.  A registered dealer who selected for the composition scheme will not be allowed to carry forward the ITC available in the previous tax regime.

Some of the instances where ITC transition provisions will be applicable are as follows:-

1. Closing balance of Credit on Inputs

The closing balance of ITC according to the last return filed before GST can be taken as credit in the GST regime. After coming of GST in the year 2017, GST Transition Process started.

The credit will be accessible only if the returns for the last six months from January 2017 to June 2017 were filed in the prior regime (i.e. Service Tax returns, Excise and VAT had been filed).

Form TRAN 1 has to be filed by December 27th, 2017 to carry forward the ITC. Also, TRAN 1 can be corrected only once.

Before Goods and Services Tax, only a part of input tax paid on Capital Goods could be taken as credit.

In such cases, there may be some amount of unused credit available on the capital goods. This un-used credit can be carried forwarded to GST by entering the particulars in Form TRAN 1.

A service provider or a manufacturer who has goods left in the closing stock on which the duty has been paid can also take the credit for the same. The merchant has to declare the stock of such goods on the GST Portal.

The merchant should have the invoices for claiming Input Tax credit & the invoices must be less than one year old.

What if you don’t have Invoices?

Service providers or Manufacturers, who do not have an invoice to prove payment of tax duty are not allowed to claim the credit under the GST regime.

Only dealers can claim credit in case invoice is unavailable, subject to the following conditions:

Every individual who is:

The following conditions should be fulfilled –

ITC can be claimed by the dealer/manufacturer for those goods received after the appointed day, the tax on which has been previously paid under previous law. Above credits will only be permitted if the invoice/tax paying document is recorded in the accounts of such individual within 1st August 2017. A 30-day extension may be allowed by the competent authority on grounds of sufficient cause for delay.

This is probably the most perilous provision of transition under GST regime. Under the present tax regime, a merchant is not permitted an Input Tax credit of excise duty or additional customs against excise.

The instant result of this would be the imposing of GST on goods which are already being taxed under the existing procedure, without any credit obtainability. This may lead to distortion and cascading limits of prices.

This can also result in stock returns from merchants and traders to the manufacturers before the prescribed day, and further making a new purchase successive to that day. Such situations may lead to fright among manufacturers and in turn affect their returns and profits.

Any appeals/claims pending for the refund on the due amount of tax, CENVAT credit, or interest paid must be disposed of as per the previous laws. The GST Transition Process for refunds and arrears will be applicable after 1st July, 2017. Moreover, any amount payable under previous law will be treated as arrears of Goods and Services Tax and be recovered as per the GST provisions.

No tax must be payable on Inputs, semi-finished products removed for job work for carrying certain processes and returned on or after 1st of July

Conditions when there is no tax payable:

GST Transition Process will be applicable in cases where the service was received prior to the 1st of July and the invoices received on or after the 1st of July. Input Service Distributor will be eligible to distribute ITC under GST.

GST Transition Process will be applicable on new tax regime where the taxpayer has to keep himself/herself aware regarding the implications that the migration from the old regime to the new regime may have. At this time of transition, such migration is anticipated to have a large impact as the limit of the turnover under GST is INR 50 lakh, as against the existing INR 10 lakh.

Therefore, it would be fair and safe to assume that many taxpayers will move from being regular taxpayers to paying taxes under the composition scheme.

The opposite of this would be wherein merchants, who are under the composition scheme, would be transformed into a being regular taxpayers. This may happen if the goods they are dealing in do not qualify under the exemption list of the new regime.

Goods and Services Tax combines multiple taxes into one. It is necessary to have rules & regulation in place to make sure that a registered business runs smoothly for GST Transition Process in India. Certain Provisions have been made for the smooth transition of Input Tax Credit available under Service Tax, Excise Duty or VAT to GST.  A registered dealer who selected for the composition scheme will not be allowed to carry forward the ITC available in the previous tax regime.

Read our article:List of Goods and Services where GST is Applicable: Latest Rates

Things you Must Know About Int...

GST implementation has revolutionized the Indian taxation infrastructure by subsuming various taxes under one hood....

GST council has introduced a composition scheme under GST to reduce the costs for small taxpayers, along with simpl...