When to Surrender NBFC Registration and its effects 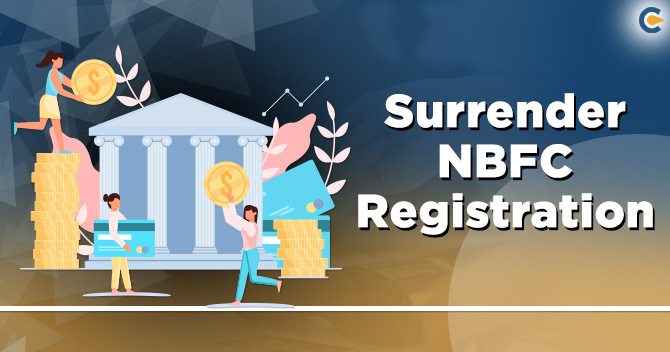 At end-March 2017, there were 11,522 NBFCs registered with the Reserve Bank, of which 178 were NBFCs-D, and 220 were NBFCs-ND-SI. The number of NBFCs has been declining over time with cancellations of registrations exceeding new registrations on account of voluntary surrender NBFC Registration due to non-compliance with the revised criteria of the net-owned fund.

Despite this, there has been a double-digit growth in credit extended by NBFCs, which is depicted by the Consolidated Balance Sheet of NBFCs at the end of March each year. An NBFCs requires a Certificate of Registration in accordance with the rules and regulations specified under Section 45-1A, RBI Act, 1934.

What is a Net owned fund for NBFC

It is important that the purpose of the term “net owned fund” as per clause 7(I) of the section 45-IA, means–

2. The book value of the debentures, bonds, outstanding loans and advances (including hire purchase & lease finance) made to, and deposits with-

When to Surrender NBFC registration

The company can surrender NBFC registration in case of the following factors taken place. As per the section 45-IA (6), the RBI may cancel the registration issued to an NBFC once surrender if:

NBFCs registered under other Regulators

There is a certain class of NBFCs primarily regulated by other regulators that are exempted from the requirement of NBFC registration under Section 45-IA of the RBI Act, 1934. The regulator and kind of NBFIs they deal with are as follows:

Securities and Exchange Board of India

Read our article:Procedure for Appeal against Cancellation of NBFC Registration by RBI

Effects on NBFCs that surrender NBFC Registration to RBI is briefly explained as below:

With surrendering the certificates, the companies cannot be able to transact the business of a non-banking financial institution. The RBI grants the Certificate of registration. These NBFCs have surrender NBFC Registration granted to them by the RBI will cease to carry on further business. The NBFC decided to surrender NBFC registration as ‘non- banking finance company’ cannot accepts public deposits to the RBI.

In the exercise of powers conferred to it under Section 45-IA (6) of the Reserve Bank of India Act, 1934, the RBI will cancel their Certificate of Registration of those who surrender its registration for a non-banking finance company to banking regulator RBI. The companies must not transact the business of a Non-Banking Financial Institution, as defined in clause (a) of Section 45-I of the RBI Act, 1934. Now, the NBFCs can’t take part in the business activities specified for non-banking financial institutions.

Any form of entity can enter into the business of money lending, but it is essential to get registered under the respective legislation. The Apex courts have in KalojiTalusappaGangavathi vs. Khyanagouda and Ors (AIR1970SC1420), observed that in order to curb malpractices of the moneylender and protect unwary debtors, the Legislature must impose such stringent restrictions by requiring such person to obtain a license, maintain and furnish accounts and carry out other obligations. Time and again, the courts have dismissed the recovery suit filed by unregistered money lenders holding money lending contracts and transactions void in the absence of a money lending license.

India’s banking sector has been grappling with an unprecedented liquidity crisis after the major scam was unearthed last year. The contagion effect later spread to the other established, forcing the Union government and Reserve Bank of India to announce special measures to support the NBFCs and Housing Finance Companies.

How Nidhi Companies are Differ...

Nidhi Company is a company that aims to start a company with less capital whereas NBFC company requires huge capita...