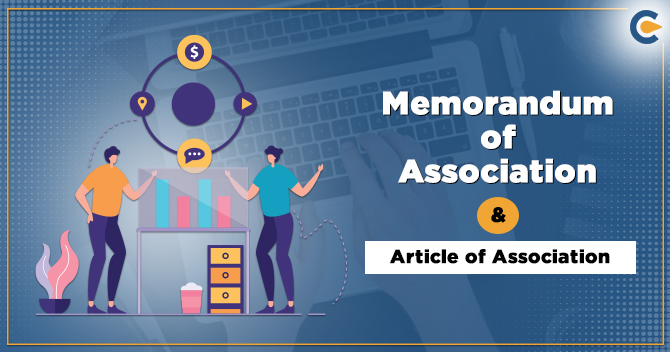 Converting a business into a legal entity is probably the most important phase for any organization. Task carried out by the company are regulated through statutory documents that outlines do’s and don’ts for it.

Memorandum of Association (MOA) and Articles of Association (AOA), are the commonly known company charter, specifies the scope of operations of the organization and its internal management. Drafting of these documents requires a holistic and professional approach. MOA and AOA is the basic legal documents required for the constitution of the organization. They cannot be overlooked as they are required to lay out the foundation of the company. Let’s dive into the paradigm of MOA and AOA individually which an essential component after getting the company registration done.

Brief on Memorandum of Association

The Companies Act, 2013[1] has outlined the applicability of a memorandum in following the clauses. Those are as follows:-

Keep in mind that name selection cannot be done on a random basis. They are a few things you should keep in mind while picking up the right name for the company. Criteria’s are given below:-

This clause encloses the detail about the address of the premises where the registered office is situated. If in case, the company decided to alter its principal place of business then the same should be amended in the said clause.

The clause demonstrates the objectives behind the formation of the company. This radically remains unchanged. Therefore, the applicant must take extra caution while drafting such a clause. Furthermore, the organization cannot pursue any business operations that are beyond the scope of the object clause of MOA. Such activities are regarded as “UItra Virus” and cannot be sanctioned by the members of the company.

This clause shows the member’s liability in terms of share possession. The clause cannot be drafted in case of unlimited liabilities.

The clause specifics the threshold limit of the capital that a company can raise. It also defines the limit for the distribution of shares. The company has to operate within the limit of the said clause. Any failure in this context will attract heftier penalties. Any special privileges or rights should be clearly mentioned in the object clause.

Subscription is all about the names, addresses, and info of the first subscribers. A privately-held entity requires a minimum of 2 members. Meanwhile in the case of Public Limited Company, this limit is stretch out to seven. It is compulsory for such subscribers to acquire a minimum of one share.

Brief on Articles of Association

Articles of association enclose the internal working of the companies along with the roles, responsibilities, and briefing regarding the management. It consolidates the by-laws as well as rules and regulations that outline the limitations of the company’s activities. The content drafted in AOA typically remains in sync with the Companies Act and MoA.

Regarding the Company’s Shares

Roles and Responsibilities of the Directors Along With Their Termination Norms

Article of association must clearly exhibits the Directors powers, appointment, and duties. Apart from that, it must include the Borrowing rights of BODs and the provisions to their termination norms as well.

Article of association must contain detail regarding meeting which includes arrangement of meetings, releasing of notification, and maintaining minutes. It also encloses provisions for voting rights and proxy that includes quorum. Furthermore, it also contains the rules for the remuneration and appointment of auditors.

Rules for Winding up of the Company

It is feasible to make amendments in the articles if that ensures any sort of benefit to the organization. However, that should not contradict any provisions which hamper the contracts with third-party entities. A special resolution is required for passing such amendments.

The concerned members should file a copy of the same with the Registrar, within thirty days of its passing. It’s important to note down that in no circumstances such alteration should not crank up the liabilities of its active members.

Key Differences between MOA and AOA

MOM and AOA is the most important document that actually decides the fate of the business in the upcoming years. It helps the company to make an informed decision, particularly in the case of appointment of a director, conducting a board meeting, and many more. It even outlines a responsive protocol for the company to get rid of the unorthodox situation.

Rather than looking into other sources, the company can refer to these documents and respond accordingly to avert conflicts of any contradiction. With such legal documents at disposal, the company can easily streamline its legal framework in accordance with the prevailing Act and regulations.

Read our article:Resolutions Passed at an Adjourned Meeting – A Complete Overview

Issue of Bonus Shares under Co...

Bonus Shares are given to shareholders as some additional shares, based upon the number of shares the shareholders...