Resolutions Passed at an Adjourned Meeting – A Complete Overview 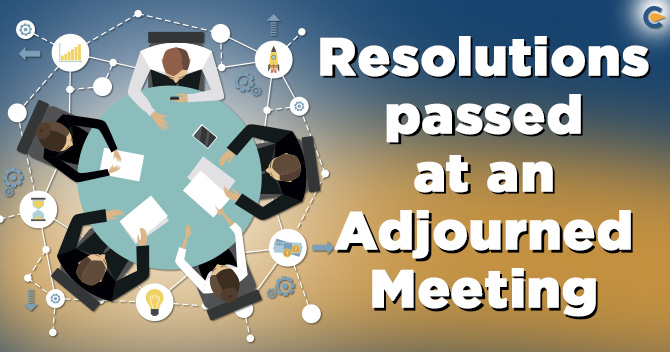 There are still many people out there who seek a brief explanation in the context of Resolutions passed at an adjourned meeting. If you are one of them, then the following sections will get you covered.

Example to understand the concept

Let’s have a look at the example to understand the concept of this provision i: e Resolutions passed at adjourned meeting.

The annual meeting of ‘x’ company was due to be held on 23 March 2019. But due to the surging demand of quorum, the meeting was adjourned to a next date i.e., 1 April 2019, and the two proposed resolutions were approved on that date. Now according to the Companies Act 2013[1], section 116, these resolutions cannot be tagged as the unapproved entities. Instead, they will be deemed as passed resolution, which was approved on the original date of the meeting. i.e., 1 April 2019, not earlier.

Hopefully, the concept of Resolutions passed at an adjourned meeting is now clear to you. If you are running a company after successful company registration, then you may have come across hundreds of board meetings in the past where important proposals turn into action under the guidance members and directors. Under those circumstances, a specific set of guidelines and procedures must be followed to ensure 100% compliance with the company law.

Any resolutions that were passed in the board meeting must be recorded appropriately. In addition to that, directors, in particular, have to address specific matters to companies House. If you are the shareholder and sole Director of your enterprise, you still need to organize meetings in some cases. Yes, you might find yourself alone at the meeting. It seems eccentric, but it is merely a corporate compliance regulation that needs to follow without exception.

Analysis of the Example

In this testing time, when the world is looking to escape from the COVID 19 pandemic, organizations across India finding it hard to conduct crucial meetings despite unprecedented internet speed and vast network coverage. In this context of the virtual meetings, although section 360A Companies Act 2006 supports remote participation, in the past, commentators deny the authentication of such meetings and tagged them invalid.

However, our projection differs from this situation. We strongly believe that in this testing time, the court might take measures in regards to the board meetings and may revise provision 6. This will probably solve the issue of the companies who are failing to organize quorum at this point in time.

If electronic means become a suitable platform for a quorum, then it will easy for the shareholders to interact with fellow members in a quick way. Although online interaction might not feel intuitive in the first place, for the time being, it is the best alternative to the physical gathering.  The technology should be versatile enough to run on any given platforms shareholders may use (such as computers, tablets, or phones). In such cases, the meeting notice should explain to every shareholder and guide them on how to attend, speak, and vote at the meeting. Also, a briefing is also essential in regard to software download and troubleshooting the normal error.

What is the General Meeting in the context of a limited company?

Any formal meeting that seeks the presence of shareholders is known as a General meeting. The direction of these meetings is controlled by the Companies Act 2006, shareholders’ agreement, and the articles of association.

Typically, the general meetings are organized to discuss crucial company matters with the shareholder. Here are some typical issues that bound to be addressed in AGM.

Providing notice in a newspaper for a general meeting

In some situations, the company members may render their approval to notice shorter than the legal minimum. Any decision at a general meeting that seeks the approval of shareholders requires ‘passing a resolution.’ These decisions are part of the legal framework that cannot be overlooked by the casual approach.

To authenticate the existence of the meeting, one must maintain the minutes in which all the proceedings recorded. The minutes usually contain the essential info, such as the detail of the members attending the meeting, and the list of decisions made.

What is a Limited Company Board Meeting?

Board meetings typically took place when directors need to make some vital decisions, scrutinize financial status, or present some crucial proposals to the shareholders.

First Board Meeting of directors

The nature of meetings serves the following purposes.

Director is the one who is responsible for documenting the proceedings of board meetings by taking minutes.

Minute is nothing but substantial evidence that authenticates everything that happened in the board meeting. It is a record of the actions that were taken at the minutes of meeting, including voting, decision making, and even disagreement of the members on a particular resolution. In short, Minutes is an extremely crucial document that contains the following information.

Limited companies are bound to keep the copies of all minutes in an immaculate condition at their registered office for the time span of 10 years.

What are the resolutions?

A resolution is a strategic business decision that comes under a legal framework and is made by the Director or shareholders of the limited company. Whenever a proposed resolution gets more than 50% of the member’s votes, it’s deemed to be a “passed” resolution. Shareholders got all the authority at their disposal to pass any sort of judgment on a given day. The collective decision of directors simply refers to as ‘resolution.’ These decisions are bound to be made at AGM or in writing.

What are the types of resolutions?

The limited company shareholders typically encounter three types of resolutions, such as:

Whenever the vote count of the members exceeds the 50% mark, the ordinary resolution shall be deemed as passed. These types of resolutions are quite potent to deal with day to day matters such as:

Director is one who leads from the front and exercises power granted by the shareholders to control the day to day operation of the company. Director’s right, roles & responsibilities are duly mentioned in the shareholder agreement and articles of association.

What is a special resolution?

Detailed matters are as follows:-

The Companies Act 2006 stipulates the decision classification requiring a special resolution. Where the resolution type not specified, shareholders might approve ordinary resolution with majority of over 50% of the votes.

How to pass a special resolution?

To approve the special resolution, the company must intimate its shareholders via 14 days’ notice. Remember, the notice should clarify the purpose of the meeting and its intention. If the general meeting comes into the action, voting will be done by a show of hands or utilizing a poll.

On the contrary, these decisions could be approved via written resolution. If 75% of the shareholders cast their vote in favor of a proposed resolution, the decision shall be deemed as legal as per Companies Act 2006.

The delivery of the special resolution must be done within 15 days of being passed via post to companies’ house. The copy of the same ought to be given to all relevant members and auditors. Moreover, a company also needs to possess one of the copies of resolutions and keep at its registered office address for at least ten years.

Resolutions are the proposal that needs to be addressed in the board meeting and must be passed under the command of the shareholders and Director. Coming to the topic, Resolutions passed at an adjourned meeting simply means that once the decision is taken at the meeting, which eventually ends up adjourned, shall be deemed as passed. It worth noting that this provision is outlined in section 116 of Company Act 2013. If you still have some room for complaint about this very topic i:e Resolutions passed at an adjourned meeting, please let us know by dropping your precious insights in the comment below.

Read our article: What is Quorum For Board Meeting in Regards to Companies Act, 2013?

The Director of the company may at any time call a Board meeting. On the requisition of the Director, any person au...

Demand for Poll under Companie...

In consonance with Legislative experiences on Demand for Poll, Clause 109 pursues to deliver on a declaration of re...