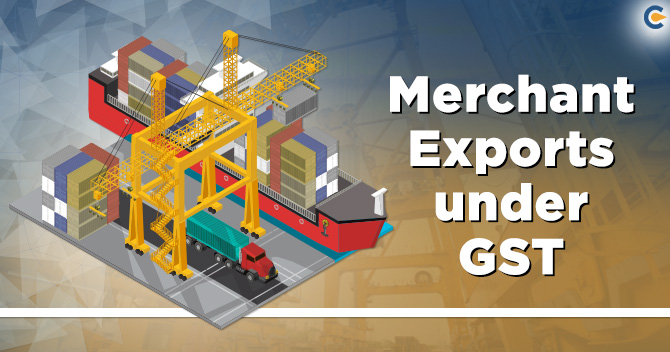 Few manufacturer exporters purchase goods from another manufacturer because of the less capacity of production, in order to match pace with the export order requirement of the foreign customers. They are known as manufacturer merchant exporter.

The procedures concerning merchant exports under GST have become simplified due to favorable government measures. Under goods and service tax, as per provisions of section2- (108) of the CGST Act[1], a taxable supply signifies the supply of goods or services or even both levied to tax. Furthermore, as per the provisions of Section 7- subsection 5 of the IGST Act, when a supplier has its roots in India, and the place of supply is outside the geographical regions of India, supply would get prescribed as inter-state supply.

Since the merchant exporter exists in India and goes on for supplying to a place outside Indian borders, merchant exports are chargeable to GST. Provisions related to both the sections confirm this changeability. Therefore, it is mandatory for merchant exporters to get GST registration.

The government of India has diminished the GST rate to 0.1% in order to grant special relief to the merchant exporters for buying goods from suppliers operating in a domestic region.

Besides this, if due to any reason the merchant exporter fails in exporting the goods in the time limit of 90 days from the issue date of tax invoice, then the registered supplier can’t avail of the benefits associated with the concessional tax rate.

Read our article:Changes in Budget 2020 in GST

Procedure for Merchant Exports under GST

The procedure that would get followed for merchant exports under the GST regime has got clarified. Concerning this, there is an availability of two alternatives-

Scenarios Concerning the Refund Process in Which Merchant Exporter gets involved

A supplier is a person that supplies goods to the merchant exporter; GST is chargeable at 0.1% in this matter. Also, here the merchant exporter takes steps for exporting the goods without tax payment. As prescribed in the section54(3) of the CGST Act, the merchant exporter can move ahead for claiming a refund with respect to the unutilized input tax credit at the tax period end in a matter of zero-rated goods or those goods that encompasses inverted tax structure.

The merchant exporter can’t avail of the concessional tax rate on inputs in this matter as he opts to make payment of tax (IGST) for exporting goods. Thus, the supplier would follow the standard tax regime, where input tax credit would get used for output tax payment, and the balance liability would get paid in the form of cash. Merchant exporters can proceed ahead for claiming a refund of unutilized input tax credit and IGST paid against zero-rated supplies.

Read our article: A Guide on GST Benefits for Small Businesses & Start-ups

GST or Good and Service Tax are a consumption-based tax levied on the supply of goods and services. Moreover, GST i...

An Outlook on Effect of VAT Re...

Four years of GST implementation are to be completed. Initially, it was expected that the industry would have an es...