Learn Everything about FDI Compliances under FEMA 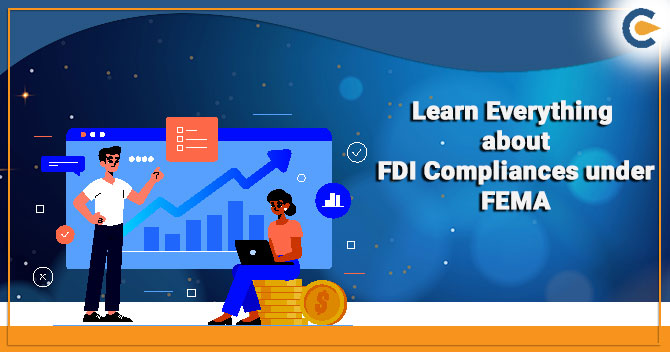 For a nation where capital is not readily accessible, FDI has been an imperative source of funds for organizations. Under Foreign Direct Investment, overseas capital, either by an organization or a person, is invested in the Indian company. This article will focus on various FDI Compliances that come under FEMA.

In our country, FDI policy is governed under the Foreign Exchange Management Act, 1999, controlled by the Reserve Bank of India. As per the OECD, an investment threshold of 10% or more from foreign territory is considered as FDI.

FEMA has been a pivotal source of growth for various sectors in India. The goal of this apex institution is to facilitate external trade, balance payments, advocate systematic development, & effectively manage the foreign exchange market in India.

Listicles of FDI compliances under FEMA

Annual return for Foreign Liabilities & asset (aka FLA Return) is required to be furnished compulsorily by all Indian-based entities which have received overseas investment or made the same in any of the preceding years, including the current year.

If the Indian firm is free from any outstanding investment w.r.t overseas investment at the end of the reporting year, the company is not required to submit an FLA return.

Likewise, if the Indian firm has not raised any FDI or ODI in the current year, but the firm possesses outstanding FDI and/or ODI, then that firm is required to furnish every year by 15 July every year.

Annual return for Foreign Liabilities & assets is one of the essential FDI compliances that every concerned entity and individual should follow.

Read our article:Analysis on Foreign Liabilities and Assets: (FLA Return) under FEMA

An Indian-based company, a local national which has made an ODI must furnish an Annual Performance Report (APR) in Form ODI Part II before AD bank w.r.t each joint venture, Wholly owned subsidiaries (aka WOS) operating outside India on or before 31 December every year.

Borrowers must share all ECB transactions to the Reserve Bank of India[1] on a monthly basis via an AD category- I Bank in the Form of ‘ECB 2 Return’.

Under the head single master form, FC-TRS, FC-GPR, CN, LLP-I, LLP-II, DRR, ESOP, DI, InVi are to be filed & submitted. The RBI on 1 September 2018, rolled out a user manual by the name “SMF Manual” to clearly establish the procedure regarding the filing of a single master form (aka “SMF”), which is rolled out on 7 June 2018 to integrate the prevailing reporting norms to overseas investment in India.

An Indian firm that received funds from a foreign destination for issues of shares or other securities covered under the FDI Scheme must report the details of the amount to the Regional office of RBI via its AD Category I bank within a month from the date of issuance of shares. The advance reporting form is an important part of the FDI compliances that seek due consideration.

Form FC-GPR refers to a form issued by the Reserve Bank under Foreign Exchange Management Act, 1999. When a firm receives the overseas investment and then allots shares to the foreign investor against the same investment, then the company is obligated to file detail of same with the Reserve Bank within 30 days via Form FC-GPR (Foreign Currency- Gross Provisional Return).

The term FC-TRS stands for Foreign Currency Transfer. It is a form for the Indian shareholder residing outside India or vice versa primarily used during the transaction of shares. Such a form, along with the Form FC-GPR, will be submitted before its authorized dealer bank. Further, the same bank will forward the Form to the Reserve Bank of India.

An Overview on FEMA Guidelines & Features

Most significantly, FEMA acknowledged all forex-based crimes as civil offenses, whereas FERA considered them as criminal offenses. Furthermore, there were other essential guidelines such as:-

FDI is also a key performance indicator of the country’s financial growth. After the liberalization, the Indian economy has thrived significantly, and FDI also plays a major in that. After being enacted in the year 2000, Foreign Exchange Management Act, 1999 (FEMA) has constantly been striving to increase the influx of such investment through systematic management of the foreign exchange market. Entities that generate foreign investment through the course of their business operations have to comply with FDI compliances and ensure fair practice in regards to foreign exchange.

Read our article:A Complete Overview on NBFC Compliance under FEMA

India rejoices a vital presence in the worldwide pharmaceuticals sector with a 20% share of generic drugs in suppli...

A Complete Briefing on Compoun...

With the array of laws and ever-evolving corporate milieu, the individual often ends up violating the various provi...