Learn about the Landmark judgements on Patent in India 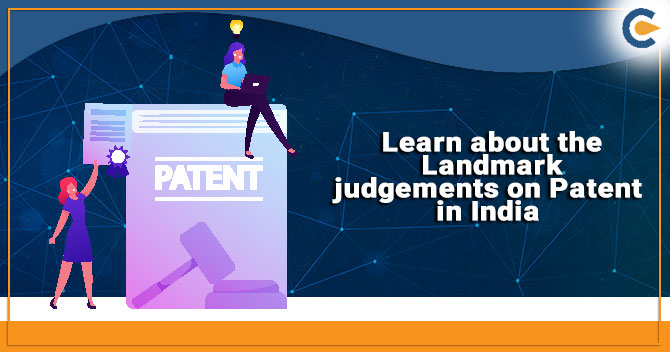 Patent protection is undoubtedly the foremost priority for any organisation because it can keep them ahead of rivals and reaps stable income for years to come. But somehow, some patents stumble upon unexpected litigations that costconsiderable time and money for companies. In this article, we have curated a list of Landmark judgement on the patent that not only created the buzz in the legal domain but also leave a lasting impact on the constitutional framework of the country.

Two pharmaceutical giants, viz OSI Pharmaceuticals & F. Hoffmann-La Roche Ltd., have filed the petition for a permanent injunction of the drug due to patent violation, rendition of damages, accounts, and delivery against Cipla Ltd. Mumbai.

Read our article:Landmark Judgments on IPR Law in India

Novartis AG vs Union of India

Yet another Landmark judgement of the patent in India created a lot of buzz in the drug manufacturing domain. This time Swiss Drug manufacturer Novartis faces rejection from the patent authority in the light of ‘unconstitutional’ patent law practices.

The Swiss giant seeks a patent for its cancer drug, Glivec, but the government revoked their appeal on the ground of the following facts:

Consequently, the Swiss manufacturer decided to sue the constitutionality of section 3(d) in the High Court, which was rejected in due consideration of the above grounds.

The case of Bajaj vs. TVS Motor talks about the disagreement related to the unauthorized patent’s application of the DTSi (Digital Twin Spark Ignition). The case is vital on the grounds of the parties’ financial stakes and application of the pith & marrow doctrine. This case is unique as it takes Doctrine of Equivalent into account. Above all, the principles available in finalizing the decision are also crucial.

In a recent judgement, the Bombay High Court took validity of pre-grant opposition into account and announced that a new form of a prevailing substance could not come under the patent’s regime unless its claims surpass prior art to ensure the different or enhancing effect.

This conflict revolves around the substance called clopidogrelbesylate, a salt derived from clopidogrel, which is already patented in the United States.

After prolonged deliberations, Bombay High Court opined that the Golcem’s erstwhile actions to restrain the opposition could act as grounds for litigation. Further, the Court cited that the alleged misrepresentation by the patent controller could solidify the case.Hence, the Court decided to hold the order and directed the authority to reconsider the matter.

The Delhi High Court granted temporary prohibition on the marketing and manufacturing of Maharaja Appliances’ electric kettle Model No EK 172 due to infringement of Strix’s patent (IN 1,92,511, US 6,080,968). The decisions were based on the following observations made by the Court on why the Indian manufacturer failed to discharge its burden of raising a ‘creditable challenge’ to Strix’s patent validity.

The defendant failed to present some acceptable scientific material, supported by the expert’s explanation that the patent is prima facie susceptible to cancellation.The burden of proof was greater on the defendant as there was no history of Strix’s patent being challenged in the Court.

Yet another Landmark judgement that has resonated strongly in the legal domain for years. Instead of filing a petition for infringement, Bayer Corporation filed a writ appeal in the Delhi High court requesting an injunction on Cipla’s marketing approval application in light of the violation caused by their version of the drug, viz SORANIB.

This appeal was one of its kind because it links drug approval to patent infringement in India.

In response, The Delhi High Court refused to stamp their approval on such appeal and eventually imposed a cost of Rs 6,75,000 on the plaintiff to prevent future occurrence of such actions.

Securing the patent in India is somewhat challenging, considering leverage available within ourlegal framework. The Landmark judgements above have made it evident that clarity on the applicable law is imperative for the plaintiff before filing petition against the the defaulter for patent protection.

Read our article:List of Important Judgments under Trademark that You Must Know!

Patents, among other intellectual property rights, are one that takes a relatively long time to secure. The first q...