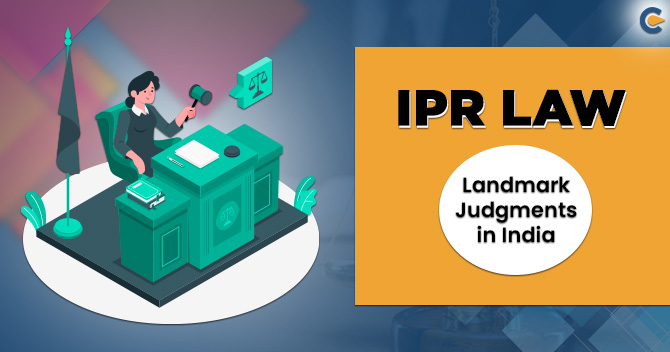 The meaning of Intellectual Property can be traced to the ancient usage of stamps on bricks by the Roman brick-makers for the purpose of identification, and even before to the time when the leaders of the ancient Greek city of Sybaris approved a monopoly for one year on cooking an enjoyable dish to the creator. Clearly, many things have changed since then with the improvement of technology, science, and global business, and with the coming up of Landmark Judgements on IPR Law also changed the whole IPR Law nowadays.

Intellectual Property is the product of intellect of humans, and certain exclusive rights are granted on it that allows its owner to benefit from the profits of such an intellectual endeavour by creating a monopoly over. Many Landmark Judgements on IPR Law in India have been decided by the Officers who have helped the people till today. In this article, we will discuss the complete overview of the different Landmark Judgements on IPR Law in India.

What are the different types of Intellectual Property Rights Laws recognized in India?

The different types of Intellectual Property Rights Laws recognized in India are as follows:

What are the Landmark Judgements on IPR Law in India?

The different landmark Judgements on IPR Law in India are as follows:

In this case of the IPR Law is related to a Dispute over Patent for the Usage of a Twin-Spark Plug Engine Technology. The Supreme Court (SC) of India, in this one of the Landmark Judgments on IPR Law in India, has directed all the Indian courts for the speedy trial and disposal of Intellectual Property (IP) related case laws in the courts of India.

In this case, a 2-year-old dispute which involved two big companies, which were locked in a Patent dispute over the usage of twin-spark-plug engine technology. The Supreme Court (SC) of India observed that the case laws relating to the matters of Trademarks, Patents, and Copyrights that are pending for several years and litigations are mainly fought between the parties about the temporary injunction.

The Supreme Court has directed that the hearing in the matters of Intellectual Property in India should be proceeded on a day to day basis, and the final judgment related to a case should be given generally within 4 months from the date on which the suit was filed. The Supreme Court (SC) of India further directed all the tribunals and courts in the territory of the country to faithfully and punctually carry out the orders, as mentioned above.

This is one of the first Landmark Judgements on IPR Law in India that is related to the protection of Intellectual Property Rights on the Internet. The Delhi High Court (HC), in this case, that is known till date as one of the Landmark Judgments on IPR Law related to cyber squatting held that the domain name of a product serves the same function as of a Trademark and hence, a domain name is entitled to equal protection.

The Delhi High Court also observed in this case that the disclaimer used by the defendants was not sufficient because the Internet nature is such that the use of a similar or identical domain name cannot be remedied by a disclaimer, and that also it did not matter that the domain name ‘yahoo’ is a dictionary word. The name ‘Yahoo’ had acquired distinctiveness and uniqueness when it was associated with the plaintiff. The Bombay High Court (HC), in the case of Rediff Communication vs. Cyber booth & Anr [2000 PTC 209], also observed that the importance and value of a domain name are as a corporate advantage to a company.

In the case of Bayer Corporation vs. Union of India, in the place of filing an Infringement suit, an inventive writ petition can be filed in the Delhi High Court (HC) desiring that since the applications of Cipla “SORANIB” allegedly infringed the plaintiff’s Patent, Cipla’s approval of marketing application under the Drugs Act should not be entertained or processed. It was for the first time that an attempt was made to link the approval of a drug to Patent Infringement in India. However, the Delhi High Court (HC), disagreeing with the injunction, levied a substantial cost of Rs. 6.75 Lakh to prevent any such future attempts.

Bayer Corporationdepended on the argument that a combined reading of Section 2 of the Drugs and Cosmetic Act, with Section 48 of the Indian Patent Act, 1970 establishes a Mechanism Patent Linkage under which no approval from the market for a drug can be granted if there is a Patent existing over that same drug. The Bayer Corporation also claimed that CIPLA’s “SORANIB” is a “Spurious Drug” as well-defined under the Drugs Act, 1940, for which market approval cannot be approved.

The Hon’ble Delhi High Court (HC) of India held that there is no such Drug- Patent Linkage mechanism in the territory of India as the objectives of both the Acts are different. Under both the Acts, the authority to determine the Patent standards, is under the exclusive domain of the Controller of Patent under the Patent Act, 1970.

Furthermore, the Patent linkage will have an objectionable effect on the Policy of Public Health of India. The Delhi High Court further held that the market approval of any drug does not amount to Patent Infringement. Therefore, the Infringement of Patent cannot be presumed; it is required to be established in the court of law. Such an adjudication is beyond the limits and jurisdiction of the Drug Authorities.

On the issue of Cipla’s “SORANIB” being a spurious drug, the Delhi High Court held that Cipla’s “SORANIB” drug does not come under the category of spurious goods as there is no any element of Passing-Off like imitation or deception present in this drug of CIPLA.

Clinique Laboratories LLC and Another vs. Gufic Limited and Anr [MANU/DE/0797/2009]

Under the provisions of Section 124(1) (ii) of the Trademarks Act, 1999, any suit is liable to be stayed till the petition of Cancelation of Trademark is finally decided by the competent authority of Trademarks. However, under the provisions of Section 124(5) of the Trademarks Act, 1999, the court has the authority to pass an interlocutory order, including the orders of granting interim injunction, appointment of receiver, keeping of account, or attachment of any property.

In the case, the court held that an Infringement suit of a registered Trademark is maintainable against another registered owner of an identical or similar trademark. This case is considered to be one of the Landmark Judgements on IPR Law in India.

It was further held that in this case that in such an Infringement suit, while staying the proceedings of the suit and there is any decision pending the decision on Rectification or Cancellation petition, the court is allowed to pass an interim injunction for restraining the usage of the registered Trademark by the defendant, considering the condition that the court is convinced prima facie of the invalidity of the registration of Trademark of the defendant. In this case, an interim injunction was granted in the favour of the plaintiff till the disposal of the petition of Cancellation by the competent authority.

This is one of the Landmark Judgements on IPR Law in India. The case is related to the rejection of a Patent for a Drug that was not ‘inventive’ or had any superior’efficacy.’ The Company Novartis filed a registration of Patent application for one of its drugs called as Gleevec by covering the drug under the word invention mentioned and provided underSection 3 of the Patent Act, 1970[1]. The Supreme Court (SC) of India rejected the application of Novartis after a period of 7 years-long battle. The reasons cited by the Supreme Court (SC) were:

This case became one of the Landmark Judgments on IPR Law in India because the SupremeCourt (SC) looked beyond the procedures and into the fact that the attempt of all such companies to ‘evergreen’ their respective Patents and make them unreachable at some nominal rates.

We at Corpbiz have experienced professionals to help you in the matters related to Intellectual Property Rights in India. Our professionals will assist you with the matter and will ensure the successful completion of your work. 5 Remarkable Benefits of the Patent Registration in India

What is the patent? How patent benefits the owner? There are some typical queries that hover over the mind of inven... 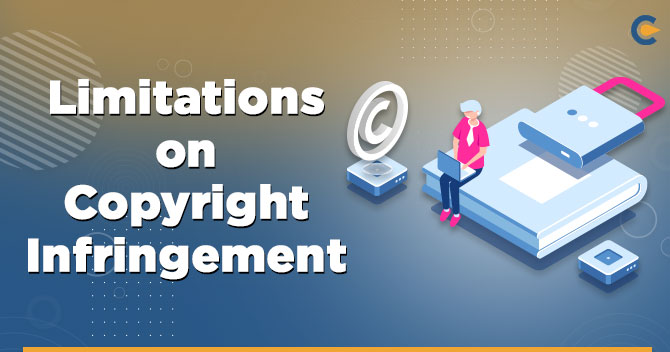 Limitations on Exclusive Rights and Exceptions to Copyright Infringement

The copyright laws have strong exceptions to copyright infringement that enable the fair use of material for other...