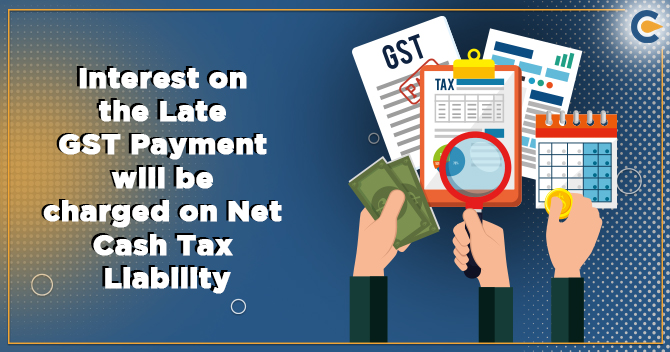 CBIC has rolled out some crucial directions on the interest on the late GST payment under the purview of the CGST Act, 2017 on 25/08/2020. The CGST Act has undergone several amendments this year. The government has put its best effort to assist the business owners pan India during this tough time. Given this, the government has been making a continuous amendment.

The recent amendment was done on account of interest charged on the late payment of GST. The following list exhibits the same.

However, the CBIC rolled out another update regarding the amendment which indicates that the interest for delayed payment of GST would be chargeable on net tax liabilities. The notification has been in an active state since 1st September 2020.

Section 100 of the Finance Act, 2019[1] inserted a new condition to Section 50 of the CGST Act. The condition clearly indicates about the imposition of the taxes on the tax return filed after the due date. To be precise, it will be imposed on the part of the tax paid by debiting the electronic cash ledger. However, there is an exception to that. In case the return has been submitted after the initiation of the proceedings as per Section 73 or 74 for a given period, interest will be levied on the gross tax liability.

Prior to the notification, the interest was supposed to be calculated on the total tax liability without adjusting the ITC, i.e. input tax credit accessible in the ledger for utilization. This results in increased cash out for the taxpayers. Presently, the GST portal is not equipped with features that allow auto-computation of interest. The obligation for calculating and declaring the interest is on the taxpayer itself.

Some taxpayers in the past had paid interest on the net liability rather than gross. Accordingly, the authorities rolled out updates in the past depending on the CBIC’s Chairman Direction. Up till now, Rs. 45,996 crore had been collected by the authority on account of interest imposed on late GST payment. In response to the notification, taxpayers decided to take legal assistance on the matter.

How to Deposit Late fees?

Late Fees for GST Return as per the GST Act

Interest is applied to the delayed payment of GST liability. Every individual has to pay the interest even after successful completion of GST registration in case if him /her:-

The following table manifests the interest rate which has to be paid in case of late filing of the GST return.

The Net GST liability can be measured by ITC from Gross GST Tax liabilities. Hence, the consideration of interest on gross tax obligations was raising the payment of businessmen. These variations can be pretty helpful for the individuals who are confronting a tough time due to this pandemic by reducing their payment obligation to a significant extend. Connect with CorpBiz for calculating interest on the late GST payment.

Read our article:Things you must know about GSTR-5 Filing: How to go about it?

This blog will notify the taxpayers who are waiting to file income tax return (ITR) for the Financial Year 2019-20...

An Comparison of Post-GST Impl...

As India has celebrated the 72nd Republic Day, it is also a preparation for another important milestone. Great hope...