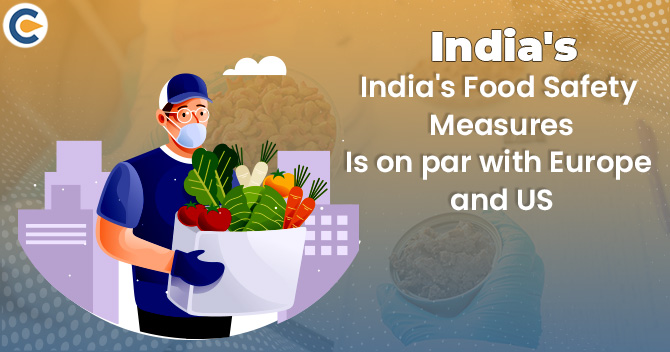 The apex regulator FSSAI operates under the ambit of the Food Safety and Standards Act 2006. It is vested with the obligation to underpin science-based standards for food items and regulate their entire supply chain with relevant Food safety measures. The Act aims at advocating food safety at the national level.  To serve such an objective, FSSAI must comply with an inclusive approach by using the insights of all stakeholders, that all prominent issues are thought out via a transparent consultative process and conflicting opinions reconciled in view of legit scientific evidence.

The decision of drafting food-related provisions was a landmark decision. These laws have increased the food safety that an end-user receives, and these laws have also boosted the industry’s growth[1].

Before the advent of the FSSAI, food safety has divided into different Acts in India; the repealed Acts were as follows:

After approving the FSS bill, these Acts were repealed, and all the food laws and provisions were accumulated into one individual Act, the Food Safety and Standards Act.

The European Food Safety Authority (EFSA) was established in 2002, owing to the decade of food safety loopholes that led to the complete reconstruction of the European Union and food safety system.

This brought ground-breaking changes in the European Food Safety Laws and Regulation. EFSA serves the role of the data collector and scientific advisory. It has standardized the food provisions to avert any confusion relating to the food safety regulations.

Under the FSS Act, 2006, and the prevailing FSS Regulation of 2011, food authority is accountable for drafting standards for food articles and food safety regulations and tracking their implementation in the nation.

Various food norms have been released, and many more are required to be drafted and enacted to streamline the system.

The process of standardization of food articles has developed over these years. The standards are primarily based on several key factors and scientific data for safeguarding the health of end-users. Many food norms have been based on the provisions cited under the Prevention of Food Adulteration Act.

However, there is an ensuing demand for examination of these norms, taking into accounts the following factors;

Lately, the food authority has invited suggestions from the stakeholders on account of the concerns mentioned above. U/S 16(3)(m), of the FSS Act, 2006, FSSAI is liable to advocate consistency with the applicable global standards.

This would ensure fair trade and the availability of hygienic and safe food to the end-users. The norms and other standards adopted by the Codex Alimentarius Commission are the global international standards and also serve as a reference point within the WTO’s framework. The member nations are liable to apply the national treatment clause; all overseas food items shall be given treatment equal to those applicable to the local manufacturers and the market.

Being an apex government institution, FSSAI plays an imminent role when it comes to food safety and hygiene. Up til...

Regulation of FSSAI on Vigilan...

Packaging of food is a necessary step for protecting the food while distribution and preventing the contamination o...