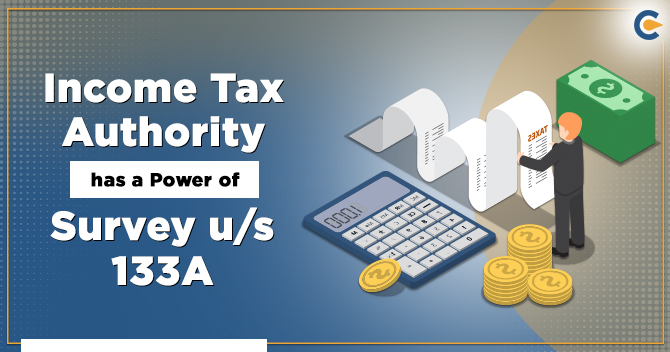 The Board in pursuance of the Taxation & Other Laws (Relaxation & Amendment of Certain Provisions) Act 2020 & in supersession of order under section 119 of Income-tax Act dated 18 Sept 2020 has issued directions for the “Income-tax Authority” for exercising the power of survey under section 133A of the Act.

The CBDT while exercising the powers under section 119 of the Act issued directions regarding the following:

Read our article:Guide on Section 2(15) of the Income Tax Act and its Impact – Get the Complete Outlook!

Any verification or survey under section 133A of Act done by the TDS charge will be conducted by its own officers.

Any survey conducted under section 133A of Act done by Central charge headed by the CCIT will be conducted after the approval of a collegium consisting of CCIT concerned.

TDS surveys done by the International Taxation Division will be approved by collegium of Pr.CCIT (IT&TP)/CCIT (IT and TP) as one member of the collegium and CCIT (TDS) or the Pr.CCIT of the region

Any action under section 133A of Act did by the National e-Assessment Centre or the National Faceless Appeal Center through the PCIT (Verification Unit) is concerned.

Any survey action under section 133A of Act is conducted by Exemption Charge and the same will be approved by the collegium consisting of Pr.CCIT (Exemption) as one member and DGlT (Inv.) as the other member.

Any verification by I&CI charge for enforcement of various compliances of Section 285BA of Act and related rules will be done only through the electronic means by the officers of I&CI charge.

Highlights of the Notification

It is reiterated that as per an amended section 133A of Act, the surveys can be conducted only by the officers of an Investigation Wing or TDS charge and any such action must be taken only as the last resort when all the other means of verification/obtaining details online/recovery are exhausted.

Voting by Electronic means ‘e-voting’, which is a term serving several different types of Voting, implementing...

How to Calculate Income Tax fo...

Salaried individual is an individual or the taxpayer that comes under the head of income from salary according...