Enlightening about the Impact of GST on the Hospitality Industry 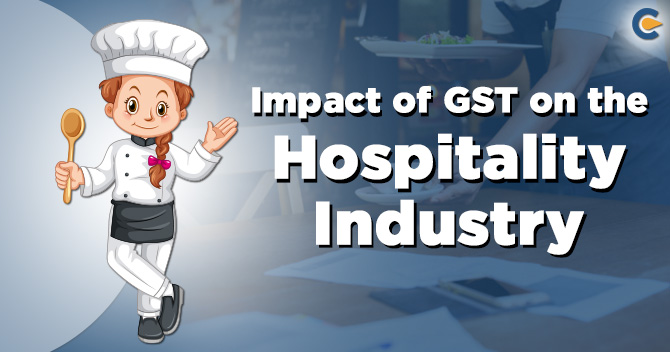 Most of the foreign corporate travelers and international sightseers are visiting India for business opportunities and exploring the sacredness and unfathomable beauty of tourist places in India. Thus, they are driving force behind the flourishing hotel industry in India.

Experts have put their point that GST implementation will boost the sector by pulling down the business transaction costs, reducing customer costs, and simplifying taxation process. However, there are some hurdles on the path as well.

Hospitality Industry Tax prior to Implementation of GST

Under the previous VAT regime, the hospitality sector was paying multiple taxes like service tax, luxury tax, and VAT. A room hotel with a tariff more than Rs 1000 used to come under service tax of 15%. On the tariff value, 40% abatement was allowed pulling down the service tax rate to 9%. The applicability of luxury tax and VAT (12-14.5%) would be on the head. In the same way, service tax for restaurants after abatement was 6%, including VAT.

Impact of GST on Hospitality Services

Under the reasonable GST regime for the hospitality industry, this sector is witnessing more demand as well as traction. As the final cost to the customer is declining, more international tourists are on the card for the hospitality industry. Eventually, it would perk up government revenue. The hospitality sector will be making the most out of standardized rates of tax. Furthermore, it would adequately utilize the ITC. This tax regime[1] ensures the unparalleled growth of the hospitality sector in the future course of time. There was a time when complementary foods were taxed distinctly under the value-added tax, but now it would get taxed under GST as a clustered service.

Applicability of GST rates for Room Tariff Based Hotels

Read our article:GST: Penalty, Offences and Appeals Under GST Act 2017

Merits of GST on the Hospitality Industry

Customers were unable to understand the right tax order in the previous regime. Furthermore, ordinary people were finding difficulties in differentiating between VAT and an entertainment tax. With GST as a unified tax system, customers would get a clear view of the tax structure and the tax that they are paying. They won’t get confused with the multiple charges on the bill, and all they would see is a single bill.

Have you ever faced the problem of waiting at the reception point of the hotel or roaming here and there due to the delay in the process of billing? Yes, you might have faced this problem, but after GST came into existence, it has simplified the things as there is only one tax to commute, and thereby, it has made the checking-out process easy. It’s another benefit that falls into the kitty of the hospitality industry. Removal of multiple taxes for a single bill and cascading effect of VAT would make the taxation process easy-breezy.

Due to the abolishment of various other taxes, there will be a reduction in processes followed, and thus, the process of taxation would get streamlined.

Claiming as well as availing input tax credit would be a matter of grace for the hospitality sector. At the time of paying the output, hotels will be able to take advantage by reducing the tax paid on input. Before the emergence of GST, tax paid on cleaning supplies along with tax paid on raw edibles couldn’t get adjusted in a complication-less manner against the outputs. However, the new GST regime will be free from all kinds of complications that existed in the previous taxation method.

Despite being getting registered its name in the records of the global hospitality industry, India needs to uplift its quality of services to match pace with the neighbouring counterparts. Neighbouring countries like Singapore and Japan are the tourist’s first choice due to their low tax rates. When it comes to the field of travel and hospitality, India is a big gun. However, due to its high tax rates, it is losing a good number of tourists.

GST has clarified under its guidelines the way through which every industry should fike their returns on time and maintains their accounts. However, businesses should try to become proficient on technological grounds.

The growth of the hospitality industry in India has drawn the attention of people all across the globe. However, still, there is a lot of scope for this sector to flourish at a national and international level. The hotel market is leading the hospitality industry from the front. The Indian government is improvising the things from scratch level so that positive outcomes would come for the hospitality sector and also keeping in mind that every business person associated with this industry must familiarize themselves thoroughly with GST new regimes and follow the same for the proper execution of government plans.

The methods of GST Registration for e-commerce operators, along with the forms needed by taxpayers who will deduct...

Goods and Service Tax on Direc...

Directors remuneration is payable for the services that the director offers. The supreme power of a company or a co...