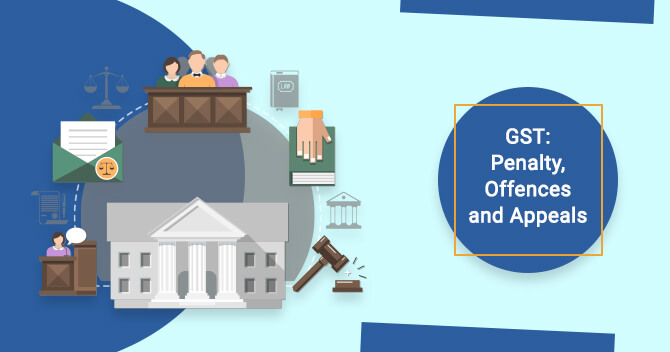 The Goods and Services Tax Act (GST) is introduced as a single tax in the year 2017 all over the nation. It has ensured the legal requirements of small and large scale businesses which are expressly specified in the Act. However, the non-compliances of the provisions have the penalties mentioned in the GST act itself. There are offences under section 122 to section 138 related to GST, and for same GST penalty is provided in the Act. In the subsequent paragraphs, we will discuss the GST penalty and offences related to it. And Further explanation regarding appeals contesting process to the appropriate authority.

Offences under the GST Act

Offences related to GST are given under section 122 of Chapter XIX of the GST Act, and if the following is done by the taxable person will be considered as an offender for the purpose of this Act. The following are covered as GST offences:

If the taxpayer is found guilty of the above mention offences under section 122, then,

Other Offences and GST Penalty

Any of the GST penalty cannot be imposed on any person in case of minor mistake or omission of documentation and also in case of procedural requirements which can be rectified under section 126[1], provided, that does not involve any fraudulent intention or gross negligence.

The minor breach of tax excludes GST penalty in the following circumstances:

Appeals made under the GST Act

The taxpayer can make the appeals against the order passed by the officer in charge related to GST penalty and offences imposed upon him. The first appeal can be made to the First Appellate Authority against the order made by adjudicating authority. The second appeal is made to Appellate Tribunal by the taxpayer. Further, if he is not satisfied, then he can go to the High Court. The final and last appeal can be made to the Supreme Court of India in case the taxpayer is dissatisfied by the decision of the subordinate courts.

The GST is a new act requires a detailed study about the provisions and what if one does not follow the provisions under this Act. The GST penalties and offences are expressly described under this Act. To avoid the GST penalty and long litigation process, one must require to share the issues and queries with team Corpbiz. We have the team of experts which provide taxpayer clarification regarding the procedures and help them in Online GST registration as well.

Invoice Registration Portal, i.e., IRP, is a GST-based platform that authenticates the legitimacy of invoices used...

All you need to know about the...

The 45th GST Council Meeting was conducted on September 17, 2021, and was presided over by Honourable Finance Minis...