How can one have the Right to Buy Pharmaceutical Drug? 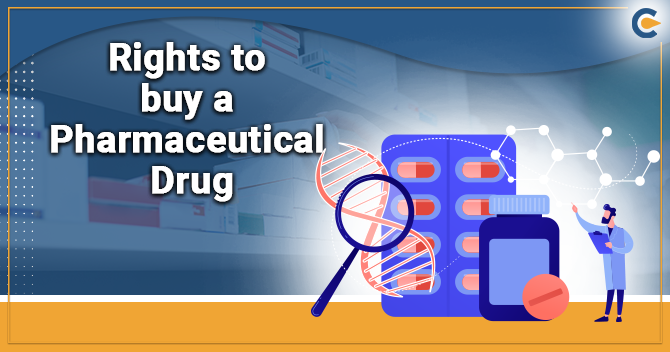 With an introduction of the product patent regime, a wide range of pharmaceutical drug/products can be patented in India. Before applying for patent registration, one must carefully take into consideration the criteria of patentability.

Once acquired, patent rights can be transferred through assignment or licensing to other persons or companies.  It has to be ensured whether the prospective drug/formulation (either manufactured or imported to India) qualifies as the drug since there are the different rules and procedures for drugs in the Indian market for using drugs.

Pharma industry is the most intense “knowledge-driven” industry. Pharmaceutical research is also very costly and unpreddictable in its nature. The outcome of the research can be in the form of a new, inventive, and useful product or process.

In this highly competitive market, pharmaceutical drug companies must protect their inventions from any unauthorized commercial use by acquiring patent rights over the invented product or process. Pharmaceutical patents in India can be further classified under following categories. The classification is based on the list of Pharma patents provided by the Indian patent office on its website.

These patents claim a drug compound by its chemical structure per se. These patent claims are usually referred to as Markush type claims. A Markush claim is a claim with multiple “functionally equivalent” chemical entities allowed in one or more parts of the drug compound. Drug compound patents provide the broadest possible protection to the company’s product since other companies are not allowed to prepare such a drug by any route of synthesis or produce/ sell any formulation comprising this drug before the expiry of said patent.

These patents claim a specific technology to prepare a formulation and/or quantity of its key ingredients. For example, following ayurvedic anti-retroviral composition for Acquired Immuno Deficiency Syndrome treatment was claimed in the Indian patent.

Drug synergy occurs when there are two or more drugs interact with each other to enhance one or more effects of those drugs. Patents can be obtained on new synergistic combinations of the drugs.

These type of patents are based on the techniques used to solve specific technology-related problems like stabilization, taste masking, increase in solubility, etc. A pharmaceutical formulation having a masked taste, the masking of which persists during the administration of the formulation, in particular in the form of a suspension in an aqueous vehicle, characterized in that it comprises at least of these following elements:-

Polymorphs are different physical forms or crystal structures of an already known compound. Polymorphs are usually prepared to reduce impurities or increase the stability of the compounds.

Biotechnology involves a use of living organisms or biological materials in the preparation of pharmaceutical products. Biotechnology patents cover a wide range of diagnostic, therapeutic, and immunological products. For example, human serum albumin-free Interferon solution containing an interferon-alpha, a non-ionic detergent, a buffer for adjusting pH 4.5-5.5, benzyl alcohol, and optionally an agent.

A process patent does not claim the product per se; rather, it only covers the new and inventive process to produce the particular product. For example, L-lactone of formula 3,6- dialkyl-5,6-dihydro-4-hydroxy-2h-pyran-2-one.

License for Export of Patented Pharmaceutical Drug under section 92A

This provision addresses the countries’ public health concerns having insufficient or no manufacturing capacity in the pharmaceutical sector to implement the TRIPS council’s decision on Para 6 of the Doha Declaration on TRIPS Agreement and Public Health.

Availability of Compulsory License as per Provision

Import and Registration of the Drugs

It is mandatary that no new drug (including Fixed-Dose Combination of two or more drugs) will be imported or manufactured for sale unless the authorised Licensing Authority approves it. The term ‘new drug’ is defined under the Rule 122E of the Patent Rules. It is also provided in the Rule 122E that a new drug will continue to be considered when any new drug exists for a period of 4 years from a date of its first approval.

The Licensing Authority is Central Drugs Standard Control Organization for obtaining drug license or for the approval of import and manufacturing of new drugs. Apart from the import and manufacturing of new drugs, any person who intends to import drugs into India, such a person has to obtain a Registration Certificate and Import License from the Licensing Authority. The regulatory compliances does not restrict to drugs and apply to manufacture sites based overseas.

The Pharmaceutical Drug is a large and successful business, being the third-largest in the world. Many of the companies sell out the generic drugs at lower prices. Generic medicines are those which function like drugs from large brands but at the lower costs. Hence, thorough due diligence is required to be undertaken by every company before entering into the Indian Pharmaceutical Industry.

Read our article:Everything you need to know about Significance of Drug Patent in India

Purchase of Drug Patents by th...

The pharmaceutical company in India spends a huge amount of their capital in researching for new drugs and variety...

Wholesale Drug License for the sale of drugs/medicine under Drugs and Cosmetics Rules in Form 20B & 21B is issu...