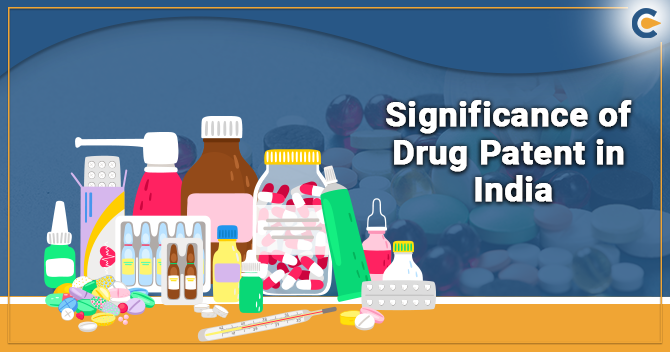 One of the prime beneficiaries of the rapid advancement of technology has been the pharmaceutical industry. Time again is regarded as an extremely knowledge-driven field, it needs years of experimentation and research to come up with one drug. Moreover, most of the researches in this sector are unpredictable, with many not leading to a conclusion. Therefore, it becomes vital for pharma companies to make the most out of whatsoever research results they get. So, how do the pharma companies make sure that they stay financially protected when conducted researches are both unpredictable and expensive? This is where the Significance of Drug Patent becomes vital for pharma companies in protecting their interests. Here we can look at why drug patents are essential for the Indian pharmaceutical sector.

Moreover, India is also a part of the General Agreement on Tariff and Trade. GATT has helped India by proving significance of drug patent to be more proficient. The major change came by the enactment of the Patents Act, 1970, which permitted pharmaceutical companies to patent their process of drug manufacturing.

The validity period of drug patent at that time was seven years. India became a part of the General Agreement on Tariff and Trade (GATT) in 1994, which led to several noteworthy changes in the Indian market, as the country had to comply with TRIPS and GATT laws.

After becoming part of GATT, pharmaceutical companies in India needed to meet the minimum required standard laid down by the Trade-Related Aspects of Intellectual Property Rights (TRIPs). As a part of this development, India introduced the method of product patents, which were valid for twenty years.

Read our article:Documents of Drug License: Things you must know

A patent is a legal document that permits the proprietor to protect their idea or invention from intellectual property theft. It is a form of Intellectual Property Right that forbids others from developing, using, selling or marketing a design with no consent from the owner. It is granted by the government of India and it helps in making sure that the proprietor has supreme rights over their idea or creation.

Though, a governing authority does several precise checks to make sure that the plan, process or product is inventive and unique before giving a patent. Significance of Drug patent is made solely for medicines or drugs, which forbids other corporations from manufacturing, selling or marketing a particular drug.

History of Drug Patents in India

After India agreed to the TRIPs Agreement, by way of an amendment to the Patent Act, it made intermediary arrangements that were possible in India. Another amendment was introduced in the year 2000, extending the duration of drug patent in India with introduction of obligatory licensing.

In third amendment of Patent Act, product patents were initiated, along with modification in the filing procedure and fee structure for Indian pharmaceutical companies.

Types of Drug patents available in India are as follows-

In this system, only the process of manufacturing a drug can get patented, and not the drug. Thus, other competitors could choose different methods for manufacturing the same drug that leads to a lot of copies and generic medications.

Under this system, the actual drug is patented, preventing others companies from manufacturing it. This makes sure that competitors cannot make the same drug, and therefore acquire a market share for a drug you specialized in.Since then, this system is followed in India.

Introducing the product patents helped in providing more power to Indian pharmaceutical companies. Before 2005, Multi-National Companies and American companies had a significant impact on the pharmaceutical sector and Indian healthcare sector.

However, later on, we have seen Indian pharmaceutical companies leading the market, as the market share of the Multi-National Companies reduced significantly after 2005. Besides, a lot of foreign companies decided to launch their subsidiary companies in India and trade medicines through them, as Research & Development was less expensive in India.

How Significance of Drug Patent have Helped Pharmaceutical Industries?

Before product drug patents became common in India, Indian pharma companies were having a tough time. Generic drug companies were not spending much on research. They sell their drugs on lower prices and then consolidate the market share. Such pharmaceutical companies were making things very difficult for other companies who were helping in making new drugs.

But timely patent law interventions helped pharmaceutical companies handle the situation efficiently. Though, the significance of drug patent helps the pharmaceutical companies in maintaining a good profit margin, they must not try to run a monopoly in the market. Hence, the patent law addition in Competition Act 2002[1], prevents a monopoly in any field. Therefore, significance of drug patent laws helps in balancing the protection of IP and competition. It also ensures welfare for both companies and the general public.

What is the Significance of Drug Patent in India?

Patents suggest a technical solution for modern-day technical issues. The system of patenting in India became what it is now, and the credit goes to the Patents Act, 1970. The Patents Act made it possible for people to process patents and file product.

In a competitive market, companies has to protect their inventions, designs, and drugs from illicit use if they are to stay prominent. The Indian patent system permits pharmaceutical companies to file different types of patents that protect them from getting their drugs and designs ripped off. The various patents helps in preserving drugs, compositions of drugs, synergistic combinations, and even methods used to develop medicines. Consequently, it serves as an all-round fool-proof system that prevents any sort of intellectual theft. The Indian patent legislation helps balance the interests of both pharma companies and the general public.

Now and then they also add a component that makes no changes in the product and files for another drug patent. Also, many pharmaceutical companies choose to buy out their competitors. They also seek to stall the latter’s research by filing fraudulent claims of infringement on these new drug patents. While these strategies are considered legal, they make medicines more expensive and should be checked.

Significance of Drug Patent is flexible enough to acknowledge for licensing, which makes cheaper outsourcing possible while also being strict enough to prevent illegal copying. It also promotes scientific research as institutions and companies can make profits by licensing their patents to larger pharmaceuticals companies. Therefore, in many ways, such patenting system is regarded as the backbone of the Indian pharmaceutical sector.

Read our article:A Detailed Outlook on the Registration Process to Obtain Drug License in India

How to Obtain Drug License in...

To ensure a healthy condition when you are sick, you need to consume medicines or drugs.  But how can you be so su...

How one can apply for Wholesal...

Licensing is mandatory to do business in Drugs & Cosmetics in India. The company/distributor/independent agent...