How GST in India Differs with GST in Other Countries 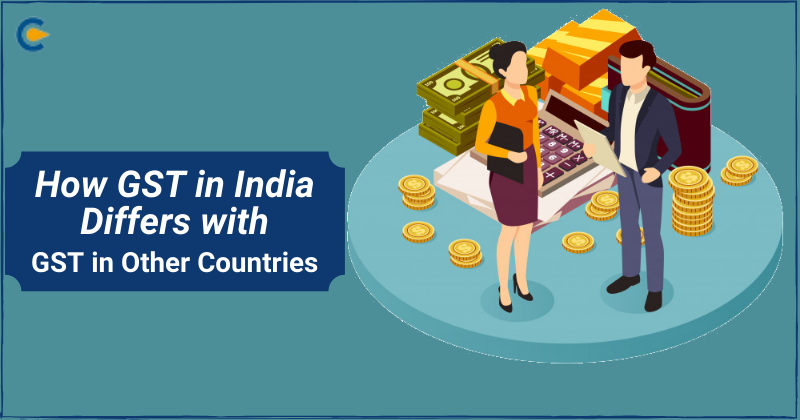 GST in India is always a hot topic to discuss and if we talk about its comparison with other countries it becomes hotter. Today in this article we will discuss the GST in India vs GST in other Countries. But, let just put some light on the history of the GST.

So, the concept of the GST is first introduced in France in 1950s by a French tax official. After that, many other countries adopted GST in the same way but some accepted it in VAT i.e. Value Added Tax form. Today, more than 160 nations including the European Union and Asian countries are practicing this form of taxation. Moreover, Countries like Sri Lanka, Singapore, and China also sharing the hand in the practice.

On a rough note, 90% of the world’s population live in countries with VAT or GST as the taxation system. The GST council[1] finalized the tax rates on 80-90% of the goods and services under the 4 slab structure keeping essential items of daily use in the lowest bracket of 5%. India, unfortunately, came into this system quite late.

Therefore, the table shows some of the tax rates around the world who have implemented GST or VAT.

Introduction of GST in India

The GST is a kind of sales tax levied on the consumption of goods or services. It has replaces around 16 tax levies- 7 central taxes like excise duty and service tax and 9 states tax like value-added tax and entertainment tax binding India as one market with one tax rate.

GST was a Game changer in the market and if we compare the efficiency gains under VAT with the GST then it has given the higher tax buoyancy and an improvement in government finance over the medium term.

“The single GST subsumed several taxes and levies which included: central excise duty, services tax, additional customs duty, surcharges, state-level value-added tax and Octroi. Other levies which were applicable to interstate transportation of goods have also been done away with in GST regime. GST is levied on all transactions such as sale, transfer, purchase, barter, lease, or import of goods and/or services”.

What is GST Registration in India?

GST Registration is applicable if the supply turnover of all Indian service providers, including all sorts of freelancers as well as traders and manufacturers crosses Rs.20 lakh, since 1st April 2017.

Why GST is implemented in India?

What is the Difference between GST in India vs GST in other Countries?

Read our article:Cancellation of GST Registration in India: Full guide

GST in India vs GST in other Countries- Tabular Format

Now, coming to the detailed explanation of the Countries,

GST in India vs GST in New Zealand

GST in New Zealand was the first to come into light in 1986 at a rate of 10%. However, the rates are changed twice in the year 1989 with 12.5% and 15% in 2010 to generate higher revenue while removing distortions in the tax structure.

Moreover, this change led to the adoption of GST at a single rate including food in the GST base at the full rate. Hence, such broad-based the tax net and also reduced both compliance and administrative costs. Presently, the country is getting the highest tax productive nations among the OECD countries.

GST in India vs GST in Canada

Talking about the Canada GST system, it was a multi-level VAT in 1991 on the supplies of goods and services purchased in the country. The GST includes almost all the products in it excluding certain essentials like groceries, residential rent, and medical service.

Furthermore, the bill once gets implemented then it will be led to new processing operations and techniques to verify the accuracy of the return submitted by small entrepreneurs. However, Canada imposes its own sales tax besides GST.

The GST rate in Canada is 5% on the supplies of goods and services and in some province, there is a harmonized sales tax at 15%.

GST in India vs GST in Singapore

The country introduced the GST bill in April 1994 at a tax rate of 3%. The intention was to make the public acceptance to the public and to minimize inflation. The government swore to the public not to raise the tax for the next 5 years that came in as an important decision in reviving consumer spending. With Effect from 2007, the GST rates have been increased to 7% that still very less compared to GST rates of India.

GST in India vs GST in Indonesia

Now, in Indonesia imports are usually subject to VAT and GST, but most of the exports are exempted from the list of it. The tax rate in Indonesia is 10% if the services are supplied outside the parameters of Indonesia, in some cases, the certain item is taxed at 20% with a cap of 35%.

Moving forward to the luxury items the tax rate is applicable to the import around 10% to 50%. Most of the items like gold, mining products, arts and entertainment, education, insurance, parking or public transport, labor, medical health, food, and beverage served in hotels are not subject to pay any VAT.

GST in India vs GST in China

While we talk about GST in China, then maybe we can make a guess, why China is a good player in the market. GST in China is charging tax rates at 0%, 5% and 19%.

GST in India vs GST in Australia

In Australia, the GST is a federal tax collected by the supreme authority and then divided further among the states without any battle of words at the time of a process. The GST was introduced in 2000 with the tax rate of Rs 10% which is still constant at today date.

GST in India vs GST in the USA

GST in India vs GST in U.K

There are three tax rates i.e. 0%, 5% and 20% applicable to goods and services. Most of the goods are covered under 20% tax rates. The VAT on the stamps postage, financial property transactions, food and children’s clothes are exempted items.

GST in India vs GST in Brazil

The most independent and carefree GST system as compared to other is GST in Brazil. It has divided rules of taxes between the states and the center. Brazil has 6 tax slabs which are as follows- 0%, 1.65%, 2%.7%, 12% and 17%.

GST in India vs GST in France

The country who introduced the GST is France.  The GST has been firstly implemented in France in 1954 with 4 tax rate slabs. The rates in this county are chargeable in the slab rates of 2.1%, 5.5%, 10%, and 20%. Among the Tax rates, 20% is the standard rate applicable to most of the goods in France.

GST in India vs GST in Ukraine

GST in Ukraine, a standard rate of tax is applied at 20% and the VAT value is added to the cost of goods and services price. There are some of the supplies that are also subject to the lower rates under 0% and 7%.

Usually, GST at 7% rate is applicable to pharmaceuticals products, medicines, and medical equipment whereas % VAT is on the export of goods and services.

GST in India vs GST Malaysia

GST was implemented in Malaysia with effect from 1 April 2015 with the consistent rate of 6%. Here, Sales tax and service tax are categorized by different tax rates which are 10% and 6% respectively. Some of the items like piped water, the first 200 units of electricity per month, transportation services, and highway toll and health service are exempted from taxation.

The reason behind the dual GST model in India

After the US, India is also a federal country where both the center and the states have assigned the power to levy and collect the taxes through appropriate legislation. The Dual GST model consists of Central Goods and Service tax (CGST) and State Goods and Services Tax (SGST) rates.

In India, both the center and State are assigned with the power to levy and collect tax through appropriate legislation. Moreover, the center and state government have different roles and responsibilities to perform seeing the division of power prescribed. A dual GST has therefore aligned with the constitutional requirement o9f fiscal federalism.

The success of the Implication of GST in India

Impact of GST in India

Complex compliances make GST more difficult to share. The information technology glitches take more time than the anticipated time to resolve any problem. A new GST return filing form is being crafted to help and make the process much less complex for businesses and even the customer also.

Undoubtedly, GST has scrapped a multiplicity of taxes and cess but it also has introduced a new levy in the form of compensation cess on luxury and sin goods. This will later be expanded to cover automobiles.

Eventually, in all cases GST rates are charged between 16 to 20% and India has somewhere takes the tips from this and put down in a similar pattern. Also, the expected Indian Economy growth with the GDP has a great pace as the speculated taxpaying community is likely to get a growth of 5 to 6 times than the current economy in the coming years.

A Complete Guide On How To Sur...

GST Registration has now become a compulsory requirement for all taxpayers having turnover exceeding the threshold...

A Coast-to-Coast Coverage of E...

E-Invoicing in GST is the submission of a digital invoice for goods and services on a common portal. The invoice go...