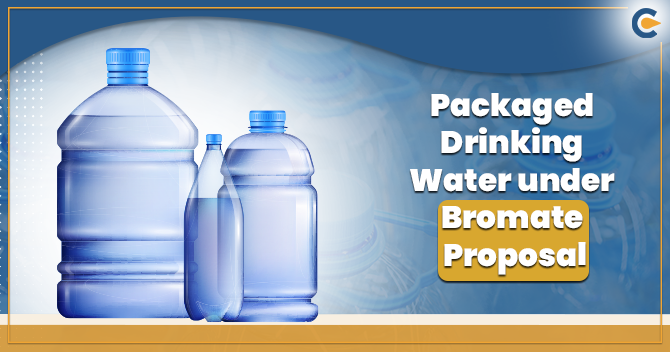 The FSSAI department is authorized to work on food business-related activities. In May 2016, FSSAI introduced a “Bromate Proposal” for 10 micrograms per liter of potentially cancer-causing contaminated drinking water, which is in line with best international practices.

In a written statement FSSAI mentioned that the “bromate proposal” is a draft and will be finalized after receiving input from the shareholders of the companies. The process of setting standards for food articles is a continuously evolving process.

Read our article:Everything you need to know about FSSAI License Renewal & Validity

Parameters Should Be Related To Following Elements

The new standards of bottled water set by the FSSAI licensing authority assumed that this contaminated water could be found in the water in certain cases and set the limits of the percentage of bromate in the bottled water. FSSAI has to be kept in mind ground realities before setting up the bromate percentage in the water.

Suggestion Given by World Health Organization

The World Health Organization (WHO) put some light on the “bromate proposal” and suggested that toxic restrictions ideally should not be present at all in drinking water. In countries such as the US and the European Union, there were some restrictions in laboratories in the year 2005 based on limited capacity.

These countries set the use of the bromate limit at 10% in one liter to make it easier to detect the presence of bromate in laboratory tests. The World Health Organization has suggested that the use of bromate should be in drinking water within a specified range.

The FSSAI updated the list of additives for which the draft was placed in the public domain. After the completion of this standard-setting exercise for approximately 11,000 additives, all issues that arose from discrepancies in vertical standards, such as packaged water, were automatically taken care of.

The list of additives ultimately surpassed all existing vertical standards of additives & toxins. FSSAI packaged drinking water guidelines have been set in a very effective manner.

India is a rich in many forms of natural resources. However, with chronic mismanagement, today the country faces a shortage of water, sanitation, and health care issues in its overall development path. Many disadvantaged communities in the country lack access to safe drinking water, sanitation practices, and affordable healthcare and sustainable systems to enhance their livelihoods.

FSSAI defends the bromate proposal by making ground that bromate as an additive to bread but a toxin for bottled water. The use of bromate in a standard manner will never harm the health of people and cause cancer; it will always help the packaged drinking water to remain fresh.

The list of additives was finalized by FSSAI along with their level of maximum use, which does not deal with toxins. Kindly associate with the Corpbiz expert to know more about the FSSAI standards for packaged drinking water.

Read our article:What are the Types of FSSAI License underlining the Concept of FSSAI Registration?

The Government of India introduced the Food Safety and Standards Act 2006 to regulate the import, distribution, sto...

The demand for food catering business in India is towering high. Those who are driven by the desire to initiate a c...