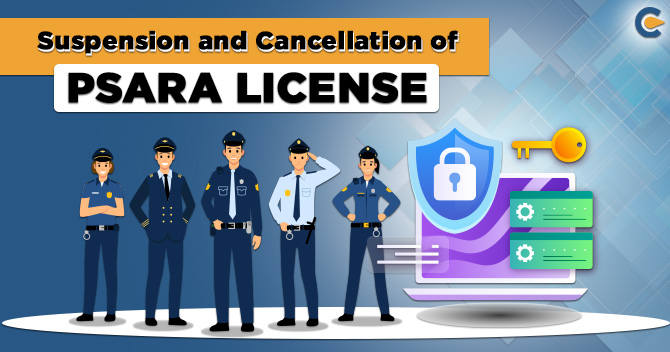 In the wake of this new economic reality and to ensure that the government resources are focused towards better delivery towards internal security, private security agencies can serve as viable alternative perform to traditional police performing non-critical security functions. PSARA License is necessarily required by any person before starting a private security business in India. However, the license can be cancelled or suspended by the authority on violating the norms of the provisions of the PSARA Act or on non-compliance of the conditions as specified. This article is to focus upon cancellation of PSARA license.

The Private Security Agencies not only provide security services but also provides the training to security guards. However, Section 4 of the Act clearly states that no person will carry on or commence the business unless he holds a license issued under this PSARA act to have private security agency.Therefore, it is important to have PSARA license to run a private security agency.

Suspension and Cancellation of PSARA license

1. Under Section 13 (1), the Controlling Authority has an authority to do cancellation of PSARAlicense, on any one or more of the following grounds which are:

2. The Controlling Authority can order for cancellation of PSARA license after recording the reasons in writing. The authority has to satisfy that pending the question of cancellation of PSARA license has been made on of the grounds provided in sub-section (1). When it is necessary to do so, the Controlling Authority can, by making order in writing, can also suspend the operation of the license for the period of not exceeding thirty days as may be specified in the order. The license holder requires showing cause within fifteen days from the date of issue of suspension order, as to why the suspension of the license should not be extended till the determination of the question of cancellation.

3. Every order of suspending or cancelling of a license must be in writing and must specify the reasons for such suspension or cancellation of PSARA license. The copy of such must be communicated to the affected person.

4. No order of cancellation of PSARA licensemust beunder sub-section (1) unless the concerned personhas been given a reasonable opportunity of being heard.

Conditions for Suspension and Cancellation of PSARA license

The two conditions must be compulsory fulfilled up on the cancellation of PSARA License.

Appeals made on Suspension and Cancellation of PSARA License

Note: Every appeal under sub-section (1) of Section 14 of the Act must be made in preferred Form- VII. It must be signed by the aggrieved person or by his authorized advocate and presented to the Appellate Authority in person or sent to him by registered post.

It is required by MHA, in coordination with State Governments, conducts a holistic review and grading of security establishments/duties thereunder. After due consultation with all government and industry factions/participants, categories from non-critical to very critical to be devised and security establishments/duties therein classified accordingly.

However, the state governments monitor the work of the PSA in general. The cancellation of PSARA license can be made by the authority on violating the norms and guidelines as specified in the PSARA Act or modify by the government from time to time.

Are you looking to step into the business of a private security agency in Kerala? If so, then you have landed on th...

The private security sector has witnessed significant growth in past years owing to the growing demand of the corpo...