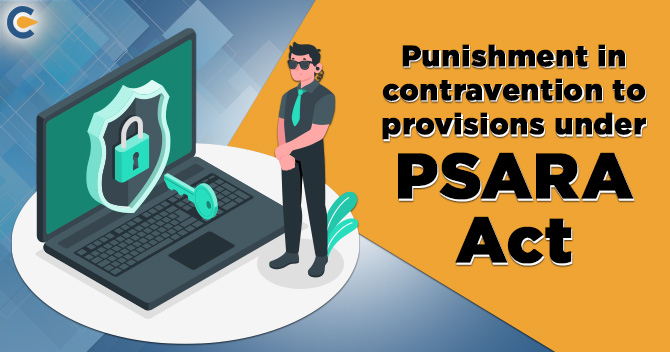 With the traditional policing and national security agencies serving the law and order function, there is an increasing uptake of private security agencies for protection of establishment/goods/person. Industry today requires private security to perform functions more than mere guarding services. However on non compliance with the provisions, required punishment under PSARA act is provided.

The Union Minister for Home Affairs had included private security forces as a viable alternative to state forces in his public address requesting state governments to conduct security assessment for nuclear and defense establishments, iconic structures, major religious shrines and key industrial establishments in the private, public as well as joint sector. However, in violation of public security, there are various punishments under PSARA act[1] prescribed for the private security agencies.

Punishment for contravention of certain provisions under PSARA

Note: For the purposes of this section:-

Offenses to be punishable by trial

Offences have punishment under PSARA Act must be tried by a Judicial Magistrate of the First Class having jurisdiction in the place where the offense is committed.

Offenses to be cognizable

Every offence have punishment under PSARA Act must be cognizable within the meaning of the Code of Criminal Procedure.

Previous sanction of the Controlling Authority necessary in certain cases

No prosecution must be instituted against any person in respect of offenses under sections 4, 8, 9, and 21, without the previous sanction of the Controlling Authority.

No suit, prosecution or other legal proceedings shall lie against the controlling authority or any other officer authorized by it in respect of anything done or intended to be done in good faith under the Act.

The deployment of converging security services, i.e. manned guarding along with technical equipment has an ever-increasing uptake. Advanced security assessment techniques and expertise gained by foreign security services would allow for provision of efficient services to the clients. It would also be imprudent to equate security services with sensitive sectors like defense or other critical sectors affecting the economy such as insurance/banking/financial services. In order to maintain adequate checks and balances, the Government can mandate prior-approval for investment beyond a certain threshold in PSAs.

Who cannot apply for PSARA Lic...

Private Security Agencies are those who are involved in providing security services, and it also includes training...

Over the years, there has been a tremendous increase in the establishment of new ventures due to which the demand f...