Abolishing of Drug Patents: A Boon or a Ban? 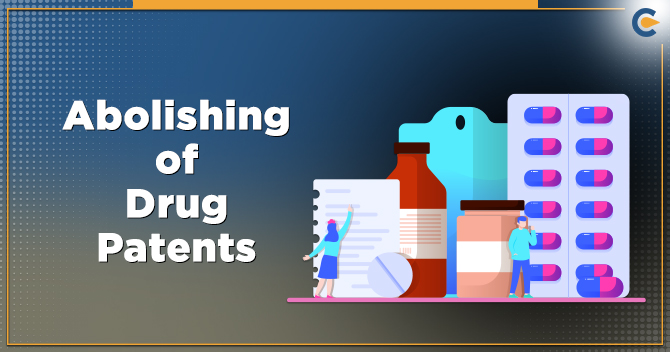 Patent rights were initiated in India for the first time in 1856 and in 1970; The Patents Act was passed that revoked all previous legislations available in India. The Patents Act offers that any invention which satisfies the criterion of novelty, non-obviousness and usefulness can be the subject matter for Patent Registration. India already had a product patent system for all inventions under the Patents and Designs Act. The government introduced the new Patents Act[1] in the year 1970 that barred pharmaceuticals as well as agro-chemical goods from eligibility for patent registration. This elimination was initiated to break away India’s reliance on imports of drugs in bulks and formulations and also provide for the development of an independent pharmaceutical industry. In this blog we will shed light on Abolishing of Drug Patents.

Impact of the World Trade Organization on Drug Patents

The establishment of the World Trade Organization has led to a remarkable growth in world trade. The Trade Related Aspects of Intellectual Property Rights (TRIPS) agreement was discussed during the Uruguay round that discuss about the General Agreement on Tariffs and Trade (GATT) and one of the primary reasons for integrated intellectual property issue in the GATT structure was that of drugs industry. India signed the GATT on 15 April 1994, thus making it obligatory to meet the terms of GATT, including the TRIPS agreement.

India is thus required to meet up the minimum standards prescribed under the TRIPS Agreement with regard to drug patent. India’s patent law should now contain provisions related to availability of patents for both pharmaceutical drugs and inventions. Patents registration is to be granted for a term of 20 years to any invention of a pharmaceutical drug or process of invention of that particular drug which fulfils the established criteria.

What is Drug Patents?

Pharmacy companies spend billions on testing as well as developing drugs. So to help them recover the money spent on the Research & Development, the government grants them exclusive Right for their Intellectual Property. Drug patents allow pharmacy companies to recuperate their investment in inventing a particular drug, invest in innovation and push the companies to develop more affordable drugs.

Such drug patents furnish the pharmacy companies with protection, providing them with the exclusive marketing rights and sell those drugs. Once the license is terminated, other companies can use the published records regarding the process of manufacturing of drug and can develop a cheaper version of the drug also known as generic medicines.

What is the Validity of Drug Patent in India?

Around the world, the validity of drug patents is for 20 years. In India Drug patents is also valid for 20 years after which the manufacturer of generic drug can sell their version of the Drug. Expiring of Drug patents provides the generic companies the green signal to begin their marketing and selling thus ending the monopoly.

What is the Benefit of expiring of drug patents?

Expiring of Drug patents helps in ending the monopoly over any drug. Once generic medicines hit the market the cost of drugs falls quickly, making the drugs more affordable to the general public. This can also increase as well as encourage the market competition which leads to more assortment and option for the general public. It also ensures that necessary and life-saving drugs reach the general public at a reasonable price.

On the other hand, pharmacy companies buy the rights to Drug Patents for sale from other business and extend their monopoly right over that drug.

Is it right to extend the Drug Patents?

Patent protection makes sure that innovation provides pharmacy companies with a commercial enticement. Big Pharmacy companies feel no desire to experiment and develop new drugs if no commercial incentives are involved. The patent system for drugs inspires an interest in R&D and also safeguards the interests of the researchers.

Whereas the system may not be perfect but doing away with it could lead to a halt in research. If we abolish drug patents then no one will even try to come up with new drugs in fear of getting exploited. Hence the system does have its troubles; the best solution would be restructuring and not abolishing drug patents.

Governments should also aim for a thoughtful balance between novelty and reasonable pricing. Though it is essential we provide drug manufactures a profit motive but it should not come at the cost of bankrupting customers. Laws should be put in place to avoid corporations from not spending on research and just purchasing drug patents for sale. The patent system should move forward for innovation and not support profit maximization.

Impact of Indian Patent Law on the Local Pharmaceutical Industry

The Report on the Revision of the Patent Law that was submitted by the Patent Law Commission in 1959 that was led by Justice N. Rajagopala Ayyangar stated that in the year 1959 foreigners held 80% to 90% of India’s patents. Out of which 90% of the products were not manufactured in the Indian Territory.

Foreign companies used to block the manufacturing of their patented drugs in India causing lack of activity in the Indian pharmaceutical industry. The Commission considered that the patent system had been used by multinational company to dominate the Indian market particularly in the pharmaceutical, food and chemical industries.

Market monopoly has led to high product prices. Hence, the Commission also recommended that only method or processes in the aforesaid fields should be patentable, contradictory to the Indian Patents and Designs Act 1911 that granted patent to both product and process patent in the pharmaceutical sector.

The mailbox application mechanism was available during the transition period which allowed India to meet the TRIPS necessities and also to comply with India’s own development needs. India’s transition period to fulfill with the TRIPS requirement regarding pharmaceuticals was for a period of 10 years starting from 1995.

According to Indian Patent Act, after the termination of three years from the date of granting of patent, any person interested can compose an application to the Controller of the Patent. The applicant is required to procure a voluntary license from the patentee before applying for a compulsory license. It should be done within 6 months from the primary request; the applicant is permitted to file for a compulsory license.

Abolishing of Drug Patents in India helps in ending the monopoly of big pharma companies over any drug. So, according to the aforesaid things, abolishing Drug Patent is good for the general public as the prices of drugs decreases. The government of India should aspire to maintain a balance between originality and rational pricing. Although it is essential to provide drug manufactures a profit motive but not at the cost of bankrupting the customers. Laws should be provided to avoid companies from not spending on research and just purchasing drug patents for sale.

Penalties, Suits and Appeals A...

The patent is a legally certified document provides by the government to the person who has made any new invention...

The inventions related to Biotechnology are very important for human development. The biotechnological inventions h...