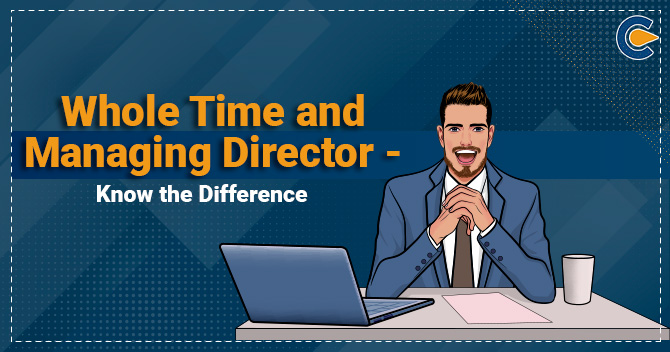 What is the Meaning of Whole Time and Managing Director?

It is assigned with significant powers of management of the company’s affairs and comprises a director occupying the managing director position. The explanation of the definition particularly provides that the power to perform clerical or managerial acts of a routine nature on being certified or authorised by the Board of Directors (BoDs) shall not be considered to fall within the considerable powers of management. Such acts comprise:

The position of Whole Time and Managing Director can be differentiated as under:

However, the procedure & conditions of Whole Time and Managing Director are more or less the same; there are some noteworthy differences between the Whole Time and Managing Director. However, as both are considered to be the Key Managerial Personnel of the company, their key role is to oversee a company’s performance, investment, operations and provide strategic guidance and direction to the Board to make sure that the objectives of the company are successfully completed.

Read our Article:Directors under Companies Act, 2013

Shelf Prospectus as per Compan...

Resolutions Passed at an Adjou...

Resolutions passed at an adjourned meeting is a provision mentioned under section 116 of Company act 2013 states th...