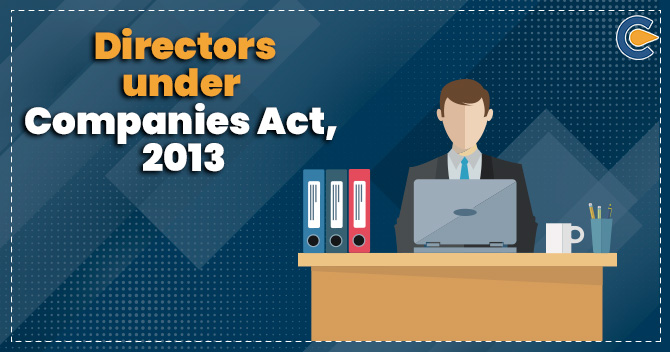 A company is a legal entity, it has no physical existence, and it can act through a natural person only. The Company hires professionals to direct its affairs, and they are called directors, so the directors are the persons who act on behalf of the Company. The Company deals with the appointment, removal, qualification and disqualification of directors.

The Directors are defined under section 2(34) of the Companies Act, 2013 as “a director appointed to the board of a company”. A director is a natural person appointed by Company to give directions to Company in which he is appointed. Such directors are also called officers of the Company.

They share the responsibility of achieving all the goals mentioned in the MOA of the Company. Directors are involved in the management of tasks and execution, supervision and control of such tasks. The main aim of directors is to achieve the ultimate aim or objective of the Company, and qualification and disqualification of directors and even their appointment and removal are taken care of by the same Company.

Primarily, the board of Director is responsible and accountable for the followings:

The followings are the types of directors who are part of a company:

Such Director is also known as a Simple Director. They attend every board meeting and participate in the matters put before in the same. They are neither whole time directors nor the managing Director.

According to section 149(3) of the Act, there should be at least one person as Director in the Company who has stayed in India for not less than 182 days in the previous calendar year.

Section 2(54) of the Companies Act, 2013 defines the Managing Director as a directors who, by virtue of the Company’s AOA, agreement with the Company, board of Director or resolution passes in general meeting has substantial power of managing affairs of the Company.

A whole-time director is the Director who is in whole-time employment of the Company.

Section 161(2) of the Act, the alternate Director is appointed by the Company if a director is absent for more than three months in India. The board of directors appoints such a director when a resolution is passed in a general meeting or authorised in the AOA of the Company. Such an alternate Director cannot hold the office for a term more than the Director in whose place he has been appointed, and he should vacate the office the moment the original Director comes back.

Section 161(1) of the Act says that any person can be appointed as an Additional Director by the Company.

A director who has a professional qualification and he has no pecuniary interest in the Company.

A director who or his relatives, family, firm, body corporate or another association is interested in a contract or arrangement entered into or on behalf of the Company as stated under section 2(49) of the Act.

Those who are nominated by the Company for grant of loans by the financial institutions, banks or government are called Nominee directors.

According to section 149(1)(a), there should be at least one female Director in listed companies or certain public companies.

As per section 151 of the Act, the small shareholder has the right to elect at least one person as a director.

According to all the provisions related to Director, the following can be called qualifications of a director:

According to Section 164 of the 2013 Act, the following can be reasons for disqualification of directors:

Conversion of Public Company i...

The Conversion of Public Company into Private Company is mentioned in the Companies Act, 2013, and Incorporation of...

How to get easily a Name Chang...

There are numerous reasons to make changes in the name, for instances, individual inclination, and change in the re...