What are the Requirements Before Choosing Company Name in India? 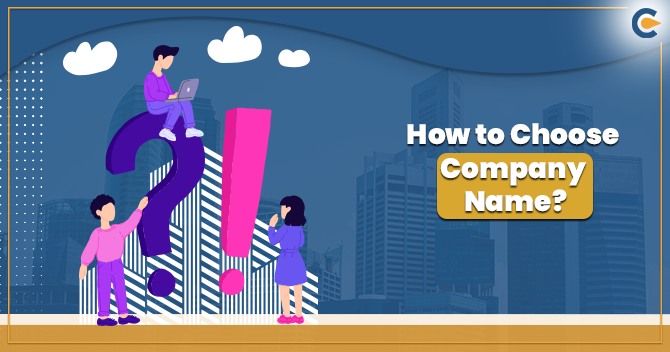 Entrepreneurs cannot start a business without a business name! But the process of choosing the right business name that is attractive, and that describes what your business is about is not easy. The business has largely failed in the past due to a name that has not worked yet, so it is important to pick the right label.

Choosing a catchy business name plays a vital role in it is going to be successful, and it is the key to differentiate you from your opponents. Consumers connect a company name with the value it offers to them. Choosing the right name for your company is not an easy task. Choosing a suitable and practical name plays a big role in future prosperity for any new business or start-up.

A company name makes the first impression on potential customers. Therefore, it becomes crucial to choose a well-suited name, which has to do with all efforts. The nomenclature of a company does not only cover the technical aspect, but it also includes some legal proceedings.

Different Types of Company Based on Name

Choosing of Company Name according to Business Activity and Industry

Once the entrepreneurs understand what your company does & whom it is trying to serve, it shall give you a platform for names in order to choose from or a starting point. You should remember that your target audience should be able to connect with the name.

Negative Example: – “Chubbybrain” is a company that funds other companies, however, because of its name, ‘Chubbybrain’, no one knew what they did as business operation as they couldn’t relate the name to fundraising. Positive example: – Glucon D is a company that prepares energy powder, and its name suggests in itself that this brand is known among the people as glucose energy drink.

MCA Rules that Entrepreneurs should Follow while Choosing a Company Name

Under the Companies Act, 2013[1], the MCA (Ministry of Corporate Affairs) has laid down certain rules on the naming of a private limited or LLP company. According to the Act, to approve a company name, it must be unique and descriptive, & desirable. The below discussed are both the aspect of MCA Rules.

This part of the company’s name depends entirely on the creativity of the owner. Sometimes, people can add names just by adding the names of the directors. It has nothing to perform with the service provided by the company or even has any definite meaning.

If the entrepreneurs can’t think of a creative name, they can make it direct and descriptive of the service or product which they live in. This means that the company name communicates with consumers in the field of work or the nature of services offered.

The below discussed are the list of undesirable names.

The selection of any company name is a challenge in itself. The following words &  combinations thereof will not be used in the name of a company in English/ any of the languages portraying the same meaning unless and until the previous approval of the Central Government has been obtained for the use of any such word/expression:-.

Concrete Lines Needs to be Remember while Using, Adapting or Confirming any Company Name.

Basic Knowledge to Have Before Selecting a Company Name

Having a unique and eye-catching name gives the company a boost by a reasonable margin. Clever names with intelligent wordplay make a good impression of the company as well as the founders. Consumers have a greater inclination towards such companies.

The correct name of your start-up has a significant impact on your success. The wrong name can have a negative effect like failure to attract the right customers. Sometimes it also leads to legal and commercial hurdles. In the other situation, a powerful and clear name is extremely beneficial in branding and marketing your business and its products/services.

Kindly contact with CorpBiz to get professional assistance to choose the right name for your business.

Read our article: Learn the Process for the Reservation of Company Name

Guide on Investment in a Priva...

A ‘Private Limited Company’ is owned either by shareholders/company members or non-governmental organizations....

An Outlook on Registration Mis...

Whether it’s a question of attending an important meeting or completing a vital project, every employee needs to...