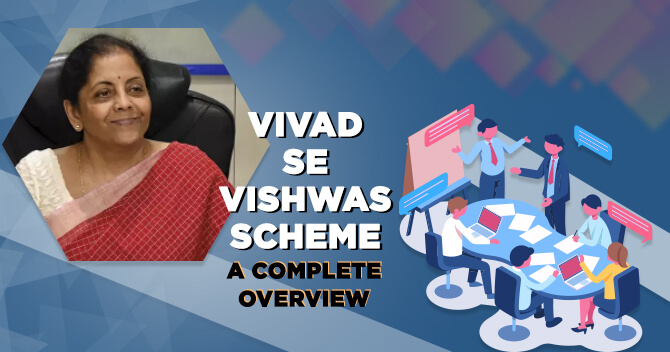 This bill proposes discounted or less payment for the dispute settlement. The condition is- only if the taxpayer makes the payment before or on 31 March 2020.

If any taxpayer wants to avail the benefit of this bill after or on 1 April 2020, he/she has to pay a certain percentage of disputed penalty, or interest, or fee.

The main objective of Vivad Se Vishwas Scheme is covering all the matters pending (before 31 January 2020) on any appellate forum. Now the taxpayers can end their ongoing tax disputes by withdrawing their appeals. Not only that but also by filing a declaration form and paying the disputed tax.

At the present time, 4.83 lakh direct tax cases are pending in different appellate forums. Ex- Income Tax Appellate Tribunal (ITAT)[2], Commissioner (Appeals), High Court, and Supreme Court. But with the proposed scheme, now a taxpayer needs to pay only the disputed tax amount. Alongside, the person will get all waiver of interest and penalty. Here is a condition- only if the taxpayer pays the disputed amount before or on 31 March 2020.

The benefit of the Scheme

Vivad Se Vishwas scheme will bring finality to all those tax litigation, pending for a long time for the taxpayers and in various appellate platforms. If the tax authorities take this as a campaign and educate the taxpayers about the effectiveness of this scheme, the Government and taxpayers both will be in a win-win situation.

Amount Payable for Resolution of Disputes

The Exclusion from the Vivad Se Vishwas Scheme

Those taxpayers who have tax arrears regarding disputes won’t be able to avail of the Vivad Se Vishwas scheme. Type of tax arrears related disputes are as follows-

GST payable on the amount char...

Ministry of Finance has issued a clarification which was regarding the numerous queries on the issue regarding the...

The GOI comes up with yet another set of measures to increase job creation and to provide financial aid to affected...