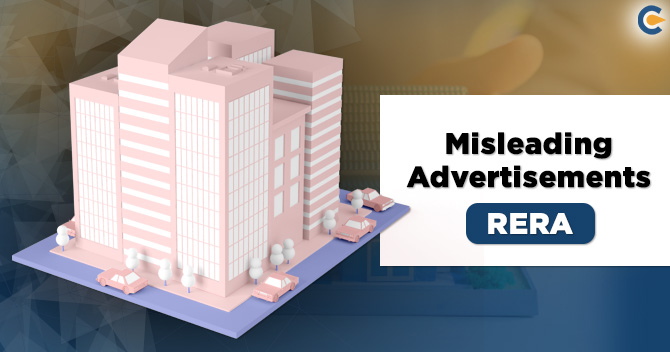 The term “unfair practice means” a practice that, promote the sale or development of any real estate project adopts any unfair method or deceptive practice including any of the following practices, namely:-

The Definition of the advertisement reads in Section 2 (b)

The “advertisement” means a “document described or issued as an advertisement by any medium and includes any notice, circular or other documents or publicity in any form, informing persons about the real estate project, or offering for sale of a plot, building or apartment or inviting persons to purchase in any manner such plot, apartment or building or to make advances or deposits for such purposes.”

Read our article:Guide: Duties of Promoter under RERA

The Misleading real estate advertisement has the following Consequences. Those are as follows:-

Revocation of Registration granted under RERA

(1) The Authority can on receipt of a RERA complaint or suo motu in this behalf or on the recommendation of the competent Authority, revoke the registration granted under section 5, after being satisfied that-

(2) The RERA registration granted to a promoter under section 5 must not be revoked, unless the Authority has given to the promoter not less than thirty days notice, in writing, stating the grounds on which it is proposed to revoke the registration, and has considered the promoter shows any cause within a period of that notice against the proposed revocation.

(3) The Authority can instead of revoking the registration under sub-section (1) permit it to remain in force subject to further terms and conditions as it thinks fit to impose in the interest of the allottees, and any such terms and conditions so imposed must be binding upon the promoter.

(4) The Authority, upon revocation of the registration-

It has the commitment to honest Advertising and to fair competition in the market-place. It stands for protecting the legitimate interests of consumers and all concerned with Advertising – Advertisers, Advertising Agencies, Media, and others who help in the creation or placement of advertisements. This was forced before RERA implemented and also operates now.

The purpose of a Code is to control advertisements’ content, not to hamper the sale of products which can be found offensive, for whatever reason, by some people. Provided, that advertisements for such products are not themselves offensive, there will normally be no ground for objection to them in terms of this Code.

The legal system that was once considered as time trapped in terms of relief, and the buyers were left at the lurch of builders, has been sea changed. The new law and interplay with existing frameworks allow buyers to mend the willful disobedient builders and get them to the task. These measures against misleading real estate advertisements have now enshrined new hopes and faith in the real estate sector. CorpBiz will be happy to serve you if you are in middle of any issues of RERA and its registration aspects. We have in-depth and practical experience in dealing with various issues and RERA litigation before different RERA authority.

Read our article:Penalties under RERA on Builders and Agents

How is it beneficial to invest...

After the introduction of the RERA Act, 2016, it is to protect the homebuyers, infuse transparency into the real es...