Transfer and Transmission of Securities – Procedure of Transfer, Time Limits, and Penalties 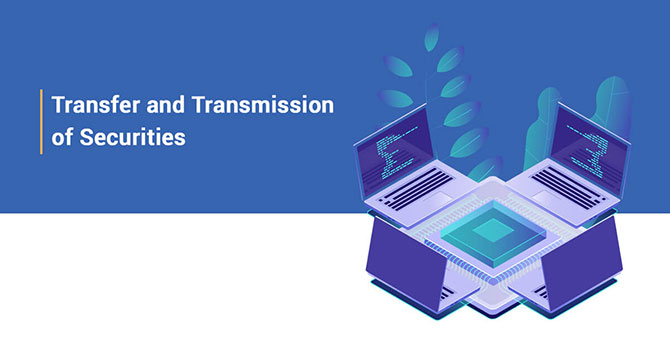 The Shares of an individual inside a company are transferable which facilitates the company in acquiring permanent capital and liquidate investments into the shareholders. But there are some constraints under which the securities are transferred. They are transferable by the acts mentioned in the Articles of Association (AOA) of the company under which the private companies are restricted. Here in this article, we will see in detail the meaning, procedures for the transfer and transmission of securities, the time limits, and its penalties.

What is meant by the Transfer of Securities?

Who all are involved in the Transfer of Shares?

Which law states about the Transfer of Shares?

According to Section 56 of the Companies Act, 2013[1], securities are movable property and are transferred in a manner provides by the articles mentioned in the AOA of the company. A Shareholder is free to transfer shares to a person of his own choice, whereas shares in a Private Limited company are not freely transferable.

Procedure for Transfer of Shares

There are certain time limits under which transfer and transmission of securities takes place.

Transmission of Securities is quite different from the Transfer of Securities, but many of us think these two terms as the same. Here, the shares are transferred to the deceased and the official assignee of the insolvent. Transmission of shares is an automatic process when the shareholder dies and immediately passes to the personal representative or if a member is declared bankrupt.

Following steps shall be followed for the transmission of shares

Probate : If a member of a company leaves after him a letter of administration or a will then after his death the survivors shall get a copy of ‘will’ which is certified with the competent Court’s of jurisdiction seal. Thus, this will’s certified copy is called a ‘probate’. There is no requirement of Succession certificate when letter of administration and probate is issued.

What are the differences between Transfer of Shares and Transmission of Shares?

Transfer of Shares and Transmission of Shares are often taken in a similar way but there is difference between these two terms. Let’s see the Comparison Chart:

Read our article:MOA and AOA: Why They Are Vital To Setup an Institution

A dividend means the proportion of the profit that the company distributes to its shareholders as a return on their...

Alternative Investment funds (AIF) in India are witnessing exponential growth since their inception in 2012. The nu...