How does a Company Issue Debentures to the Public? 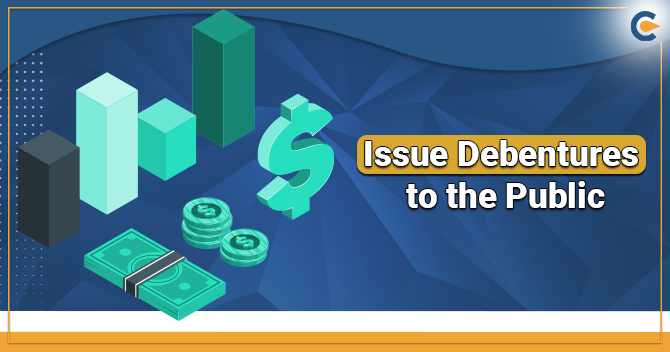 The issue of raising funds for a company is the most challenging thing that the company faces during its initial stage. Though there are several options available to choose from such as personal investment, Angel investors, Venture Capitals, Bank loans etc, it is always a wise option to research on all the available options first. Issue of Debentures to the public is one of the methods by which companies raise the fund and in return the companies offer interest to the public which is termed as Debenture Interest. They are the medium to long-term debt instrument used by companies to borrow money at fixed rate of interest. Here in this article, we will see in detail the procedure for the issue of Debentures.

What are Debentures according the Companies Act?

According to the Companies Act 2013[1], Debentures are the debt instrument that indicates the debt, whether secured by the asset of the company or unsecured. They represent the debt of the company which contains the details such as Loan amount, maturity date, and rate of interest. Also, it can be transferred as per the Article of Association (AOA) of the Company.

Features of the Debentures

Some of the features are listed below:

What are the types of Debentures?

Debentures in a company are classified based on different categories which totally rely on the agreement agreed between the corporation and debenture holders. These are mentioned below:

Redeemable debentures carry a specific date of redemption which is mentioned in the Debenture Certificate. The company is liable to repay the principal amount to the debenture holders on the maturity date. They can be re-issued only if they have been canceled before.

Irredeemable Debentures do not have the date of redemption mentioned in the debenture certificate.  These are redeemed either on the liquidation of the company or when the Company chooses to pay them off.

These debentures are fully convertible into shares and these shares are subject to issuer’s notice on the ration of conversion determined by the company.

Here the debentures holders have the option to convert their shares partially into shares, through which they will act both as Debenture holder and shareholder.

These debentures are not convertible into the equity of the issuing company. Instead the Debenture holders are compensated with a higher rate of interest.

Secured Debentures are secured by creating the charge on assets or property of the company. Here the debenture holders have the right to recover the principal amount in case the company fails or defaults in repaying the amount.

These are the non-secured debentures in which there is no charge on the assets of the company.

In Registered Debentures, the name, address and other holding details are registered with the issuing company. This is done for the purpose in case the debenture is transferred to other shareholder, the interest and principal will be transferred to the previous holder. So to avoid this, the debentures are being registered.

Unregistered Debentures are not recorded in the company’s record book and are easily transferable without any need for registration.

What are the Obligations a Company shall take while issuing Debentures?

The Company while issuing the Debentures to the Public gives an option to the public to convert them into shares, either wholly or partly at the time of redemption.

There are certain limitations which need to be followed. These are listed below:

How do Companies issue Debentures to the Public?

There are certain procedures that need to be followed which are listed below:

A Board meeting is called to decide which kind of debenture is to be issued.

Conditions for issuing of secured debentures

Issuance of Debentures has its other cons apart from the advantages. These are listed below:

Borrowing money from the bank is the last resort of funding that companies prefer for raising funds. But there are certain drawbacks of taking loan from the banks as they charge higher interest rate. General public by investing in the Debentures of the company get a good return in comparison to the government deposit schemes or Bank deposits. These advantages compel the companies to issue debentures while the public also shows interest in buying.

Transfer and Transmission of S...

The Shares of an individual inside a company are transferable which facilitates the company in acquiring permanent...

Alternative Investment funds (AIF) in India are witnessing exponential growth since their inception in 2012. The nu...