Changes in Secretarial Audit in the Market: MCA 2020 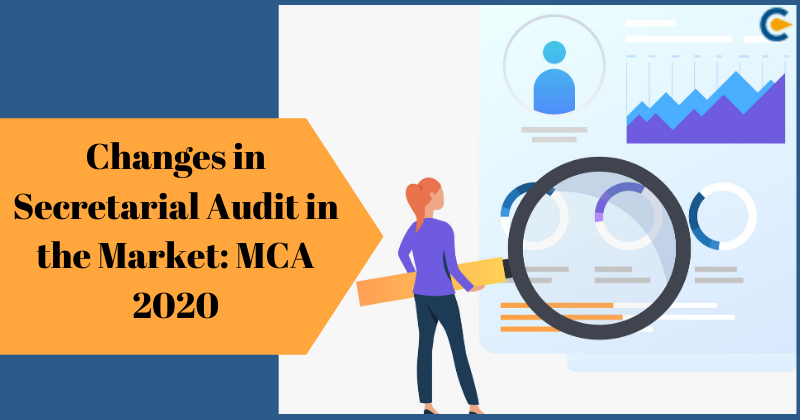 Section 204 of Companies Act, 2013 contains provision for Secretarial audit for bigger companies. It was proposed as a significant step in improving and enhancing the corporate governance and ensuring the efficient compliances of the regulations applicable on the company.

Secretarial Audit is an auditing conducted to verify the Compliances of different legislations that are applicable to the company i.e. including Company law but not limited to that only.

Overview: What Is the Purpose of Secretarial Audit?

What are the Companies that derive Under Secretarial Audit in India?

Under the Companies Act 2013[1], the following is the list of companies that have to be audited by the independent practicing company secretary to procure the Company Audit Report.

Turnover is the total amount of money, which makes by the sale, supply/distribution of goods and services provided to the consumers during the whole financial year. All the subsidiary companies of a public company or other companies that fall under this criterion have to conduct an Audit.

Who meets the requirements to carry the Secretarial Audit?

The following are the advantages of secretarial Audit –

What are the amendments by Companies Amendment Rules, 2020?

A company must have a whole-time company secretary, who has a paid-up share capital of five Crore Rupees or more-veiled under rule 8.

Every single Private Company must have a whole-time company secretary having paid-up share capital of 10 Cr rupees or more.

Provision connected to Secretarial Audit is now pertinent on the subsequent list of Companies:

What are the Auditing Standards for CS PAN India to abide?

The practice of Auditing Standards that were earlier introduced has been mandated by the Institute of company secretaries of India (ICSI) on an intentional basis in July 2019. All the audits held in the companies will stick to these Auditing Standards preliminarily w.e.f 1 April 2020.

Read our article:Audit of Charitable trust or NGO under section 12A (b)

What are the segregated standards in the new Audit Segments?

CS certificate and Audit Engagement letter is the eligibility to conduct the Audit while practicing. If any of the above-mentioned documents is missing, it will restrict the CS from performing the Audit. For an easy understanding of this subject, Auditing Standards are separated into four parts.

Auditor need to adhere with stated conducts & number of audits

The complete process of Audit is founded on execution, planning, and documentation. Not any of these could be avoided in the audit.

Proper Audit Plan – Before beginning the process, it is crucial to setting up a roadmap. The flawless audit plan stretches all the answers for where, what, when, who, and how. Aims of execution, audit, location, and a projected plan of the audit must be prepared.

Collect Auditee’s Information – Auditee’s nature of business and laws applicable to the business must be known to Auditor, and must be fully aware of whole applicability as required.

Prepare Audit Checklist – An audit checklist has to be continued by the auditor rendering to which the audit procedure will flow. It will also give or take nearly all the compliance requirements which will be identified from time to time. Therefore, it can be said that an audit checklist is an obligatory need for an audit to meritoriously work.

Complete Paper Work – Auditors are required to make reports and affix all proofs and documents that are needed. All the audit evidence, work done and outcome of the audit must duly be stated in the end reports/documents.

The auditor needs to follow the mentioned basic protocols when it comes to assessing the end results strained out from the audit evidence and contribute their estimation through a report.

The standards established for audit estimations

Misstatement – Under the standard sets for audit estimations, misstatement suspects the noting down if any information is false, deceptive, omitted, or is incompatible with the auditors’ examination.

While providing the estimation, the auditor must deliberate all the explanations, conflicting understandings, other party statements, etc. resulting in a complete analysis of the reports/statements.

The Auditor must abide by the following principles:-

The auditor in the explosion of report comprises all sections under the title of ‘Auditor’s Responsibility.’ The resistance of audit will work being showed as per the simple Auditing Standards. Moreover, the proof the auditor has to be obtained the reasonable declaration, records prepared and the whole paperwork is free from any false statement.

The date and place of signing the report must be stated by the auditor in case the report is allotted by two different auditors at altered places or changed dates.

The consequences of new modification in companies (Appointment and Remuneration of Managerial Personnel) Amendment Rules, 2014 are:

The audit report is complete of an audit that is equipped by the auditor steering the audit. The report comprises name, nature, place of the scope, business, and objectives of the business, auditor’s estimation, and examination on the locus of the company in the market, in addition to a lot more. Moreover, audit report must be organized in detail displaying the state of affairs of the auditee. Accordingly, the amendment has abridged the employment chances for the Company Secretaries in the Private Companies, and on the other hand, it has amplified the possibility of work for a Practicing Company Secretary in India.

Summing up the whole, the entire contents of this blog have been developed grounded on pertinent provisions and are only the views of the authors. Nonetheless, the author has made ultimate exertions to provide authentic facts. Conversely, CorpBiz specifically disclaims all and any liability in dependence upon the insides of this blog. Here, at CorpBiz, We have a dedicated team of professionals including CA, CS. If you are looking for an auditor, do give us a call.

Read our article: Different Committees and Their Functioning as per Companies Act, 2013

What is Corporate Social Respo...

With globalization Corporate Social Responsibility (CSR) has got much recognition during the past few years. It has...