An Overview of Roles and Functions of NGO in India 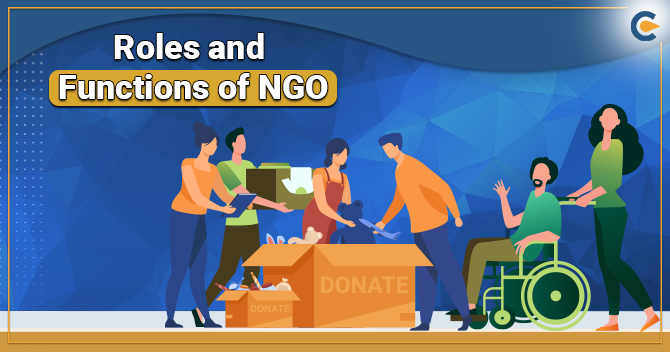 Non Governmental Organisations or NGO are the organisation which is concerned with handling different types of activities which aims for the benefit of society at large especially the underprivileged people.

As the name itself says that it is an NGO and also referred to as a non profit organisation that works independently and without any pecuniary aid from the government even though the NGO functions with the government agencies in close coordination for executing their projects. Therefore, the roles and functions of NGO in India is really a significant one and serve the major purpose of development and growth.

What are NGO and its Functions?

The functions of NGO deem to have a legal status as they are registered under the Societies Registration Act, which is a Central Act for registering not for profit registration. Thus, because of the functions of NGO in India it signifies broad range of organisations which may be non-governmental, quasi or semi governmental and includes both voluntary and non-voluntary organisation, etc.

NGO acts as a mediator between government and citizen. When few issues that the does not reach to government or are not solved by the government then functions of NGO play a significant role in assigning these issues to the government and few issues are intentionally looked by the NGO. Their main aim is to make the earth a better place for every human being who is suffering.

The function of NGO is to focus on all the issues concerning human rights, social, environmental and advocacy. They work to promote and improve the social and political conditions of the society on a broad scale. Some of the functions of NGO are:

Read our article:An Outlook: Registering an NGO in India

What is the Importance of Establishing an NGO?

The functions of NGO contribute its big hand in making progress in developing the socio-economic condition of our country. But because of its vast democracy there are still various issues and millions of people who still need the access to fulfil their rights. The important functions of NGO has positively affected the given below sectors:

But even today, there is uncontrolled economic inequality and people are struggling to get the basic necessities of their life such as health, food, clothes, home and education. This is when the NGO comes up to help and serve. They do their job to fill the gaps left by the government[1] and works for improving the life of the marginalised communities.

What are the Roles of NGO in Indian Context?

The functions of NGO play a major role and have brought social change for promotion and development of the society. It has proved that these organisations are working for various parts of the world and are doing their work in serving the humanity and other good cause. It is important that the members of the NGO are educated, inspired, enthusiastic and working in the interest  and properly carrying out the functions of NGO. Few of the roles of NGO are given below:

NGO plays a crucial role in organising the public inconvenience and becomes an advocate to the societal problems and needs. They play a significant role in lending voice to the poor and needy.

It is one of the functions of NGO to ensure that the government is responsive and are solving the problems of the citizens thus making the governments work accountable. NGO is also authorised to give suggestions and encourage improvement and flexibility in the government’s policymaking by giving their own research teams and expertise.

The non-profit organisation works as a mechanism through which people worried about any social or economic difficulty which can respond and lend their helping hands. NGO help in beneficial conflict resolution and creates the environment of trust and confidence.

The non-profit organisation proposes substitute perspective that includes the capability to carry out a meaningful dialogue with disadvantaged communities. Many NGO are working to conserve and encourage India’s diverse culture. They have different communities all across the world who is participating to serve the same interest of NGO.

The performance of major functions of NGO has come a long way in working for women empowerment. Few of the examples like fighting against sati, dowry, cruelty, other social menaces to educating women, lowering the female foeticide rate, employment to female, etc.

It is still giving their best in removing gender inequality .There are many foundations working for such causes like Sewa, Agrani foundation, Eklavya, and Environmental Action Group etc.

This area needs the maximum attention because nobody is compromising their present needs and is destroying natural resources to achieve their selfish goals.

Therefore, NGO is keeping an eye to all of this and coming up with control measures to prevent an overutilization of natural resources which is the reason to environmental threats which later cause health problems and natural calamities.

What are the Activities Undertaken By NGO?

Following are the activities undertaken by NGO, which are as follows:-

NGO is a voice for every individual. Researching, analysing and to inform the public about the prevalent issues and to organise citizen action by conducting media campaigns and other kinds of activism.

NGO acts as an agent between various sectors and groups.

NGO works as a mediator and facilitator in solving resolution.

It functions the delivery of essential humanitarian and other social services.

NGO acts as a ‘watchdog’ or independent ‘auditor ‘of government and corporate performance and accountability.

The NGO has a major role and is the biggest reason for the deprived people’s development in the society. It is also performing commendable job in this direction. It has undertaken various projects like eradication of poverty and are working upon various social evils. It has contributed in the construction of dams, railways and roads and has made availability of all the basic facilities to the underprivileged, rural areas and vulnerable sections of the society. The functions of NGO is setting an example for serving the humanity. It is following the fundamental principle of “Sarvajan hitay – Sarvajan Sukhey” and therefore has a long way to go in nation building.

Read our article:What are the Roles, Scope & Differences in SHG and NGO?

Trusts are established to lay out legal protection for the Trustor's Asset. The Trust, whether Public Trust or Priv...

Is there any Exemptions Availa...

In order to take the exemption related to Section 11 under NGO, the institution should be registered as trust. More...