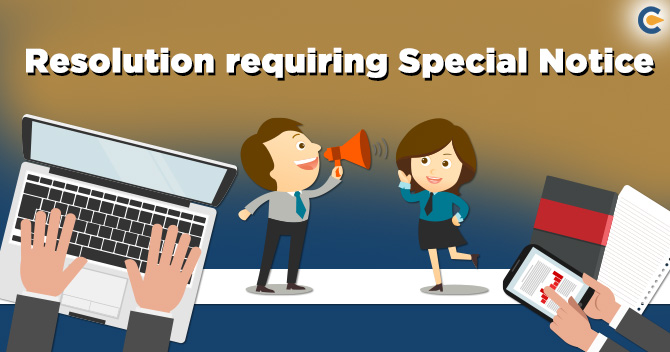 This provision under Companies Acts section 190 states that there were a few numbers of resolutions that cannot approve without prior notice given to the company.

After getting a successful approval of company registration, there are few things needs to be considered, such as a special notice shall be provided by the board members that hold 1 percent of the total voting power or have holding shares of not less than 5 Lakh rupees.

It’s worth noting that the special notice doesn’t always signify that the specific resolution is an important one. Generally speaking, all matter that comes under the radar of particular notice is ordinary resolutions.

Here is the list of instances that demand special notice as per the provision of the Act.

Notice by the requisite number of members

The notice concerning specific resolutions needs to be sent by a member not earlier than three months and at least 14 days before the Annual general meeting. Such a time frame shall not include the day the notice is forwarded and the day of AGM.

Section 142 conferred on the company’s member the right to receive notice of any resolution, which was to form part of the plan to be dealt with at the annual meeting.

The obligation of the Company under Resolution Requiring special Notice

Once the notice is received at the disposal, the company must notify its members at least seven days before the AGM. Such notice must replicate the footprint of any general meeting as far as its flow is concerned.

Wherever it becomes difficult for the organization to conventionally notify its members, the newspaper that supports English and Vernacular language can use it as a publication medium. The newspaper must have wide circulation in the State where the company’s registered office is situated. The notice must notify the concerned official at least seven days before the Annual General Meeting.

Infringement of the section

This section does not procure any penal to address the infringement of the section. Hence, the enforcement of the section 450 Act becomes necessary. According to this very Act, the company and its officials on the defaulter list shall be subject to a penalty of Rs. 10,000. Moreover, if the violation continues, then the penalty of rupees 1,000 will be imposed on the defaulters.

The Companies Act 2014[1] has a different approach toward the contravention of rules. Under section 30, the defaulters concerning the notice of the resolution shall be subjected to a fine of Rs 5,000. Meanwhile, the penalty of Rs 500 per day is imposed on the continual infringement of rules. The violation committed in this section is compoundable under section 441.

The Board of Directors is the crucial personals who run the management of the company. However, some of the management power is shared with shareholders that can be effectively used in the general meeting—resolution maybe ordinary and special resolution.

What are the resolutions?

A resolution is nothing but a strategic decision made Director or shareholder of the limited company. If the majority of the board member cast their vote in favor of the decision, a resolution is deemed to be passed. Two type resolutions typically pass in the General meeting are ordinary resolutions or special resolutions.

Shareholders and board members hold the necessary authority to pass any kind of resolutions at the general meeting. The collective decisions of directors are typically referred to as ‘resolution’. These decisions are bound to be passed at AGM.

Read our article:Demand for Poll under Companies Act 2013: An Overall Regime

What is the ordinary resolution?

Whenever a higher percentage of board members vote in favor of a resolution is known as Ordinary Resolution—the resolution approved by more than 50% of the members available at the Annual General Meeting.

The following modes should pass it.

The resolution inclined to vote must be decided by the show of hands unless the poll is demanded. In such an event, Chairman of the company may ask the board members to cast votes by raising their hands. When asked, the board members raise one hand each, and finally, the Chairman evaluates the total vote and decides who is against and with the resolution. This voting method is commonly used in almost all companies pan India.

Under the poll system, the voting is done according to the voting rights mentioned under the article of association. The member who holds a higher number of shares is more likely to become a part of this voting system.

The notice regarding the meeting shall be given to the relevant board members. In addition to this, the absentees’ members would not hold any value in this meeting, nor were they eligible to cast a vote. Radically, the ordinary resolution is passed at AGM (Annual General Meeting) in the presence of the board member.

Certain items come under the category of an ordinary resolution.

What is Special Resolution?

Special Resolution (SR) is a resolution that seeks the majority of votes from the board members to come into the action. Approval of the special Resolution can only be possible in the case when the votes cast in favor is three times greater than the vote cast against it. The special resolution only comes into action when it is approved at the AGM.

The notice regarding the general meeting must be given to the members, and the notice should clarify the Special Resolution’s scope and the intention.

The following purposes fall in the category of special resolutions.

A special notice meant to serve the company must be signed either collectively or individually by the board member, holding one percent of the total voting power or holding share whose face value doesn’t exceed five lakh rupees.

Notice to the company

The members must send such notice to the company as soon as in a period of three months, but at least fourteen days before the annual general meeting.

The Company shall promptly give its members notice of the resolution as soon as the notice falls at their disposal. This action must be pursed at least seven days before the Annual General meeting.

Where it is not possible to notify the member like a general meeting, English and vernacular newspaper can be used for the notification purpose. The publication must have a wide circulation in the State where the company’s office is situated.

If the company failed to serve the above purpose, such notice should also be shared on its website. It’s worth noting that the publication of the notice must be done at least seven days before the meeting. The criteria cannot be tempered as it is the essential provision of the resolution requiring special notice.

Point to be remembered in regards to the AGM

Most of you might find it challenging to understand the concept of a resolution requiring special notice through the rule book. We believe that you will find the above information helpful and productive at the same time.  However, if some of you have some different thoughts in this regard, then don’t worry, we still got you covered. Our comment section is alive, and it works day in and day out just for your benefit. So don’t hesitate to provide your valuable feedback or queries in the comment section.

Read our article:Circulation of member resolution: Everything you need to know

One Person Company is a new business concept introduced under the Companies Act, 2013. As the name suggests, One Pe...

An Complete Overview on Compul...

CCPS is also known as Compulsory Convertible Preference Shares which is a well-recognized investment instrument pre...