Demand for Poll under Companies Act 2013: An Overall Regime 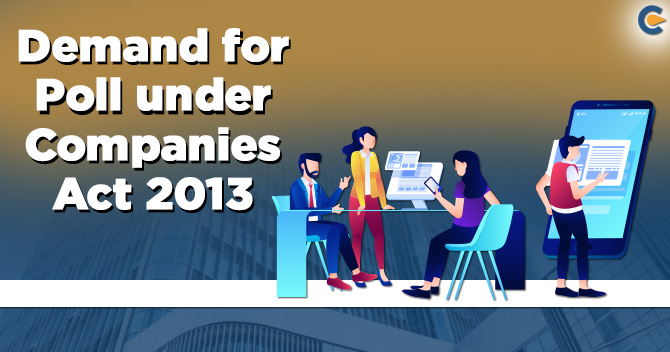 In consonance with Legislative experiences on Demand for Poll, Clause 109 pursues to deliver on a declaration of result of voting on any perseverance by a ‘show of hands.’ Chairman of the Meeting on his own or demand made identified by members order for a poll corresponds to ‘sections 179, 180, 184 and 185’ of the Companies Act, 1956 (now 2013)[1].

This clause additionally provides that the persons who made the demandmay withdraw the unchanged demand/request. With this, the chairman of the Meeting shall appoint a scrutinizer for observing votes given on poll and report thereon and the poll process. Moreover, the conference’s decision on the resolution deemed to be the outcome of the poll. The chairman will control how the poll shall get occupied.”

What do you mean by Demand for Poll and withdrawal for the same?

Considering Demand for Poll, the sub-section (1) of section 109 seeks to provide Chairman of the Meeting might on his own or shall on demand for a poll made by specified member’s order, on any resolution by a ‘show of hands’ before or on a declaration of result of the voting.

Moreover, when it gets exercised ‘suo motu,’ then such power to order poll is meant to be discretionary/unrestricted. When the specified number makes the demand of members, this decision gets intended to be taken away or completed.

There are the considered numbers of members obligatory to make a demand for the poll, which are as follows:-

From now, a demand for a poll may be completed by a proxy also. Additionally, demand for the poll can be made by a single member holding required voting power or shares on which shares in the paid-up share capital of the company as prescribed/specified above or required amount is paid up who is holding voting power.

Any demand for poll may be withdrawn by the persons who made the demand, provided under sub-section (2) of the Act. Other than the business for which a poll (as demanded) is incomplete, it may be expected that any business can be sustained without coming up with such business of poll demanded results.

As delivered in section 47, sub-section 1clause (b), it can say that the voting rights of a member on poll are in proportion/fraction to his share of the company in the paid-up equity capital of the same. On the other hand, this provision is subject to section 43 and sub-section (2) of section 50 of the Act.

What are the Three Objects for which the poll may demand at the Meeting of Company?

What meant for Timings of conducting the poll?

According to the Secretarial Standard-2 para 9.2, it provides that the chairman shall inform the members if the venue, time, and date of taking the poll cannot be publicized at the Meeting. Moreover, the time and the modes of such communication must be within 24 hours of closure of the Meeting in any case.

It was apprehended that the word ‘immediately’ meant as soon as possible wherever the articles of association provided conditions for a poll to be taken “immediately.” In such cases, a member can participate and vote in the poll, which did not attend the Meeting.

What is Appointment of scrutinizers at the Meeting of Company?

For observing the votes given on poll, poll process, and report thereon, the chairman of the Meeting shall appoint a scrutinizer for the company at Meeting. The result of the poll will consider the decision of the Meeting, which is depending on resolution. Moreover, the chairman shall control the manner in which poll shall be occupied.

According to the Secretarial Standard-2 para 9.4, it provides that the scrutinizer (s) may be:-

Who is not in engagement/service of the company, such scrutinizer may take support of a person. Moreover, the condition says that such a member is available and willing to be appointed, at least one of the scrutinizers intend to be a member is present at the Meeting of company.

Any vote by-poll will be put to the vote distinctly considering in each resolution put to. According to the ‘Secretarial Standard- 2 in paragraph 9.3’, one ballot paper possibly will be utilized for more than one item only.

What are the Powers of Chairman to regulate the manner of Meeting?

Chairman has powers to regulate how poll is to be taken under Sub-section (6) of section 109. Concerning the same, this power is subject to other provisions in the section. According to the Secretarial Standard-2 per para 9.2, he has powers to permit any member to appear during counting of votes in the Meeting.

What are the Powers of the scrutinizers on demands for polls?

The chairman’s responsibility is to ensure that the scrutinizers intend to be provided with the register of members, attendance, specimen signatures, ‘proxy and representation documents,’ and ‘register and register of proxies.’ The Scrutinisers shall assemble for polling papers in form MGT-12 only. The empty polling boxes will get sealed in presence of members, and proxies which are to be unlocked in presence of two witnesses only after voting process.

What is the Procedure required while Demand on Poll?

It should be guaranteed that members who have voted electronically or ballot papers under 35B (2) of registered agreement are not exercising their voting right another time at the company’s General Meeting.

Read our article:Right to Inspect by Members of the Company

What is the issue’s on the result of the poll after the process?

What are the Provisions not Pertinent in case of Electronic Voting?

According to the general ‘Circular no 20/2014’, it provides that the provisions relating to demand for poll are not pertinent for the companies which are providing voting done over electronic means (under section 108 read with rule 20). This explanation is issued as both at poll and at voting through electronic means keep an eye on the proportion principle essentially.

What is the relevance of the section to private company?

What is the nature of Punishment in Contraventions? Multifaceted

Infringement as per Sections

This section does not recommend any penal provision for contravention of the section. Henceforth, section 450 of the Act will be appropriate. In view of that, the punishment for infringement, the company, and every offer of the company who is in default must be punishable with a fine up to Rs. 10,000. If the contravention is an on-going one, then the fine shall be Rs.1, 000 for every day of such infringement.

Infringement as per Rules

According to rule 30 of Companies (Management and Administration) Rules, 2014, the contravention of rules made under this section. With this, the company and every officer of the company in default are carrying a punishment and a fine up to Rs. Five Thousand, where the contravention is a continuing one, then the fine shall be Rs. 500 for every day of infringement. The crimes committed under this section and rules are multi-facetted under section 441, as stated above.

What are the Documents required while Demand on Poll?

What MCS had come up amid COVID-19 outbreak concerning Demand for Poll?

During the predominant time of COVID – 19 pandemic and consequent government lockdown in India, the MCA (Ministry of Corporate Affairs) has been playing a vigorous role in applying numerous relaxations and directives while taking understanding of the public health issue in advance to the citizen.

In continuance of its ‘circulars dated March 19, 2020, and March 24, 2020’ whereby definite compliance relaxations were presented, MCA has now dispensed two numbers of circulars dated (“Circular 1“) April 8, 2020, and (“Circular 2“) April 13, 2020. Those are for relaxation of special resolutions and ordinary in light of the current extra-ordinary conditions.

In this circular, the MCA has requested companies to take all pronouncements of urgent nature. It should be requiring the members’ endorsement other than for items of ordinary business and matters where any person concede a right to be heard through the apparatus of postal ballot/e-voting, deprived of the physical presence of members holding a general meeting.

According to the vide Circular 2, the MCA, while illuminating the issue of dispatch of notices by companies through post. The members of their ‘assent or dissent’ communication on appropriate resolutions should be by post under the current conditions.

It has also stated that while such companies are managing any matter only by postal ballot, up to June 30, 2020, or any further notification provided. Moreover, the “Rules” are similar to the framework delivered in the Circulars would be pertinent mutatis mutandis. All the requirements are delivered in Rule 20 of the Companies (Management and Administration) Rules, 2014.

E-Voting on Demand for Poll

If demand for poll is made under Section 109 of the Act, less than fifty (50) members voting shall be piloted through e-voting scheme. Moreover, chairman shall guarantee that the e-voting system’s facility is obtainable for voting throughout the company’s Meeting.

If in cases where less than 50 members are present in the General Meeting, the chairman may deport a vote by show of hands, if not a demand for poll is made under Section 109 of the Companies Act, 2013.

The companies must ensure that all additional compliances connected with the provisions regarding general meetings or the making of disclosures, or approvals for voting by bodies corporate, examination of related documents/registers by members, etc. as conveyed in the Act. Moreover, the articles of association of the company are to be accomplished through electronic mode only.

If you would like more appropriate information or detailed assistance as per your requirements in formulating for your Annual General Meeting, please connect with our Corpbiz Professionals. Our Corpbiz group will be at your disposal if you want expert advice on any aspect of Entity Compliances and registration. We will support you to ensure complete compliances as per your desired activities, safeguarding the fruitful and well-timed completion of your inquiry.

Several provisions are applicable to the registered companies under the Companies Act, 2013[1]. These provisions ar...

The common stock shareholders have definite rights pertinent to their ‘equity investment’ in a company. The rig...