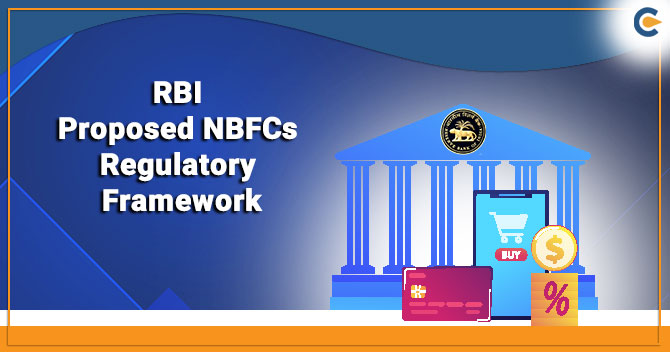 With some NBFCs witnessing systematic upscaling over the years due to their network, size, and complexity, the Reserve bank of India has sought to examine their regulatory framework via a scale-based approach.

On Jan 22, 2021, RBI came up with a discussion paper related to the regulatory framework for NBFCs that emphasize the bucketing of NBFCs into four layers. These are as follows:-

Corresponding to each layer, RBI has set out regulations around concentration norms, capital requirement, governance & disclosures in the discussion paper. The section below will render a brief insight into the proposed regulatory framework.

How RBI Proposed the Bucketing of NBFCs?

According to the Reserve Bank paper, the nature of the activity will play a key role in determining the base & middle layer NBFCs. Therefore, NBFC-BL will comprise of NBFCs tagged as NBFCs (NBFC-ND), also Type I NBFCs (that lack access to customer interface or public funds), NOFHC (Non-Operative Financial Holding Company), NBFC P2P (Peer to Peer), and NBFC-AA (Account Aggregator).

Given that these entities are less likely to encounter any systemic risk related to their activities, they can rejoice less-stringent regulation, as per Reserve Bank.

Moreover, SPDs (standalone primary dealers), NBFC-HFCs, infrastructure finance companies, core investment companies, and infrastructure debt funds (IDFs), regardless of their asset size, shall be a part of this bucket.  The upper layer’s determination, i.e., top 50 NBFCs, will be done based on the different parameters as given below.

Note: % manifest the degree of relevancy) As per Reserve Bank, the top 10 NBFCs in India shall be treated as a part of this category.

For now, the top layer shall stay empty. However, Reserve Bank can push certain NBFCs to the top layer if some upper layer NBFCs encounters any systemic risk in this context.

What are the Proposed Changes in Regulatory Framework NBFCs under Each of the Layers?

The proposed regulatory changes revolve around governance/disclosure norms, capital, and concentration norms. There are no drastic changes in NBFCs (BL) regulations except in the area of NPA classification. The asset size limit has been set at INR 1,000 crore, which was previously capped at INR 500 crore, routing more NBFCs to the base layer. Further, RBI proposed to tighten up entry norms by increasing mini.net owned funds criteria to INR 20 crore from INR 2 crore.

RBI has proposed some governance alterations for the base layer, but more considerable changes have been projected for NBFCs falling in the upper & middle layer.

As of now, no such requirement has come under the light. Most of the changes are confined to concentration and governance norms. Presently, NBFCs were obligated to maintain a mini Capital to Risk Assets Ratio (aka CRAR) of 15% with mini. Tier I of 10%. Middle layer NBFCs will remain isolated from such a change.

Presently, concentration norms for NBFCs are set out independently for lending & investment exposures (15% for each borrower & 25% for a group of borrowers. This is estimated as the net owned funds’ percentage. For middle layer NBFCs, the Reserve Bank has envisaged merging the investment & lending thresholds into a single exposure limit of 25% & group exposure of 40%, estimate as a percent to Tier 1 capital (rather than a net owned funds).

Compared to banks where single and group exposure limits at set at 20% and 25%, respectively, these limits seem relaxed for NBFCs (ML). Given that NBFCs ND-SI already follows a ninety days NPA (Non-performing Asset) classification form, the impact on NBFCs (ML) remains next to negligible.

While the Reserve Bank has acknowledged the relevancy of rendering ample flexibility in operations & not setting out stringent sector-specific exposure limits, it has a drastic impact on IPO financing by proposing an INR 1 crore per NBFC ceiling. It has also set out specific limitations on lending- buy-back of shares, credit to directors/their relatives, etc.

From the governance standpoint, RBI has proposed the remuneration committee’s constitution, additional disclosures for NBFCs (ML), and rotation of statutory auditors.

As per RBI, the regulations for NBFCs (UL) will stay in line with that of banks. Given the operation scalability & the systemic significance, the Reserve Bank envisages tightening the norms for the top 25-30 NBFCs.

For example, banks poised under the Basel III framework were obligated to maintain a mini. Common Equity Tier 1 (CET 1) capital capped at 7.375 percent, including capital conservation buffer. The Reserve Bank has proposed to set out CET 1 for upper limit NBFCs, at 9%.

Likewise, NBFCs poised under the upper layer should ensure conformity with the leverage requirement. Following is the mathematical expression for formulating leverage ratio under Basel III.

Therefore, the Leverage ratio is inversely proportional to the bank’s exposures- any increment in exposure’s value shall reduce the leverage ratio.

In light of the above facts, it seems that RBI’s proposal for a tighter regulatory framework for NBFCs across this country may strengthen the balance sheet. With proper categorization in place, RBI[1] can ensure proper monitoring of all NBFCs and keeps the unfair regulatory treatment at bay. The four-tier structure will ensure the appropriate inculcation of compliances.

The banking & financial sectors are the growth-oriented sectors of this nation. The advent of Non-Banking Finan...

In the past few years, the banking structure of the country has improved a lot. But there is still a room of improv...