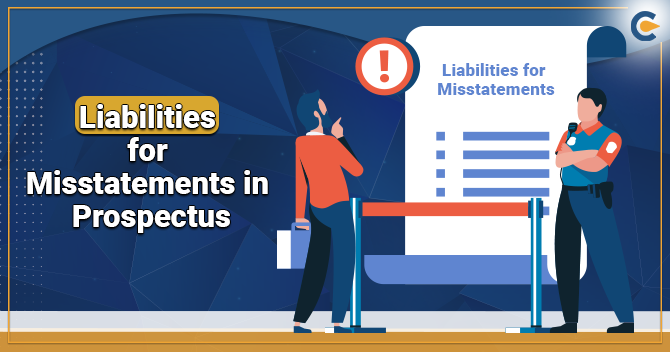 Legal Connotations for the Misstatements in Prospectus

The information includes in the prospectus helps the public to identify the growth prospect of the company. As of now, the prospectus is the only legitimate source through which the public can decide whether to go for the investment or not.

There are instances when matter associated with the representation for the upcoming events has been questioned. A demonstration of the misleading information that promises that something will happen in future will invoke the liability for misstatement.

Read our article:How to Avail a Company Registration Certificate?

Liabilities for Misstatements in the prospectus

The liabilities related to Misstatements in prospectus can be encompassed under the given heads:-

Civil Liabilities for the Misstatement in Prospectus

Civil liability for misstatements will come into existence when an individual has encountered any loss or damage by subscribing company’s securities based on a misleading prospectus (Sec. 35). In such scenarios, the given individuals shall stand liable under sec. 447 and will have to furnish compensation to individuals who have encountered such loss or damage:

Exemption from Liability for Misstatement in Prospectus

Issuance of Prospectus to Deceive or any other Unlawful Purposes

Criminal Liability for the Misstatement in Prospectus

An individual who stamps his/her approval for the issuance of prospectus with invalid or misleading statements will face penalties under Sec. 34. Such a penalty is for fraud as defines under Sec 447. As per the said section, the term “fraud” defines as an act, concealment, omission of any fact with an aim to trick, gain undue advantage, or disrupt the interest of the organization or its shareholders or its creditors, or any other individual.

A person who authorizes the issue of a prospectus that has untrue or misleading statements is liable for punishment under Sec. 34. Such a punishment is for fraud. It is not necessary that the said action involve any wrongful loss or wrongful gain. Mistreatment of position by an individual is also deemed fraud as per this section. Sec. 447 further laid down the penalties for fraud:

The organization should pay extra attention while drafting the prospectus for the general public. The prospectus should undergo reoccurring scrutiny for any misstatements or anomalies before making it publically accessible. The Companies Act[1] has provisions in place to penalize the unlawful act in this regard.

Therefore, the organization needs to maintain the integrity of the information that goes into the prospectus. The general public takes prospectus into account to make investment decisions. Remember Misstatements in prospectus can be detrimental to a company’s reputation or its presence in the given market.

Read our article:What is Cost of Company Registration in India?

Everything requires proper management so that it can function correctly. The same thing goes for a Private Limited...

Issue of Bonus Shares under Co...

Bonus Shares are given to shareholders as some additional shares, based upon the number of shares the shareholders...